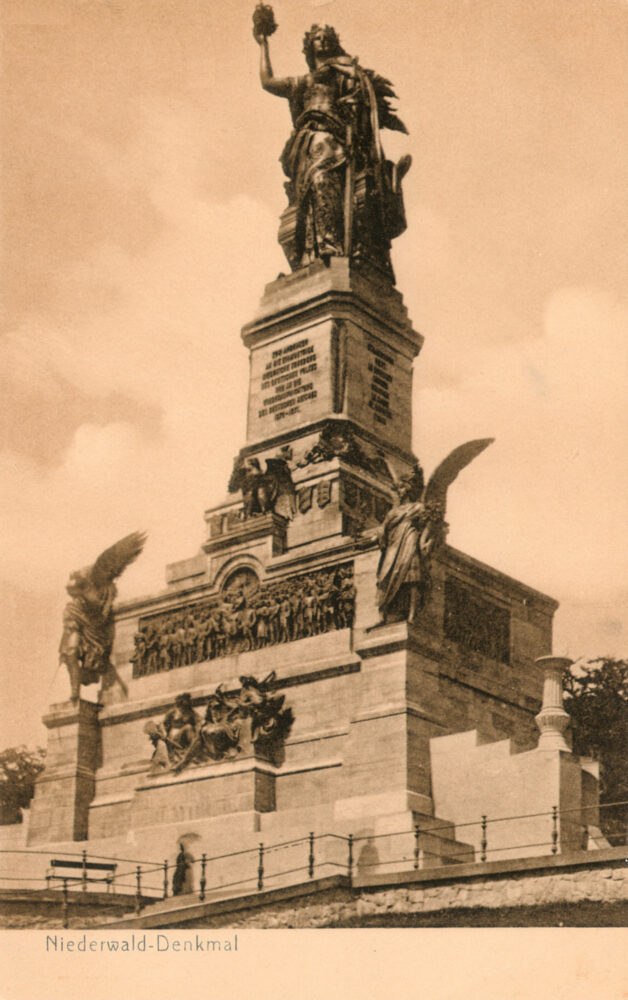 The monument was constructed to commemorate the founding of the German Empire in 1871 after the end of the Franco-Prussian War. The first stone was laid on 16 September 1871 by Kaiser Wilhelm I. The sculptor was Johannes Schilling, and the architect was Karl Weißbach. The total cost of the work is estimated at one million gold marks. The monument was inaugurated on 28 September 1883. The 38 metres (125 ft) tall monument represents the union of all Germans. The central figure is the 10.5 metres (34 ft) tall Germania figure. Her right hand holds the recovered crown, and her left holds the Imperial Sword. Beneath Germania is a large relief depicting Kaiser Wilhelm I riding a horse with the nobility, army commanders, and soldiers. The relief has the lyrics to “Die Wacht am Rhein” (Watch on the Rhine) engraved. The right side of the monument is considered the “peace statue”, while the left is considered the “war statue.”
Wikipedia

[Via Google Translate]
Standing in front of the Niederwald monument is impressive because of its sheer size. The entire facility is 38.18 meters high and weighs around 75 tons in total. The most striking and at the same time largest part is the Germania placed on the upper pedestal and visible from afar . It alone reaches a height of 12.5 meters and weighs around 32 tons. The main inscription commemorating the Franco-Prussian War and the unification of the empire is carved into the base at her feet. It reads in capital letters: “In memory of the unanimous, victorious uprising of the German people and the reestablishment of the German Reich 1870-1871”. Directly below is the main relief, which depicts a total of 133 people. These are primarily generals and princes who played an important role in the founding of the empire and in the preceding war against France. You can also see a Prussian guard with a flag and a Saxon infantryman carrying a drum. Wilhelm I is depicted in the center of the relief. He is the only figure sitting on a horse and surrounded by all the others. This emphasizes its importance once more. All people shown are life-size.
Niederwalddenkmal.de :: Alles Rund um das Niederwalddenkmal