When the Seven Years’ War ended with the signing of the Treaty of Hubertusburg in 1763, and Prussia had survived the latter without territorial losses, Frederick the Great resumed his construction activities. The New Palace was erected in the western part of Park Sanssouci between 1763 and 1769. Frederick’s New Palace marks the symbolic end of an era, since after its completion no further baroque palaces were built in Prussia.
Sanssouci Park Potsdam

The New Palace is a palace situated on the western side of the Sanssouci park in Potsdam, Germany. . . In an architectural form, Frederick the Great sought to demonstrate the power and glories of Prussia attributing it as fanfaronade, an excess of splendor in marble, stone and gilt. For the King, the New Palace was not a principal residence, but a display for the reception of important royals and dignitaries.
. . .
After the death of Frederick the Great in 1786, the New Palace fell into disuse and was rarely occupied as a residence or entertainment venue. However, starting in 1859 it became the summer residence of the German Crown Prince, Frederick William, later German Emperor Frederick III. The palace was the preferred residence of Frederick and his empress, Victoria, throughout the 99 Days’ Reign. During the short reign of Frederick III, the palace was renamed “Friedrichskron Palace” (Schloss Friedrichskron) and a moat was dug around the palace. The accession of Wilhelm II saw renovation and restoration within the palace being carried out with the installation of steam heating, bathrooms in state apartments and electrification of the chandeliers which Frederick the Great had collected from across Europe. Until 1918, it remained the preferred residence of Wilhelm II and the Empress Augusta Viktoria. After the November Revolution and the abdication of Wilhelm II, the New Palace became a museum and remained such until the Second World War.
Wikipedia.

The New Palace is a baroque palace and consists of a three-winged corps de logis (residential wing) around a courtyard with low side wings. The three-wing system has a front length of 220 meters. The facade is characterized by a reddish brick pattern and fluted Corinthian pilasters made of sandstone in colossal order. The red brick was only painted on for cost reasons. . . . The middle section of the two-and-a-half-storey building – with a mezzanine – is crowned by a huge, functionless 55 meter high main dome. The Three Graces group is located on the dome. The dome is only used for architectural decoration and has no other purpose. It does not contain any space. The two single-storey pavilion-like side wings have an L-shaped floor plan. They also each have a dome.
Best of Potsdam 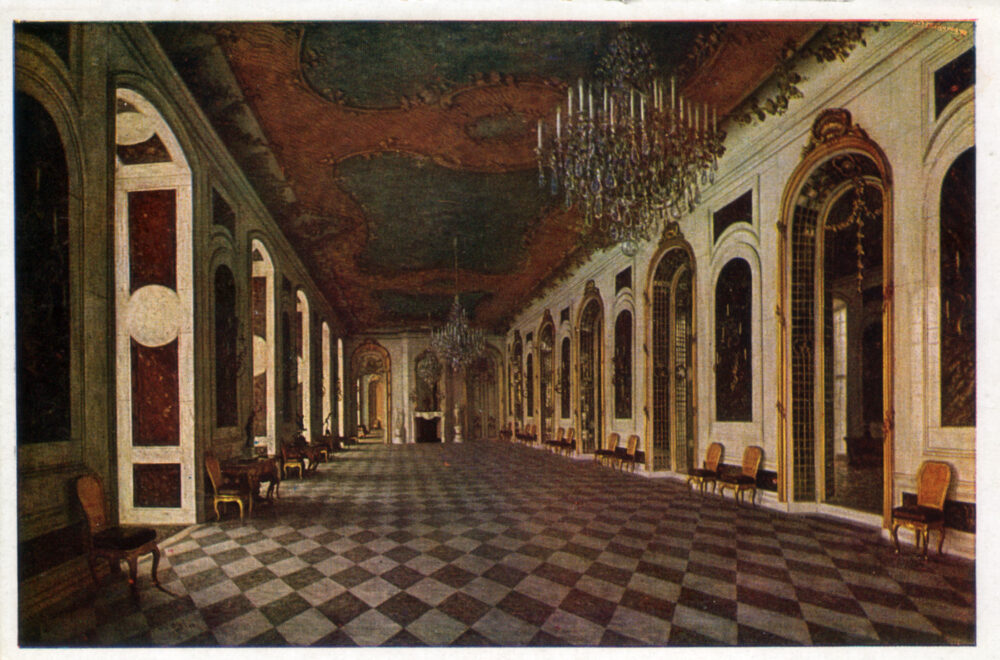 (Via Google Translate)
The marble gallery to the south led to the king’s apartments. Red jasper and white Carrara marble dominate the picture in this long hall. French doors let a lot of light into the interior. Three ceiling paintings connected by a rich gold ornament symbolize the times of day – the night, the morning and the noon. They are works by the painter Bernhard Rode. The division of fields and framing stucco are based on the ceiling design of the much smaller gallery in Sanssouci Palace.
Wikipedia.. 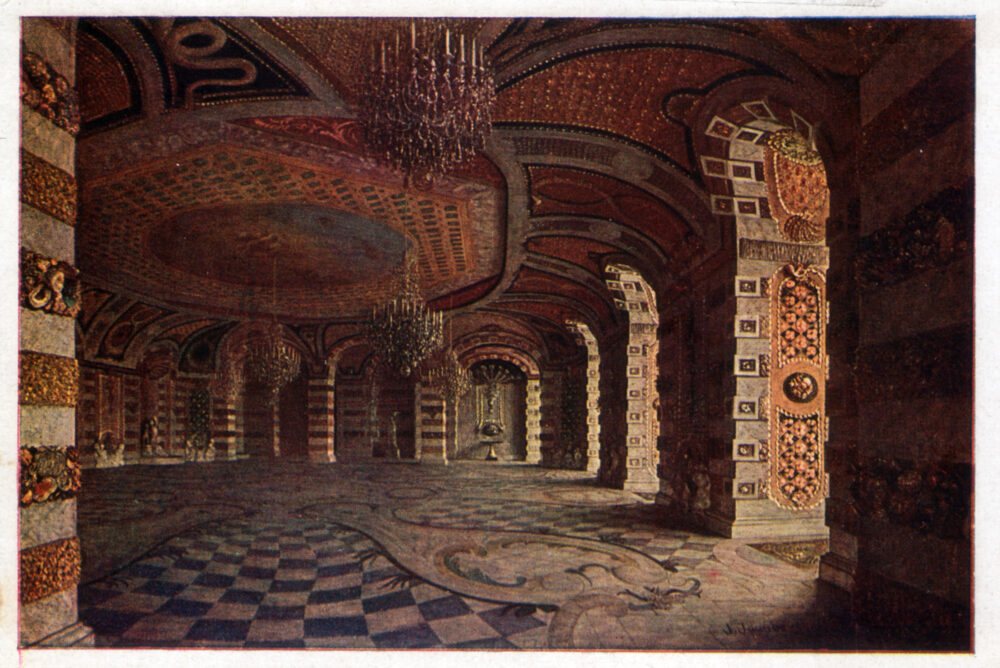 As a visitor, you first enter the vestibule. Then you come to the grotto or shell hall. Over 20,000 different minerals, ores, fossils, shells and snails, rocks and artefacts adorn and decorate the garden room designed as a grotto. The hall was originally designed a little more simply, but the walls were further enriched with minerals, fossils and semi-precious stones in the 19th century.
Best of Potsdam

On the ground floor behind the vestibule is the Grotto Hall, attributed to Carl von Gontard, with walls encrusted with shells, stones, marble, quartz and semi-precious stones, which were enriched in the 19th century. Part of the design of the Groto Hall is a marble floor depicting marine animals and plants and an 1806 ceiling painting, Venus and Amor, the Three Graces and Putti. Attributed to Johann Gottfried Niedlich, the painting has replaced an earlier work. Niches around the room contain statuary and fountains, with cut crystal chandeliers hung in the arches.
Wikipedia.