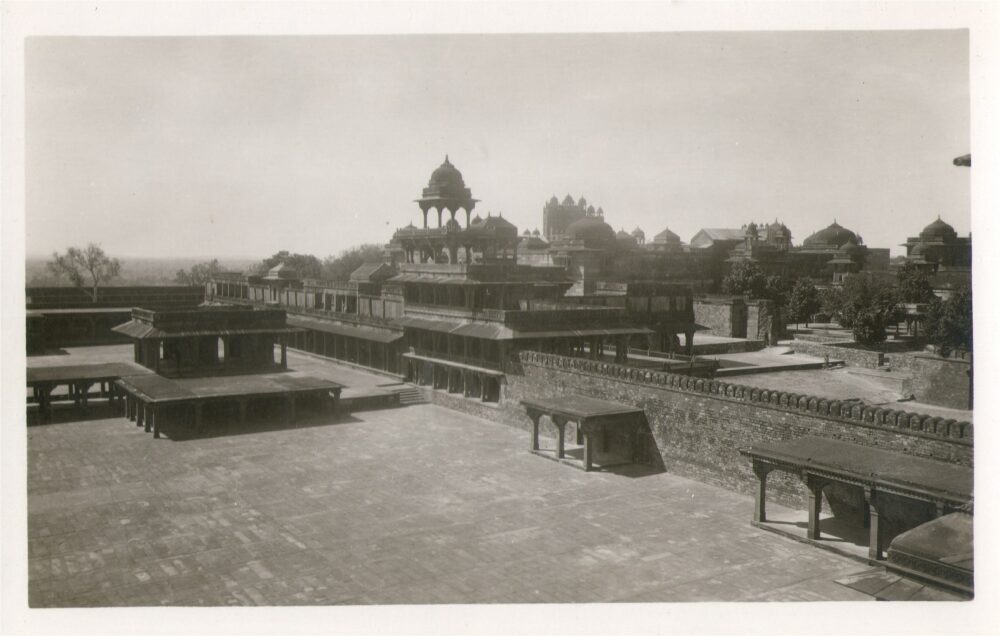 No details on card.

Fatehpur Sikri is a town in the Agra District of Uttar Pradesh, India. The city itself was founded as the capital of Mughal Empire in 1571 by Emperor Akbar, serving this role from 1571 to 1585, when Akbar abandoned it due to a campaign in Punjab and was later completely abandoned in 1610.
Wikipedia

Built during the second half of the 16th century by the Emperor Akbar, Fatehpur Sikri (the City of Victory) was the capital of the Mughal Empire for only some 10 years. The complex of monuments and temples, all in a uniform architectural style, includes one of the largest mosques in India, the Jama Masjid.
UNESCO World Heritage Listing

Fatehpur Sikri is the famous deserted city, about twenty-three miles from Agra, built by Akbar. It was formerly merely a village, called Sikri, celebrated as the abode of Sheikh Salîm Chishti, a Muhammadan pîr, or saint. In 1564, Akbar, returning from a campaign, halted near the cave in which the saint lived. The twin children of his Rajput wife, Mariam Zâmâni, had recently died, and he was anxious for an heir. He consulted the holy man, who advised him to come and live at Sikri. The Emperor did so, and nine months afterwards Mariam, who was taken to Chishti’s cell for her confinement, gave birth to a son, afterwards the Emperor Jahangir. He was called Sultan Salîm in honour of the saint. Jahangir, who describes all these circumstances in his memoirs, adds: “My revered father, regarding the village of Sikri, my birthplace, as fortunate to himself, made it his capital, and in the course of fourteen or fifteen years the hills and deserts, which abounded in beasts of prey, became converted into a magnificent city, comprising numerous gardens, elegant edifices and pavilions, and other places of great attraction and beauty. After the conquest of Gujarat, the village was named Fatehpur (the town of victory).”

The glory of Fatehpur Sikri was short-lived. Akbar held his court there for seventeen years, and then removed it to Agra; some say on account of the badness of the water supply, others that the saint, disturbed in his devotions by the bustle and gaieties of the great city, declared that either he or Akbar must go.
A Handbook to Agra and the Taj Sikandra, Fatehpur-Sikri and the Neighbourhood (1904)