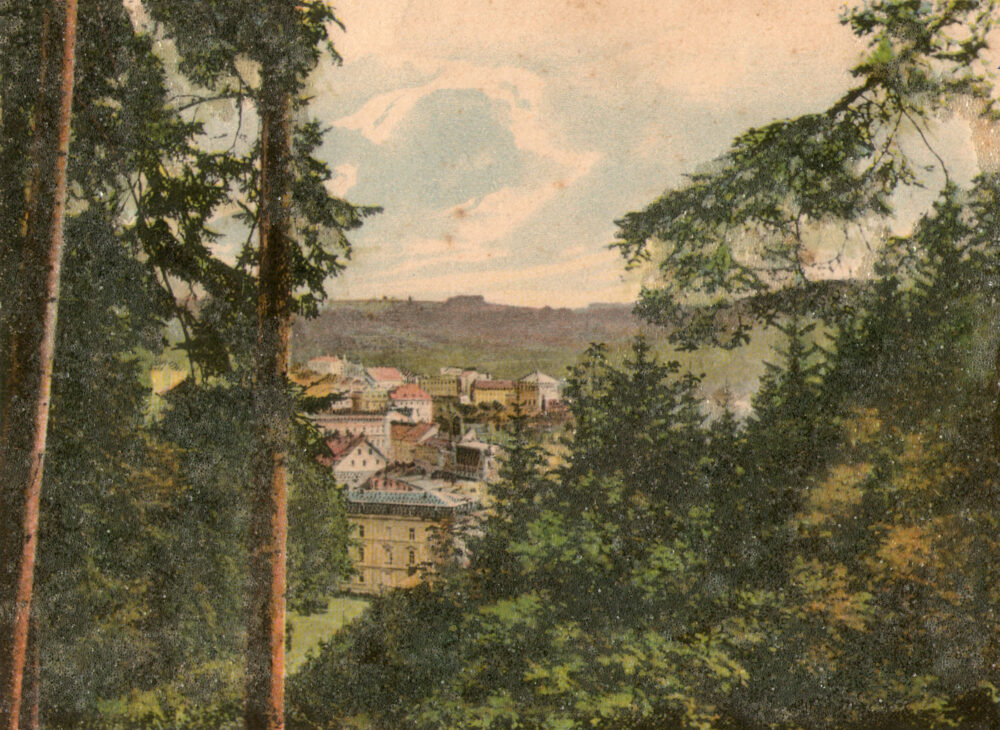 Card is covered with sparkles, which show in scan as white patches

The period between 1870 and 1914 was Mariánské Lázně’s heyday, reflected to this day in its numerous renovated Art Nouveau spa houses, hotels, colonnades and churches, designed by architects such as Friedrich Zickler, Josef Schaffer, Arnold Heymann and Josef Forberich. The spa parks were enlarged, and idyllic viewing points were created high above the town. In 1872, the railway line linking the town with Cheb, Vienna, Prague and Pilsen was opened and in 1898 the line to Karlovy Vary was completed. During this period, many more great names came to take the waters in Mariánské Lázně – these include Gustav Mahler, Friedrich Nietzsche, Franz Kafka, Rudyard Kipling, Mark Twain, Thomas Alva Edison, Pierre de Coubertin, King Edward VII of England, the Czar Nicholas II and Emperor Franz Joseph I.
The Official Tourist Website for Marianske Lazne

Although the town itself is only about two hundred years old, the locality has been inhabited much longer. The first written record dates back to 1273, when there was a village of Úšovice. The springs first appear in a document dating from 1341 where they are called “the Auschowitzer springs” belonging to the Teplá Abbey. It was only through the efforts of Josef Nehr, the abbey’s physician, who from 1779 until his death in 1820 worked hard to demonstrate the curative properties of the springs, that the waters began to be used for medicinal purposes. The place obtained its current name of Marienbad in 1808; became a watering-place in 1818, and received its charter as a town in 1868. . . . Then came a second period of growth, the town’s Golden Era. Between 1870 and 1914 many new hotels, colonnades and other buildings were constructed or rebuilt from older houses.
Wikipedia. 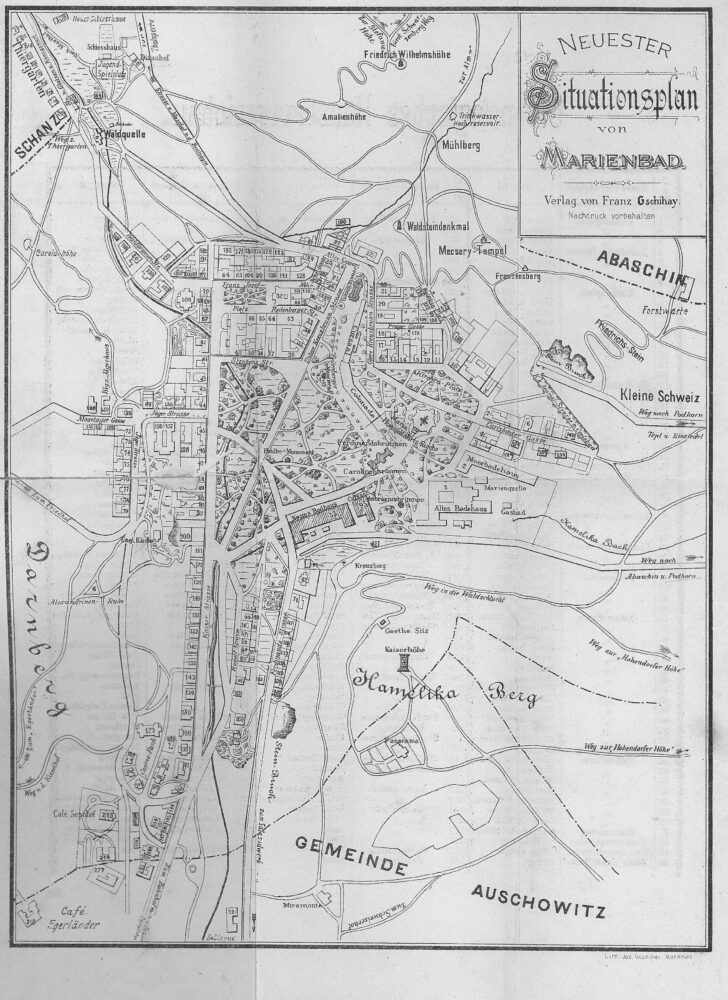 The district of the healing Springs on the brook of Auschowitz is since 1197 possessed by the abbey of Teplá. The healing power of the Springs has been known since the XVIth century. In the year of 1528 there has been attempted to get the salt from the source of Ferdinand, but without success. The systematical use of the sources, healing and economic, has been established till about the end of the XVIIIth century, by the effort of dr. Nehr and the abbots of Teplá. The previous attempts were only ephemeral. The conditions of the flourish of the place have been created by the chemical analysis of the water by the eminent specialists who declared its healing power. In the first decades of the XIXth century the sources have been couvered by constructions that are partly to see still nowadays. The first establishements date from the year of 1781 and about 1820 there was here already a great many of houses. The healing factors are the spring of Ferdinand, the Well of the Cross, the Spring of Maria, of Caroline etc., the mud-baths, the production of the salt of Teplá and the transmission of the healing water. Moreover, the beauty of the surrounding country adds much to the renown of our watering-place.
Mariánské Lázně, Františkovy Lázně (1930), “volume XVI of the series Přírodní, umělecké a historické památnosti (English translation: Natural, artistic and historical sights).”