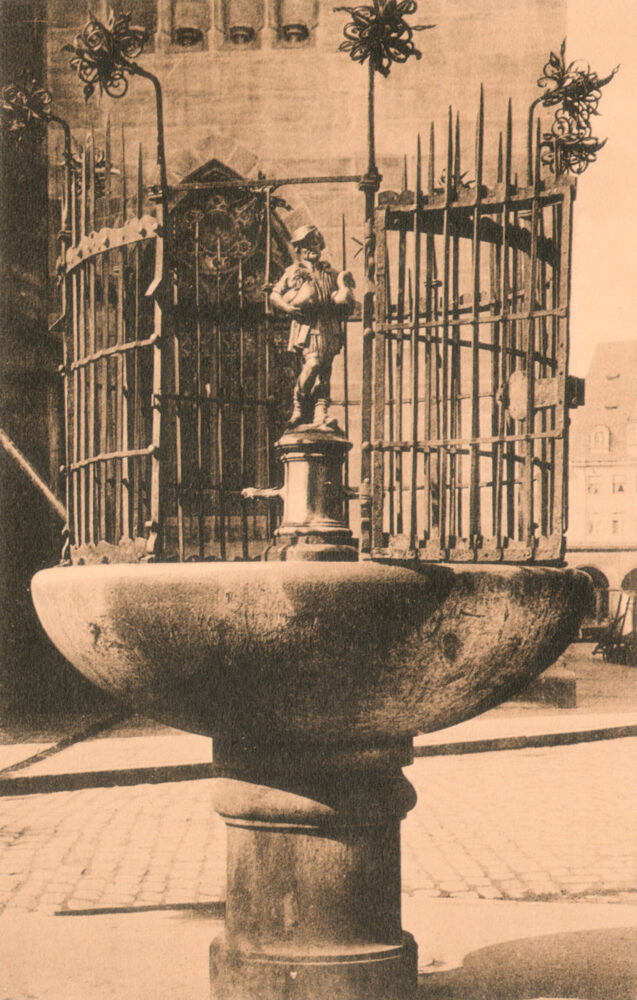 (via Google Translate)
The Goose Man Fountain is one of the oldest fountains in the city of Nuremberg . The fountain is located north of Nuremberg ‘s main market in the St. Sebald district . The name Goose Man refers to the bronze fountain figure, which depicts a farmer with two geese under his arm. . . . The ore founder Pankraz Labenwolf made the bronze goose figure in the Renaissance period, around 1550. As a template, he used a wooden model by the carver Hans Peisser , which is currently in the Fembohaus City Museum in Nuremberg. The bronze fountain figure with the two geese under the arm is based on a farmer, probably in the traditional costume of the Knoblauchsland north of Nuremberg. The fountain has a squat shaft. Above it is a renewed goblet-like sandstone basin, in the middle of which is a goose man on a pedestal. The fountain basin is surrounded by a rosettestudded wrought-iron trellis. The water drains through the two goose beaks and two tubes on the figure base.
Wikipedia.

In the absence of clear documentation (alas!) art historians are nevertheless unanimous in ascribing the Gänsemännchen Fountain to Labenwolf. He created the fountain from about 1550 to 1560. Thus Dürer’s drawings of Frankonian peasants and specifically of the “Goose-Man,” demonstrated a step-by-step evolution which culminated in the creation of this fountain. The location of the fountain was on the Goosemarket (Gänsemarkt), which later on became the Fruit Market (Obstmarkt). When World War II broke out, the fountain was moved to its present location in the Court of the New City Hall, Hauptmarkt 18. The flesh and blood “Goose-Man” came from the so-called Garlic Country (Knoblauchland) in the immediate vicinity of Nuremberg. It can easily be guessed what the farmers grew there. He was reputed to be a drunkard. After he sold his geese, he spent his money on wine and returned home empty-handed, albeit full in other respects. No doubt, this droll peasant was a unique specimen, a well-known “character” of his day.
Stein Collectors International

Nuremberg’s most famous city fountain is the Renaissance era Gänsemännchenbrunnen (The Geeseman Fountain) cast in brass. The modest fountain features a man carrying two plump geese, hence earning its famous title. The fountain is presently located at Rathausplatz, since 1945, but was originally in the Gänsemarkt (Goose market), at the southern end of the fruit market behind Frauenkirche. The figure has often been mistaken as a peasant or farmer, owing to its popular appeal, however, he is dressed in the fine period attire of an affluent Renaissance citizen. The figure’s meaning, purpose and subject have remained mysterious for centuries although the fountain’s facture has traditionally been associated with the brass caster Pankraz Labenwolf, an apprentice of the Vischer family of Nuremberg brass casters, who had established his own workshop by 1523 and foundry by 1537.

No documents are known regarding the purpose, subject or commission for the fountain. Modern local customs believe the Geeseman was a farmer from the garlic country of Northern Nuremberg who sought to sell his geese at the market, but sensing their fate they began to cry-out, inspiring the farmer to have a change-of-heart and return home with his adopted pets. . . . The sculpture’s unusual iconography and subject can be explained by certain events unfolding in Nuremberg during the advent of the Reformation and the city’s metamorphosis in the shifting tide of religious and social reorganization. The figure represents Philip Melanchthon, collaborator of Martin Luther and intellectual leader for Luther’s reformist principles. When Nuremberg adopted Protestantism in 1525 there was a sudden interruption in Nuremberg’s educational system which had formerly depended upon the church and its resources to educate its citizens. Anticipating such a problem, Martin Luther, in 1524, delivered an appeal to German cities to “establish and maintain Christian schools.”4 The Nuremberg councilmen took subsequent action to attract Philip Melanchthon to their city to help initiate and direct their first city-run school. Although invited, Melanchthon did not opt to fill a position as director, but arrived in November of 1524 enthusiastically recruiting and organizing the city’s educational program. In address to the city’s leadership, Melanchthon inaugurated Nuremberg’s first academy at St. Egidien on 23 May 1526.
Renaissance Brnoze