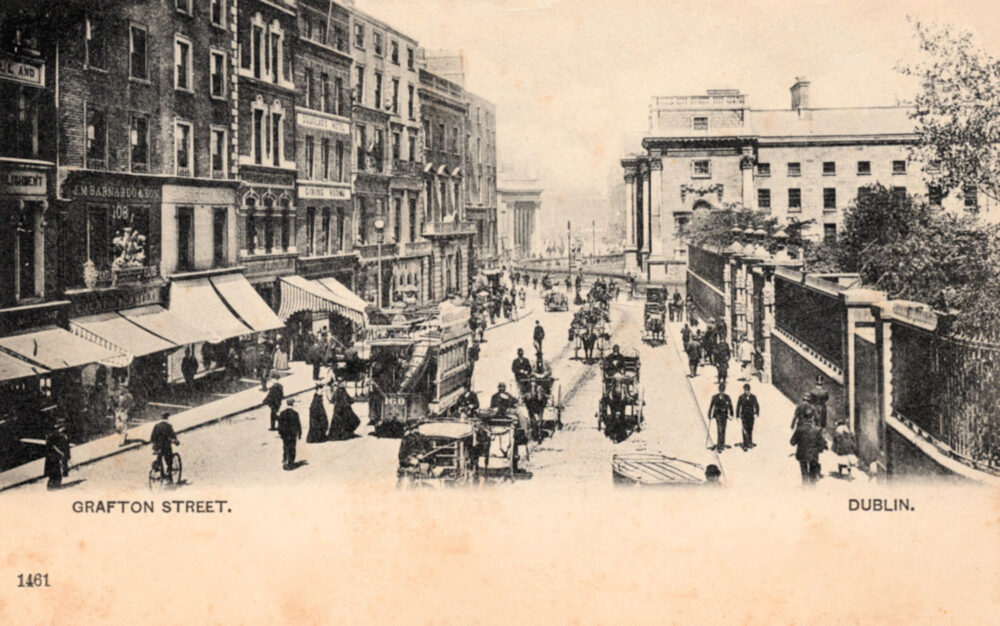 Grafton Street is one of the two principal shopping streets in Dublin city centre (the other being Henry Street). It runs from St Stephen’s Green in the south (at the highest point of the street) to College Green in the north (the lowest point). The street was developed from a laneway from the early 1700s, and its line was shaped by the now-culverted River Steyne. Initially a fashionable residential street with some commercial activity, the character of Grafton Street changed after it was connected to the Carlisle Bridge and came to form part of a cross-city route. It suffered from dilapidation and prostitution through the 19th century, with several run-down buildings. During the 20th century, it became known for the coffee house Bewley’s, mid- and up-market shopping, and as a popular spot for buskers. It has been assessed as one of the most expensive main retail streets in the world on which to rent.
. . .
From its inception, the street held a mixture of residential and commercial development. Advertisements from the 1750s and 1760s describe first-floor apartments featuring a dining room, bedchamber and closet. The street was largely rebuilt in the late 1700s, following the completion of Carlisle Bridge (now O’Connell Bridge) in 1758, spanning the River Liffey, when Grafton Street came to form part of an important north-south thoroughfare. This was supplemented by the widening and rebuilding which took place as part of the work of the Wide Streets Commission, from 1841. By the latter part of the 19th century, the street was primarily commercial in nature.
Wikipedia 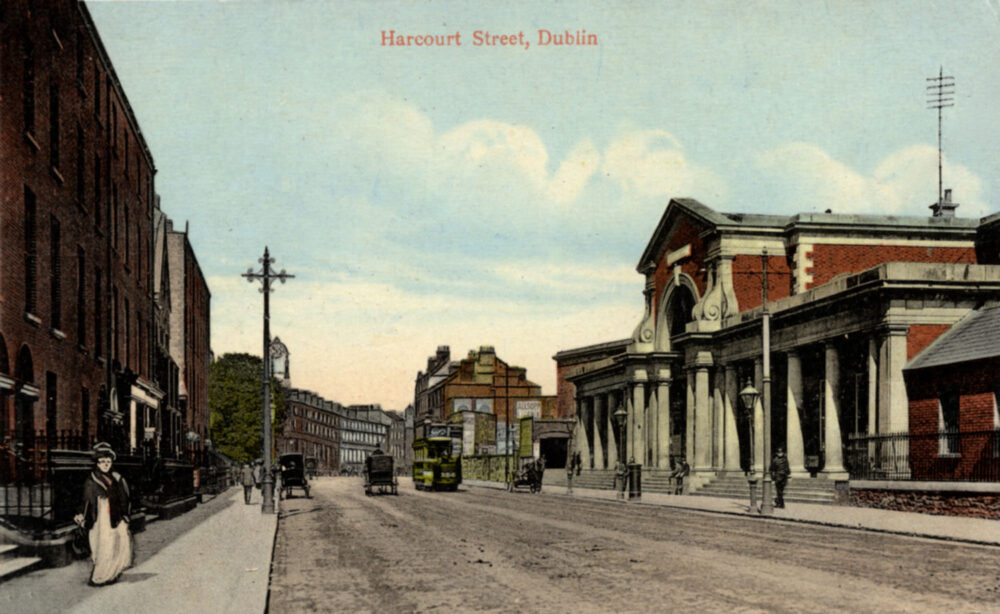 Harcourt Street Station, the long building beside the Harcourt Luas stop, opened in 1859 as a train station. A train line ran between from there to Bray and then later Wexford. The Vaults underneath the station were used to store whiskey. In 1900, on Valentine’s Day, a train carrying cattle “failed to stop” and came crashing through the wall at the end of the station dangling 10 metres over the street below.
A Stone’s Throw from Kevin Street

This monumental former railway terminal is a handsome classical example of urban railway architecture. The elegant entrance front is effectively juxtaposed with the functional railway buildings to the rear. The building retains salient features such as the portico, Tuscan colonnade and arched vaults. Skilled stonework is evident, with the facade enlivened by the textural variation between brown brick with granite in the entrance range and brick with Calp limestone in the sheds and vaults. Harcourt Street station is considered among the best work of George Wilkinson (1814-90), a noted architect of his day, who also completed the designs for a number of other railway stations in the country. Its function as the terminus of the Dublin, Wicklow and Wexford railway made it one of the most important railway buildings in the country.
National Inventory of Architectural Heritage