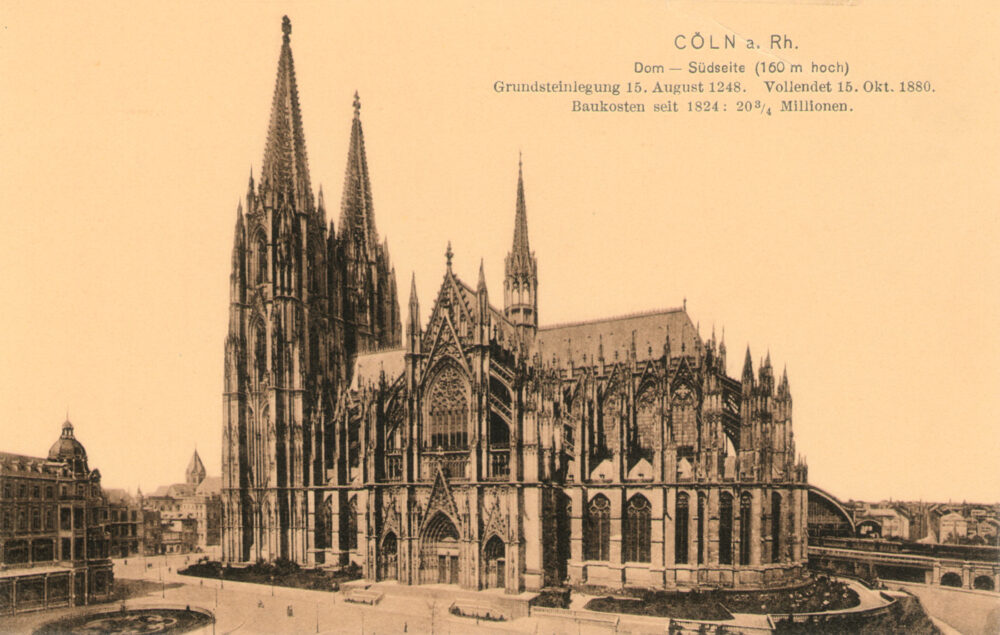 Begun in 1248, the building of this Gothic masterpiece took place in several stages and was not completed until 1880. Over seven centuries, its successive builders were inspired by the same faith and by a spirit of absolute fidelity to the original plans. Apart from its exceptional intrinsic value and the artistic masterpieces it contains, Cologne Cathedral bears witness to the strength and endurance of European Christianity. No other Cathedral is so perfectly conceived, so uniformly and uncompromisingly executed in all its parts.

Cologne Cathedral is a High Gothic five-aisled basilica (144.5 m long), with a projecting transept (86.25 m wide) and a tower façade (157.22 m high). The nave is 43.58 m high and the side-aisles 19.80 m. The western section, nave and transept begun in 1330, changes in style, but this is not perceptible in the overall building. The 19th century work follows the medieval forms and techniques faithfully, as can be seen by comparing it with the original medieval plan on parchment.
UNESCO

Construction of Cologne Cathedral began in 1248 but was halted in the years around 1560, unfinished. Work did not restart until the 1840s, and the edifice was completed to its original Medieval plan in 1880. Cologne’s medieval builders had planned a grand structure to house the reliquary of the Three Kings and fit its role as a place of worship for the Holy Roman Emperor. Despite having been left incomplete during the medieval period, Cologne Cathedral eventually became unified as “a masterpiece of exceptional intrinsic value” and “a powerful testimony to the strength and persistence of Christian belief in medieval and modern Europe”. Only the telecommunications tower is higher than the Cathedral
Wikipedia..