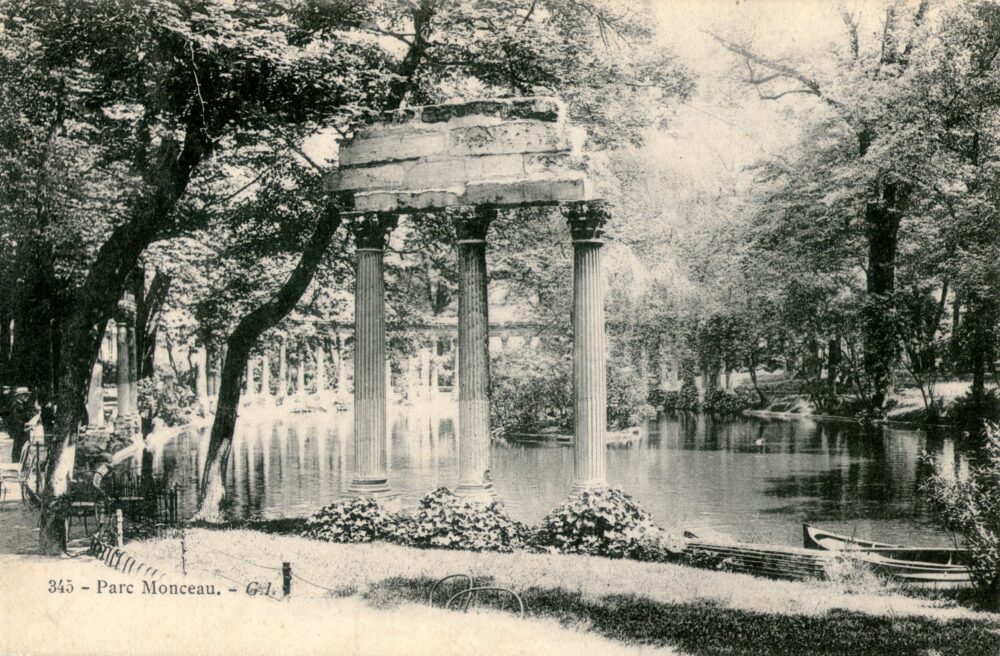 When France’s royal family want an absurdist Anglo-Chinese garden filled with an architectural pastiche from around the globe, who dares say no? Parc Monceau was built in 1778 at the request of King Louis XVI’s cousin – the Duke of Chartres, Phillippe d’’Orléans – who dreamt of opening a park that would amaze and surprise all who passed through its gates by foregrounding his eclectic taste in landscape design and architecture. What resulted was a monumental act of public folly, albeit one that possessed a tender charm all its own.

Constructed with a distinct lack of care for either the epoch or people from which he was borrowing, Parc Monceau originally contained a Roman colonnade, a miniature Egyptian pyramid, a Tartar tent, a Dutch windmill, a water lily pond, an enchanted grotto, a temple of Mars, an Italian vineyard and numerous antique statues, all within arms’ reach of each other. At the time of its debut, the garden also featured servants in flamboyant dress and exotic animals like camels. Taken as a whole, none of it it made much sense, but that had never really been the Duke’s point; unlike the Jardin d’Agronomie Tropicale which was built to mimic foreign cultures for spectatorship, Parc Monceau was built as pure fantasy.
Atlas Obscura.

Parc Monceau had its beginning in 1769 when Louis Philippe, the duke of Chartres, who was also the cousin of Louis XVI and the father of King Louis-Philippe I and who would later become the Duc d’Orléans and be known as Philippe-Egalité, purchased a hectare of land on Boulevard de Courcelles. At this time he had architect Louis-Marie Colignon build a pavillion in the middle of a French-styled garden. During 1773-1778, he acquired twelve more surrounding hectares. He built on this property, with the designing help of painter Carmontelle, a windmill, a minaret, a pyramid, a Chinese pagoda, a Roman temple, a waterfall and the “Naumachie” which is a pond half-encircled by broken Corinthian columns. . . In 1793, the now Duc d’Orléans bought more of the surrounding properties and landscape architect Thomas Blaikie transformed the garden with trees and lawns into an English-styled garden. This was one of the first landscaped parks in Paris and it become a place of festivities.
Paris Walking Tours

After the monarchy was restored, the park was returned to the family of the Duke. During the Second Empire, the family sold lots within the park to real estate developers, who built luxurious town houses, reducing the size of the park by half. The remaining part of the park was purchased by the city of Paris in 1860. All that remained of the original folly was the water lily pond, the stream and the fantasy “tombs”, including the Egyptian pyramid.

In 1860, the park was purchased by the city, and in August 1861 Parc Monceau became the first new public park in Paris to be created by Baron Haussmann as part of the grand transformation of Paris begun by Emperor Louis Napoleon. Two main alleys were laid out from east to west and north to south, meeting in the center of the park, and the alleys within the park were widened and paved, so carriages could drive the park. An ornamental gate 8.3 m (27 ft) high was installed along a newly created avenue, boulevard Malesherbes, curving paths were laid out around the park for strolling. The pavillon de Chartres was also modified by the architect, Gabriel Davioud, who had a graceful classical dome added to the structure. He also built a bridge modeled after the Rialto bridge in Venice over the stream to replace the Chinese bridge by Carmontelle that had once been there. He preserved the other follies remaining from the original garden. Haussmann embellished the park with a rich collection of exotic trees and flowers from around the world.
…
The park is unusual in France due to its “English” style: its informal layout, curved walkways and randomly placed statues distinguish it from the more traditional, French-style garden. It includes a collection of scaled-down architectural features, or follies — including an Egyptian pyramid, a Chinese fort, a Dutch windmill, and Corinthian pillars. A number of these are masonic references, reflecting the fact that Philippe d’Orléans was a leading freemason. Parc Monceau includes statues of famous French figures including Guy de Maupassant, Frédéric Chopin, Charles Gounod, Ambroise Thomas, Alfred de Musset, and Edouard Pailleron.
Wikipedia.