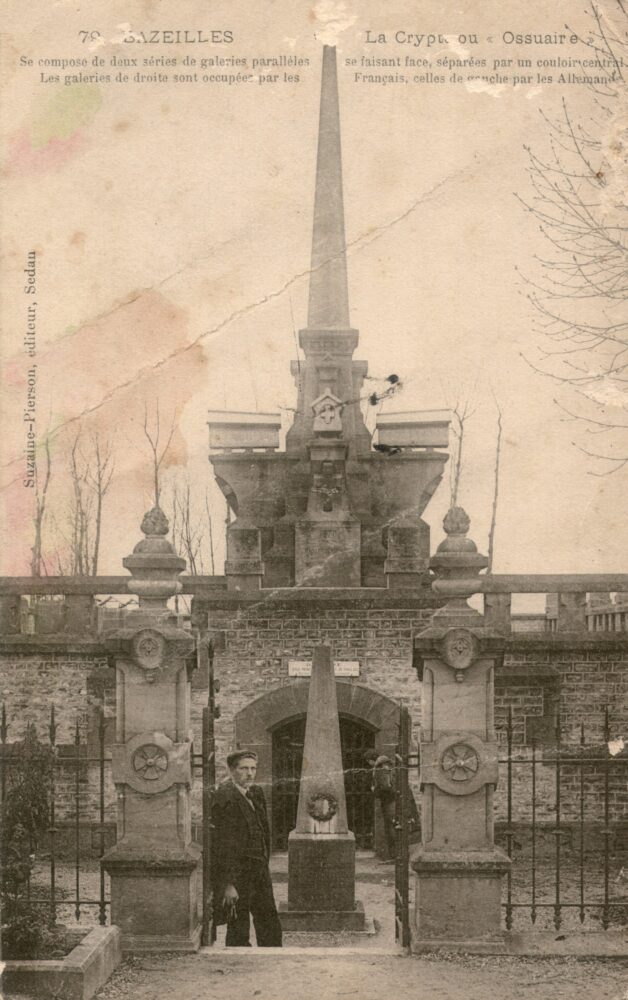 Built in 1878 by the State on grounds that it had itself purchased from various parishes and individuals, the Necropolis and Ossuary was completed in 1890. It contains the remains of about 3,000 French and German soldiers.
Nécropole et Ossuaire de Bazeilles

For Germany, it was perhaps the Prussian Wars of Liberation that had the greatest effect upon relationships between soldiers, the army, and the nation.[9] In consequence, it was not republican France but imperial Germany that pushed for a comprehensive project to bury every officer and soldier who had died in the Franco-Prussian War. Article 16 of the Treaty of Frankfurt of 1871 set the tone and established the framework for this new development, stating that, ‘The French and German governments reciprocally agree to respect and maintain the tombs of soldiers buried on their respective territories.’ Since most of the dead lay on French soil, the article can be interpreted as having been primarily motivated by concerns for the safety of German graves after the army withdrew from occupation. . . . French obligations under Article 16 of the Treaty of Frankfurt were laid out in the law on military tombs of 4 April 1873. . . . In cases where large numbers of soldiers were interred, the state undertook to construct a vault or ossuary and to erect a funerary monument.
Remembering the Franco-Prussian War Dead: Setting Precedents for the First World War

In the devastated village of Bazeilles, however, the ossuary containing the remains of all those who had died in the battle, including civillians, was designed to produce the opposite effect. Visitors could enter and view for themselves the skeletons of over two thousand victims separated into two piles according to nationality. The resulting effects was devastatingly stark and horrifit. Those who recorded their impressionsdescribed their revulsion at seeing clothing still shrouding some of the bones, a good still in its shoes and fingers still wearing wedding rings.
“Unmentionable Memories of the Franco-Prussian War”, Karine Varley, 2008 in “Defeat and Memory: Cultural Histories of Military Defeat in the Modern Era”, p. 71

You descend into the partially underground crypt, and enter a central hallway. On the left, the German side, you will find several crypts containing grave monuments and memorials. These were erected and built during the German occupation of 1914-1918. When the Germans occupied this part of France in 1914 they were absolutely horrified to discover what the French had done with the remains of these soldiers of 1870. The bodies were not buried but lay stacked, haphazardly, inside the vaults. With their well-known Teutonic thoroughness, the Germans buried their soldiers in the crypt and sealed off the graves with concrete. Fortunately they left the French cellars untouched.

On the right, the French side, the situation is presumably largely as when the human remains were originally placed here. When you look into the crypts from behind the glass, on the left and right of a narrow `path’ you see heaps of body parts mixed together. Because of the climatic conditions here, some body parts are partly mummified. Many of the remains still have fragments of skin attached to them; sometimes a whole arm, including the fingers, are clearly visible. Bones protrude from soldiers’ boots, there are carcasses still with shreds of uniform on them; if you look carefully — much helped by the use of a torch — you can see the horrors of war in a quite extraordinary way, although the effect had been toned down over the passage of time, the remains collecting dust for the past 150 years.
“The Franco-Prussian War, 1870–1871: Touring the Sedan Campaign”, Maarten Otte, 2020, pp. 146