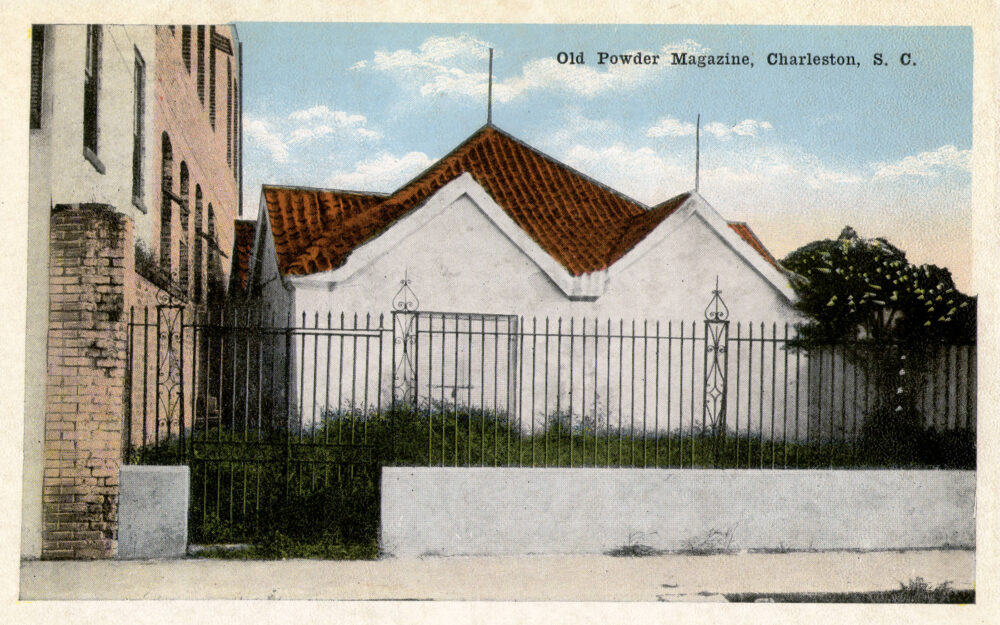 Completed in 1713, The Powder Magazine is South Carolina’s oldest government building. The building was used as an arsenal from 1713-1748 and during the American Revolution in order to defend the city. After 1780, it was retired, and by the early 19th century, it was privately owned. During this period, The Powder Magazine served as a print shop, livery stable, wine cellar, and carriage house. In 1902, The National Society of The Colonial Dames of America in The State of South Carolina purchased the building, saving it from demolition.
The Powder Magazine

In 1703, the Commons House of Assembly authorized construction of a brick magazine or powder house inside Charleston’s fortification wall. This was not done for several years. Public ammunition and powder were still being kept in various bastions along the defensive curtain wall in 1712, when £50 was allotted from the public treasury to build a powder magazine, which was completed in 1713. However, it was not weathertight, and did not keep powder acceptably dry. The roof was eventually reworked, and in 1718, an Act of Assembly stipulated that “no person whatsoever, shall keep in a house in Charles Town, more than one-quarter of a barrel of powder.” From that date, the Powder Magazine became the repository of all government-owned powder, as well as supplies held by merchants for sale.
Preservation Society of Charleston

The Charleston Powder Magazine is located in the historic center of Charleston, on the south side of Cumberland Street, between Church and Meeting Streets. It is a single-story square structured, with stuccoed brick walls 32 inches (81 cm) thick, and an original red tile roof that is pyramidal with intersecting gables. Each wall of the building boasts a large arch. The walls get thinner as they reach the top of the arch, changing from three feet thick, near the ground, to just a few inches thick near the top. There are also few doors in the building, so that in the event of an explosion, most of the explosive force would exit through the roof, with the arches acting like funnels. Sand stored in the roof would then smother and put out the fire.

Construction of the building was authorized by the Province of Carolina in 1703, during Queen Anne’s War, as part of a series of fortifications, but it was not completed until 1713. It was used as a powder magazine until late in the American Revolutionary War, after which it saw a variety of other uses, including as a wine cellar for Gabriel Manigault.
Wikipedia.