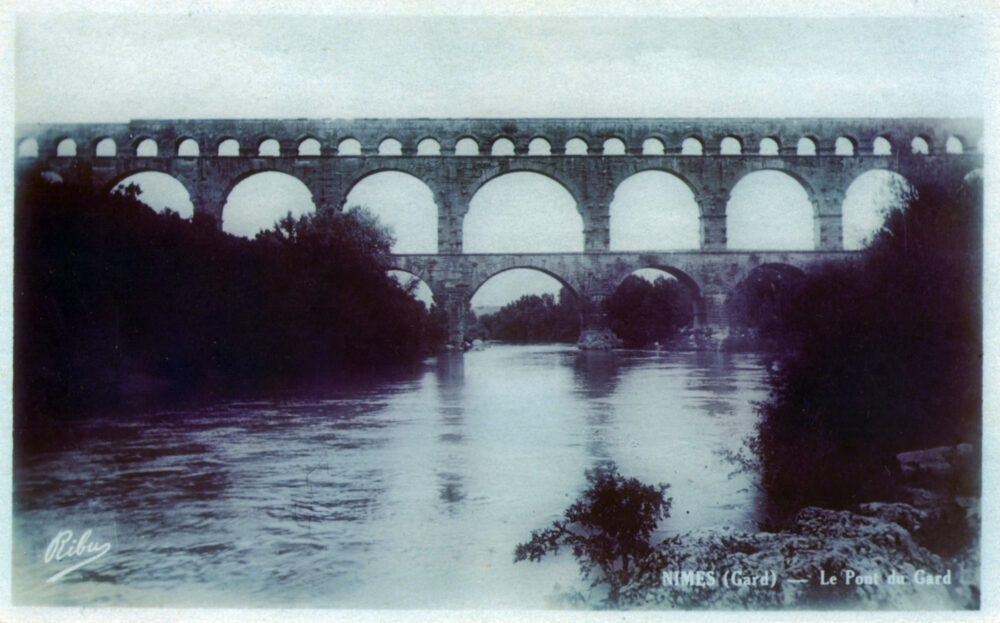 The most visited ancient monument in France, listed a world heritage site by Unesco, the Pont du Gard aqueduct remains one of humankind’s great masterpieces. A marvel of Antiquity and a true technical feat, it is also a stupendous site that has regained its unspoiled state since its refurbishment. 48 metres high, it has three vertical rows of arches: 6 on the lowest level, 11 on the second level and 35 on the third and top level. Its upper part reaches a length of 273 metres (originally 360 metres when there were twelve extra arches). It served as an aqueduct until the 6th century before becoming a tollgate in the Middle Ages and finally a road bridge from the 18th to 20th century.
Avignon & Provence

Nemausus was the capital of the Volcae Arecomici before the Roman conquest. In 118 BC, the area came under Roman influence and the Via Domitia was built. In 42 BC the city received the status of a colony. The city prospered during the Principitate and the early Empire. A building program in the first century produced a six kilometre long city wall, temples, and an amphitheatre. A large spring was present inside the city walls, ornamented with an Augustaeum and Nymphaeum, but this was insufficient to serve the population and the baths. In the second half of the first century, therefore the Eure aqueduct was built. . . . The aqueduct of Nemausus starts at the Eure springs at Uzès. After passing a regulatory basin, it runs first south, then SE in a trench along the foot of the plateau of St-Sifflet. It crosses the steep gully of Bornègre and continues towards Vers, where it crosses two depressions on low bridges. From Vers, the aqueduct turns south where it runs almost continuously suspended over a series of three arcades and a two tier bridge in a broad loop towards the Gardon. It crosses the Gardon on the Pont du Gard, and the rough country of the Forest of Rémoulins along the slopes and over a series of small bridges to a regulatory basin at Rémoulins, the Lafoux reservoir, destroyed at the beginning of the 18th century. It then makes a loop around the depression of St Bonnet, crosses a low pass south of the village and continues SW towards Nemausus, through the two Sernhac quarry tunnels and a 400m long tunnel below the village of Sernhac. It then crosses below the drained lake of Clausonne and runs along the head of the Vistre valley, and along the slope of the hills towards the city, increasingly tortuous when approaching Nemausus. It passed below the town walls by the 400m long tunnel of Croix-de-Fer through a hill to the castellum divisorium in Nîmes.
Roman Aqueducts

The Pont du Gard is an outstanding example of bridges built in ancient times. It achieves a triple performance with its three levels of arches of unequal dimensions and is characterized by the use, for the construction of the arches of the lower levels, of juxtaposed rollers composed of voussoirs bearing engraved positioning marks. In the series of Roman aqueducts, this exceptional edifice is the result of an extensive adaptation to the river regime of the Gardon whose floods are sudden and devastating. The lips installed in front of the piers are designed to resist high water, and the opening of the principal lower arch (24.52 m instead of 21.87 m for the arches of the extremes) facilitates the flow of water.

Built, on the first two levels, of large stone blocks and, at the upper level, of small stone rubble which hold the abutting flagstones of the canal, the Pont du Gard is one of the most revealing monuments as to the construction processes of the early Imperial era. On the dressing of the stone can still be seen the marks of the quarrymen’s and stonecutters’ tools, and sometimes the coding of the stones, with figures and letters, showing their position in the assembly schema.
UNESCO World Heritage listing