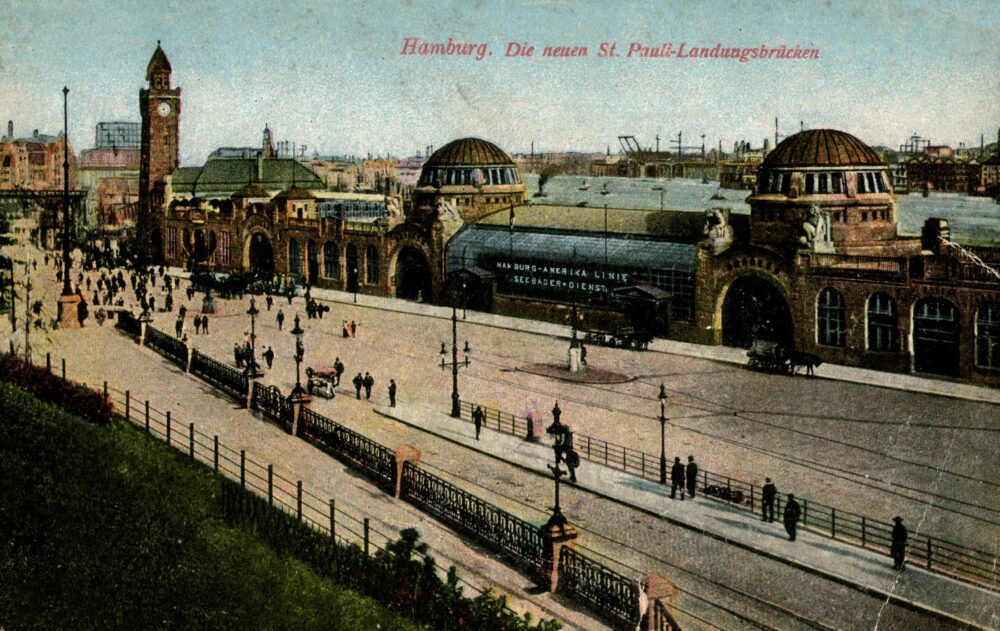 The St. Pauli Piers are the largest landing place in the Port of Hamburg, Germany, and also one of Hamburg’s major tourist attractions. Other English language translations include St. Pauli Landing Stages or St. Pauli Landing Bridges. The piers are located in the St. Pauli area of Hamburg, between the lower harbour and the Fischmarkt (Fish Market), on the banks of the Elbe river. The Landungsbrücken today form a central transportation hub, with S-Bahn, U-Bahn and ferry stations, and are also a major tourist magnet with numerous restaurants and departure points for harbour pleasure boats. There is an entrance to the Old Elbe tunnel at the western end of the Landungsbrücken. The eastern end of the building complex is marked by the Pegelturm (water level tower). Halfway up the tower, there is a water level indicator built into the wall, which indicates the current stage of the tides.
…
The first pier here was built in 1839 at what was then the edge of the harbour. It served as a terminal for steamships, which could be relatively easily filled with coal here. The pier ensured a sufficient security distance from the city, since these ships were fueled by coal which presented a fire risk. The current piers built in 1907 consist of floating pontoons, which are accessible from land by ten movable bridges.
Wikipedia.