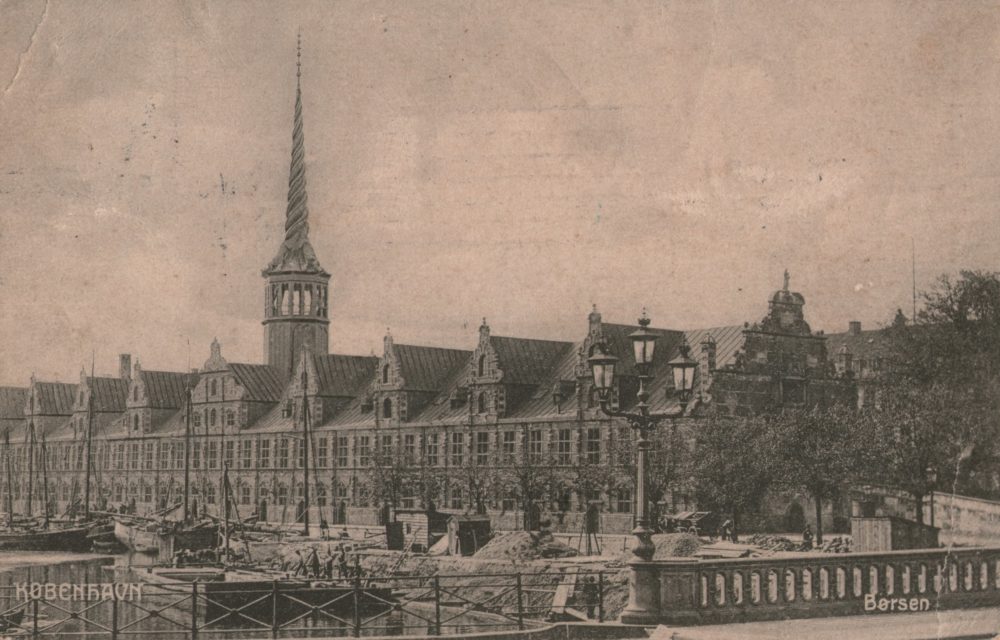 København — Børsen
On back:
Alex Vincent’s Kunsuorlag, Eneberettiget, No. 14
Postmarked 1911

The Old Stock Exchange dates back to 1625 and is one of the oldest buildings in Copenhagen. King Christian IV had realized the importance of increased trade and commerce, and so he had this grand building erected. At the time of its inauguration, the building had room for at least 40 market stalls. The Old Stock Exchange was then surrounded by water from three sides, so ships could unload their cargo directly at the wharf in front.

The Old Stock Exchange was built in Dutch Renaissance style. King Christian IV had originally covered the roof with lead, but during the Swedish occupation of Copenhagen 1658-59, much of this lead was removed to produce cannon balls, and the holes in the roof were only partly covered with tin and tile. Not until the end of the 19th century was the building roofed with copper. The four intertwined dragon tails of the dragon spire are topped by three crowns, symbolizing the Scandinavian empire (Denmark, Norway, and Sweden).
Visit Copenhagen

Børsen is one of the old buildings in Copenhagen and like Rosenborg Slot and Rundetårn, it is one of the buildings of which we remember King Christian IV. The building is built in Dutch renaissance style but is characterized by the King’s taste, like the garrets on the roof and the spire. In 1618 Christian IV asked the engineer Johan Semb to construct a new part of town, Christianshavn, and a dam was made facing Amager on top of which, the first “Amagerbro” (today known as Knippelsbro) was built. Christian IV had realized the importance of trade and business and decided to make Copenhagen the great trade centre and grand city of the future. However, you cannot have a grand city without an exchange and in 1618 the King asked Lorenz van Steenwinckel to start building Børsen, where the dam facing Christianshavn is connected with land on Slotsholmen.
..
Børsen as a market place In the late 16th twenties, Børsen was taken into use by renting out booths for merchants. From the street you could enter the ground floor and visit 40 booths. The whole of Børsen’s first floor contained only one big room with rented booths in the centre and along the windows.
Børsbygningen (More information and photos of rooms)

Børsen was planned by Christian IV as part of his plan to strengthen Copenhagen’s role as a centre for trade and commerce in Northern Europe. A site on the north side of the embankment which connected Copenhagen to the new market town Christianshavn, which was planned on reclaimed land off the coast of Amager. The king charged Lorenz van Steenwinckel with the design of the new building, but Steenwinckel died shortly thereafter. The assignment was then passed on to his brother, Hans van Steenwinckel. The site first had to be prepared since the embankment had not yet stabilized. Construction of the building began in 1620 and was largely completed in 1624 with the exception of the spire (installed in 1625) and details of the east gable (completed in 1640). The building contained 40 trading offices at the ground floor and one large room at the upper floor. The building was in use as a marketplace during the late 1620s.
Wikipedia