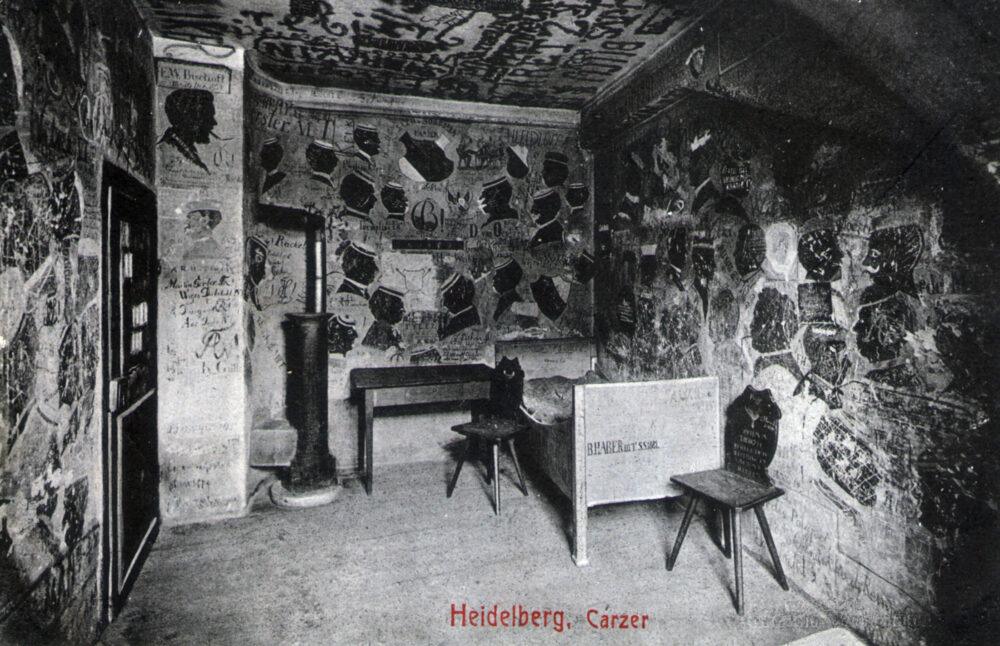 A Karzer was a designated lock-up or detention room to incarcerate students as a punishment, within the jurisdiction of some institutions of learning in Germany and German-language universities abroad. Karzers existed both at universities and at gymnasiums (similar to a grammar school) in Germany until the beginning of the 20th century. Marburg’s last Karzer inmate, for example, was registered as late as 1931. Responsible for the administration of the Karzer was the so-called Pedell (English: bedel), or during later times Karzerwärter (a warden). While Karzer arrest was originally a severe punishment, the respect for this punishment diminished with time, particularly in the 19th century, as it became a matter of honour to have been incarcerated at least once during one’s time at university. At the end of the 19th century, as the students in the cell became responsible for their own food and drink and the receiving of visitors became permitted, the “punishment” would often turn into a social occasion with excessive consumption of alcohol.
Wikipedia.

Established in the 1600s as a means of allowing students to police other students, the karzers were simple rooms where young academics would be sent for minor offenses such as drunken conduct, insulting authorities or staging a duel. The accused would be forced to lodge in the jail for anywhere from a few days to a few weeks, but was still allowed to attend classes and other primary academic functions. Over the years, being thrown into the karzer became a sort of rite of passage for the students, who would actively seek punishment. Eventually visitors were allowed and the jails devolved into party palaces, where the locked-up students would invite people over to celebrate their incarceration, marking the walls with graffiti, often from their respective fraternity houses.

No longer in use, the Heidelberg karzer has been preserved in its original state, including iron frame beds and wooden tables decorated by the etched writings of former students. The walls too have been left perfectly alone, still covered in the centuries-old scrawl of proud delinquents.
Atlas Obscura

(Via Google Translate)
The institution of student detention in Heidelberg dates back to the 14th century, the time when the university was founded, when it still had its own jurisdiction over students. With the establishment of a student prison in the 16th century , imprisonment became common. In Heidelberg, these legal relationships lasted until the beginning of the 20th century.

The colorful murals only date from the last decades of the use of the prison. At that time, serving out the prison sentence in the prison for students was just fun , which made them proud to have been imprisoned here, to have immortalized themselves on the walls with their names and likeness and the badges of their respective student fraternity. At that time, which was strongly influenced by student fraternities, it was customary to arrest the imprisoned students separately according to the type of fraternity ( corps , fraternity , country association, etc.). Otherwise, students from different fraternities could start quarrels among themselves, which could have led to tumultuous conditions during incarceration.
Wikipedia. 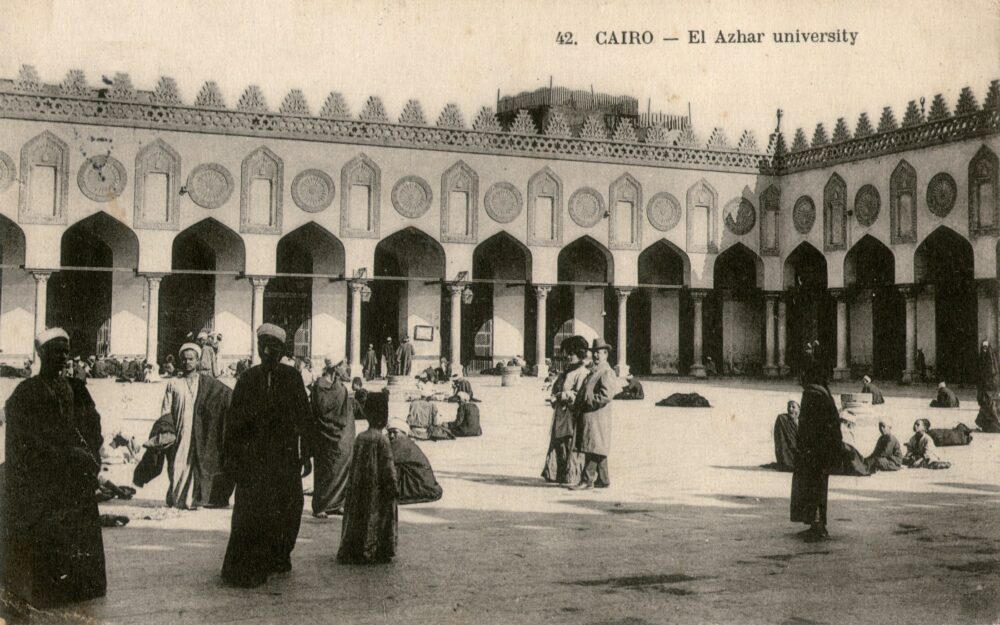 Al-Azhar University is a university in Cairo, Egypt. Associated with Al-Azhar Mosque in Islamic Cairo, it is Egypt’s oldest degree-granting university and is renowned as the most prestigious university for Sunni Islamic learning.
Wikipedia.

Al-Azhar began as a mosque built in 970 AD during the Fatmid era, and became a Sunni institution after the conquest by Saladin in 1171. With the abolition of the caliphate and the office of Shaykh al-Islam (seyhul Islam) in Istanbul in 1924, al-Azhar became the paramount Islamic institution. There is no clear consensus as to when al-Azhar became a centre of learning. Al-Azhar is inclusive of the four major Sunni schools of law, the Ashari and Maturidi schools of theology, and seven major Sufi orders. Al-Azhar has been through several stages of reform: in the nineteenth century it was transformed from madrasa to university, with the Azhar Organisation Laws of 1896 and 1911 creating a centralised bureaucracy that allowed the institution’s head, the Grand Sheikh, to oversee its general administration.
University of Oxford: Changing Structures of Islamic Authority 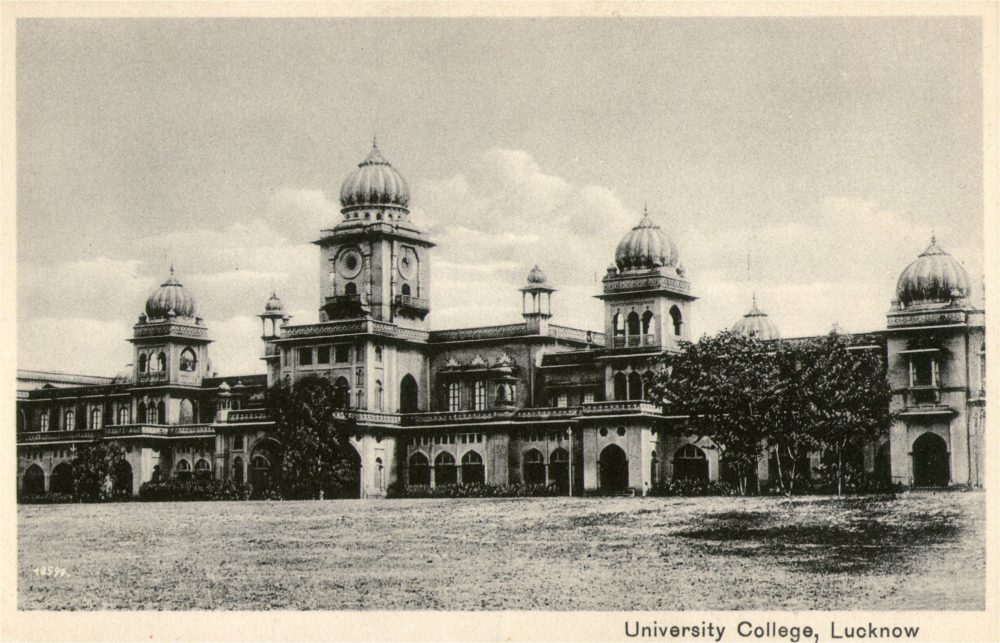 For well over 30 years the Canning College remained in the Kaisar Bagh building, but this site was not suitable for the development of a big residential institution. The provincial Government was prevailed upon to come to its assistance and it readily consented to purchase the college building for a sum of Rs. 2,10,000/- to house the Provincial Museum. In 1905 the Government handed over to the college the extensive walled garden of about 90 acres on the north of the river Gomti, popularly known as “Badshah Bagh”, originally a garden house of King Nasir-ud-Din Haidar, and, since the pacification of Avadh, the Lucknow residence of the Maharaja of Kapurthala. Of the old royal building of this garden, only the Lal Baradari, one lofty and handsome gate and one canal are still present today.

After another financial aid by Maharaja Sir Bhagwati Singh of Balrampur, the implementation of a new building started taking shape. The plans of the building were entrusted to the well-known architect. Sir Swinton Jacob, who prepared an impressive design in the Indo-Saracenic style. The plans of the building were considered by the experts to be so distinctive and elegant that they were subsequently sent for demonstration at the Exhibition held in London on the occasion of the Festival of Empire in 1911.
Wikipedia. 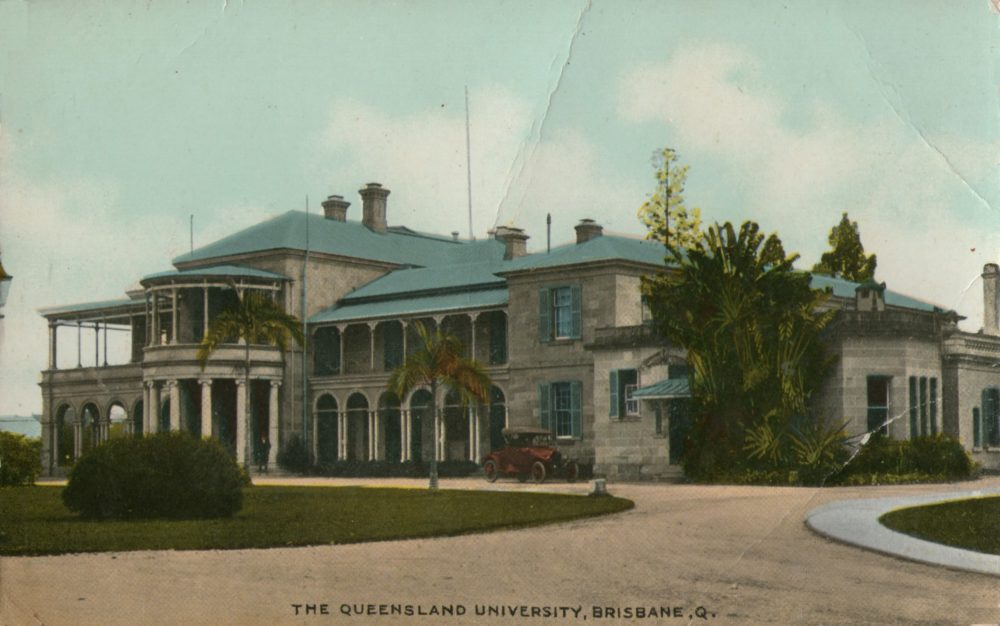