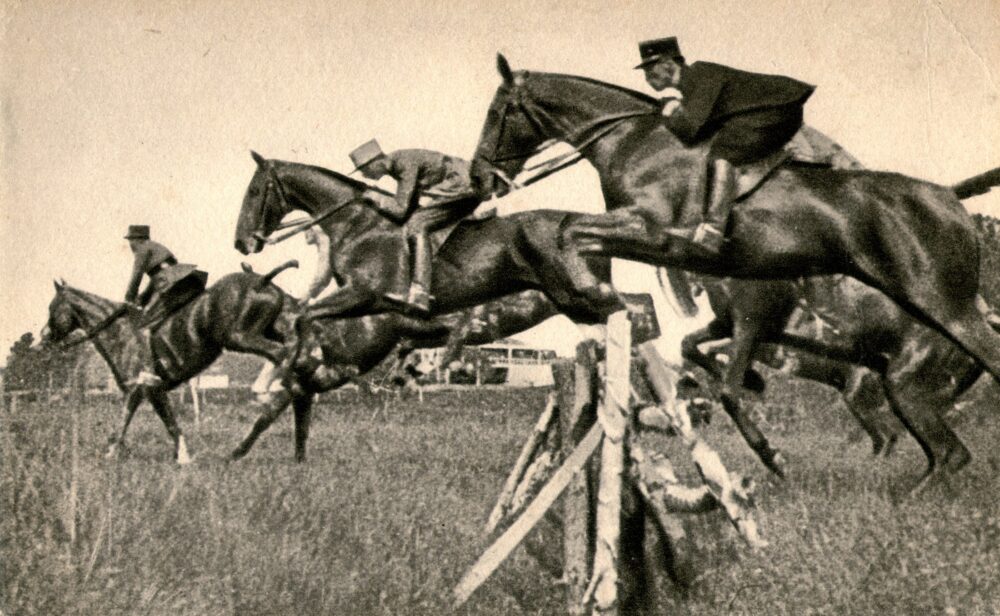 In 1763, Louis XV (via the Duc de Choiseul) reorganised the French cavalry. A new school for officers from all the cavalry regiments was set up at Saumur, managed and supervised by the “Corps Royal des Carabiniers” – since its inception the school has been hosted in the carabinier regiment’s quarter of the town, latterly in a magnificent 18th century building. This functioned until 1788. At the end of 1814, after the First Restoration, Louis XVIII set up the “École d’Instruction des Troupes à cheval” in Saumur. Its activities declined from 1822 onwards so it was regenerated by Charles X under the name of the “École Royale de Cavalerie” (later renamed the École impériale de cavalerie de Saumur). Most of its building complex was taken up with a military riding area and a riding-academy training hall. From 1830, with the disappearance of the École de Versailles, Saumur became the capital and sole repository of the French equestrian tradition, and its knowledge (such as in the Cadre Noir and its training regime in dressage) is still recognised throughout the world. At the end of the Second World War the French mounted cavalry (reduced to several squadrons of spahis retained for patrol work by this point) and armoured troops merged to form the ‘Arme blindée et cavalerie’ (ABC), with the École de Saumur becoming the new branch’s training centre.
Wikipedia.

If the wars of the Revolution and the Empire confirmed the legendary bravery of the French cavalry, they also revealed a lack of equestrian training. The troops were destroyed by contagious illness, the ferocity of combat, and the poor quality of the military equitation of the time. The French cavalry was decimated after the Napoleonic wars. In 1815 a Cavalry school was created in Saumur to reform the mounted troops and to standardize the use of the horse in war. Faced with the urgency of retraining riders and horses, a body of instructors was set up, made up of several great civilian riding masters, out of the Manèges of Versailles, the Tuileries and Saint-Germain. Considered the elite of the period, they trained the officer pupils of the cavalry : In 1825, it was the birth of the Cadre Noir of Saumur.

However at the beginning of the XXth century when the cavalry became mechanized (tanks and planes having gradually replaced horses on the battlefield) the question was raised of the usefulness of the Cadre Noir at the heart of the army. The government of the time could not bring itself to eliminate something which had become a real living heritage for France with the passage of time. A spectacular increase in riding for pleasure in the 70’s saw the creation of innumerable equestrian centres. The creation of the National Riding School was aimed at organizing the teaching of riding in France; its vocation to prepare for high level teaching diplomas and top level competition.. The National Riding School was created by decree in 1972 under the charge of the Minister for Sport.
Le Cadre noir de Saumur