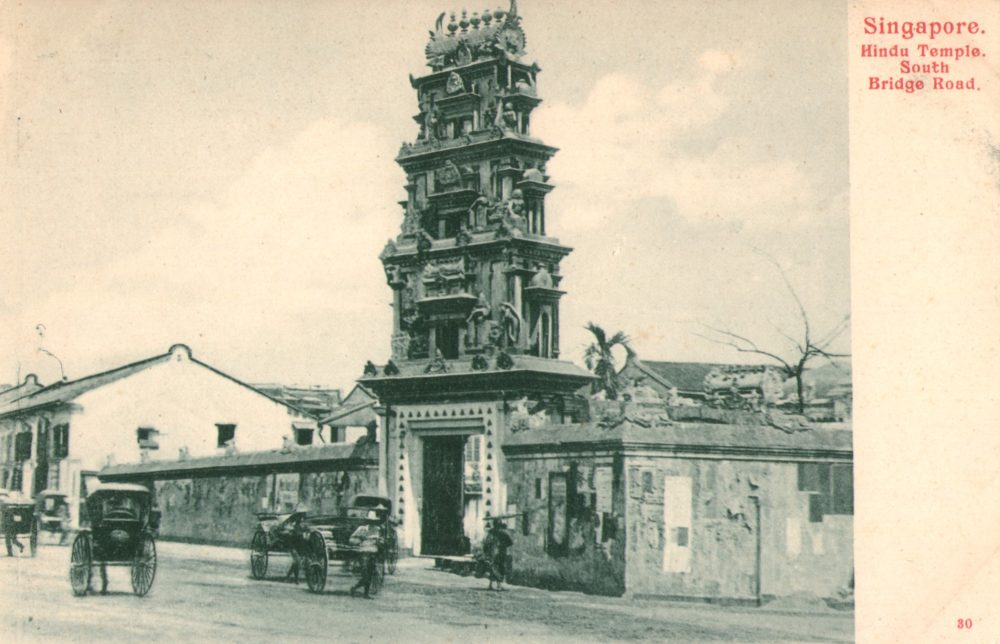 The Sri Mariamman Temple is Singapore’s oldest Hindu temple. It is an agamic temple, built in the Dravidian style. Located at 244 South Bridge Road, in the downtown Chinatown district, the temple serves the majority Hindu Singaporeans, Tamilians, in the city-state. . . . By 1827, Naraina Pillai had built a simple temple made of wood and attap. In the same year, he installed Sinna Amman, a small representation of the goddess Mariamman, in the temple. Mariamman is a rural South Indian mother goddess who is especially worshipped for protection against diseases. According to the Hindu Endowments Board, the current managers of the temple, the existing deity in the principal shrine of the temple is the original installed by Pillai in 1827. As is the common practice, the temple is named after its principal deity. The temple was also known to devotees over the years as the Sithi Vinayagar and Gothanda Ramaswamy Mariamman Temple or, more simply, Mariamman Kovil (kovil being the Tamil word for temple). . . . The original three-tiered gopuram (entrance tower) was constructed in 1903. It was slimmer and less richly embellished than the current tower. The sides of the tower also appeared to be more stepped than sloping. Nonetheless, it had an iconic presence in Chinatown, and was a widely recognised landmark. The present six-tiered gopuram was built in 1925. It was repaired and restored with an elaborate proliferation of sculptures in the 1960s.
Wikipedia.

It’s the oldest Hindu temple in Singapore, dating back to 1827.
The old foundations of the present-day edifice were built in 1843.
The temple was built for use by immigrants from South India.
The temple is dedicated to the goddess Mariamman, known for curing illnesses and diseases.
Chinatownology

Sri Mariammam Hindu temple is almost as old as Singapore itself. In 1827 the clerk Naraina Pillay, who came in the same ship as Stamford Raffles years earlier, erected a wood and atap hut on this site. Later in 1843 the present temple was constructed and dedicated to the goddess Mariamman who is worshipped for her power to cure disease (early Singapore was mostly jungle, so disease was rampant). The temple is built in the south Indian Dravidian style similar to Sri Meenakshi in Madurai, India.
Asian Historical Architecture (includes plan)