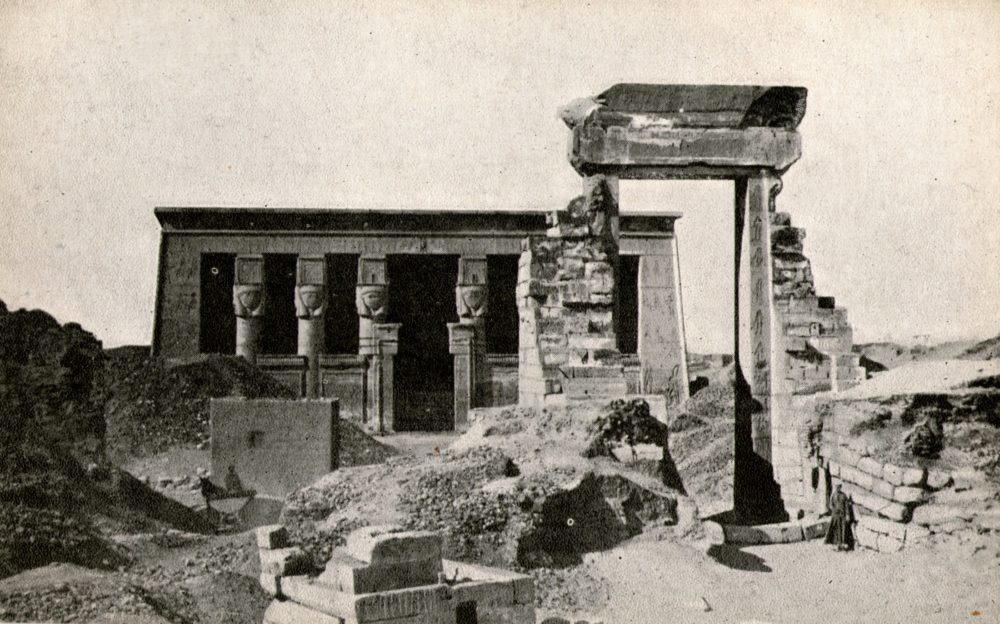 (on back)
Dendera. Temple of the Goddess Hather.
Published: Gaddis & Seif, Luxor

Dendera Temple complex is located about 2.5 kilometres (1.6 mi) south-east of Dendera, Egypt. It is one of the best-preserved temple complexes in Egypt. . . . he dominant building in the complex is the Temple of Hathor. The temple has been modified on the same site starting as far back as the Middle Kingdom, and continuing right up until the time of the Roman emperor Trajan. The existing structure began construction in the late Ptolemaic period, and the hypostyle hall was built in the Roman period under Tiberius.
Wikipedia

Hathor was a major goddess in the ancient Egyptian pantheon , who personified the principles of joy, feminine love, and motherhood, and her cult center was at Dendera, one of the best-preserved temple complexes in all of Egypt. The Temple of Hathor is the largest and most impressive buildings in this religious complex, and is visually stunning with its grand entrance, detailed carvings, hieroglyphs, and decorated ceilings.
The Magnificent Temple of Hathor, Goddess of Love: Best Preserved Temple in all of Egypt

The Temple of Hathor is one of the most well-preserved temples in all of Egypt. There are three temples to view in the complex: the birthing temple at the front, the temple of Isis behind the main temple, and the main temple dedicated to Hathor. There is also a sacred pool that you can still explore.
Atlas Obscura

Enclosed within the precincts of the Dendera complex are a sacred lake, a temple of the goddess Isis, and a brick sanatorium where divine healing was practiced. There is also an early Christian church that typifies the situation in so many Egyptian temples, whose sacred precincts were usurped by the Christians. Within the main temple it is interesting to study the beautiful and highly detailed astrological calendars carved and painted upon the ceilings. Visitors may wonder about the blackened condition of other ceilings in the temple. When Napolean’s scholars first visited Dendera they found a centuries-old Arab village firmly established inside the great temple; the villagers’ cooking fires had blackened the ceilings over the years.
Dendera, Egypt : Temple of the Goddess Hathor 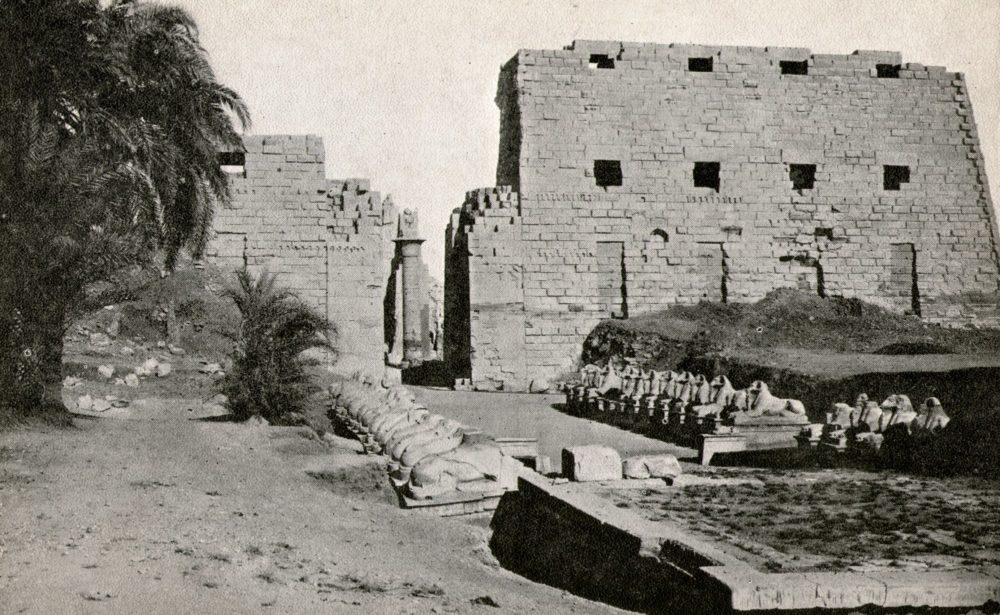 (on back)
Karnak. Entrance and sphinxes of the Great Temple of Amen-Ra
Published: Gaddis & Seif, Luxor, c.1930

The Karnak temple complex at Luxor developed over more than 1,000 years, principally between the Twelfth and Twentieth Dynasties. It was, at its peak, the largest and most important religious complex in ancient Egypt. The most significant structure, and the largest religious building ever built, is the Temple of Amun-Ra, considered to be where that god lived on earth with his wife, Mut, and son, Khonsu, who also have temples at the site.
World Monuments Fund: Karnak Temple 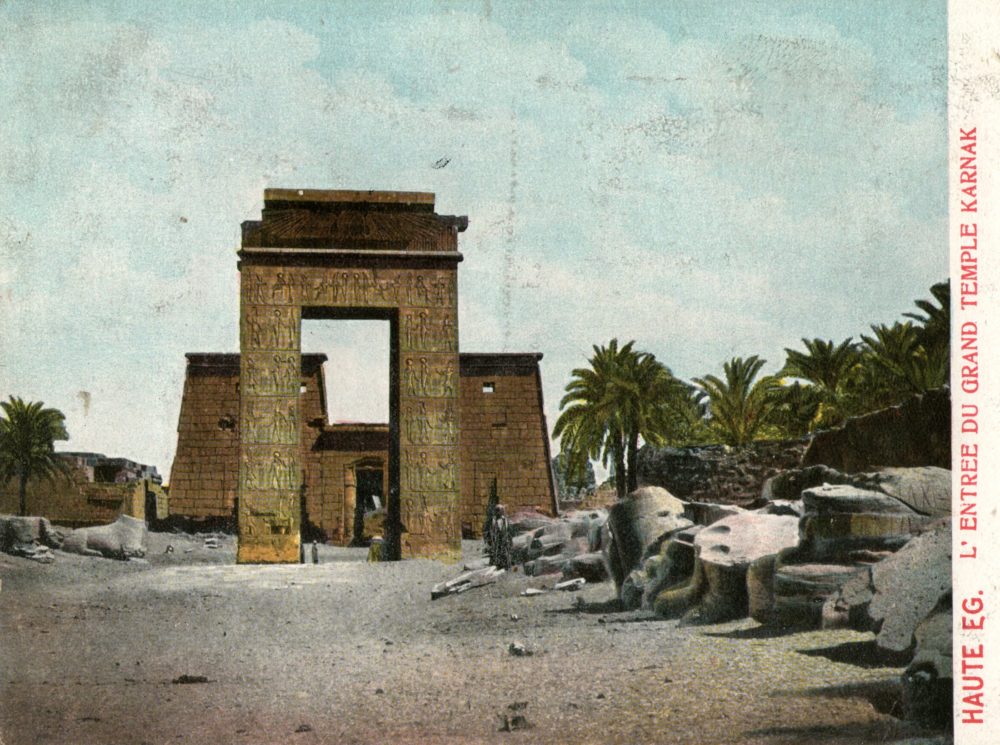 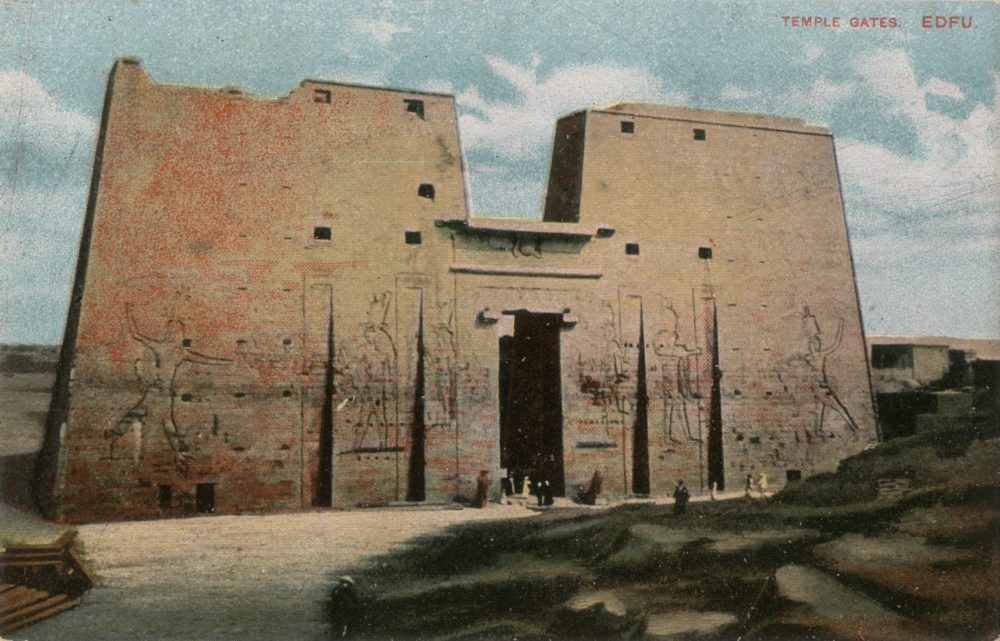 This Ptolemaic temple, built between 237 and 57 BC, is one of the best-preserved ancient monuments in Egypt. Preserved by desert sand, which filled the place after the pagan cult was banned, the temple is dedicated to Horus, the avenging son of Isis and Osiris. With its roof intact, it is also one of the most atmospheric of ancient buildings.

Edfu was a settlement and cemetery site from around 3000 BC onward. It was the ‘home’ and cult centre of the falcon god Horus of Behdet (the ancient name for Edfu), although the Temple of Horus as it exists today is Ptolemaic. Started by Ptolemy III (246–221 BC) on 23 August 237 BC, on the site of an earlier and smaller New Kingdom structure, the sandstone temple was completed some 180 years later by Ptolemy XII Neos Dionysos, Cleopatra VII’s father. In conception and design it follows the general plan, scale, ornamentation and traditions of Pharaonic architecture, right down to the Egyptian attire worn by Greek pharaohs depicted in the temple’s reliefs. Although it is much newer than cult temples at Luxor or Abydos, its excellent state of preservation helps to fill in many historical gaps; it is, in effect, a 2000-year-old example of an architectural style that was already archaic during Ptolemaic times.
Lonely Planet