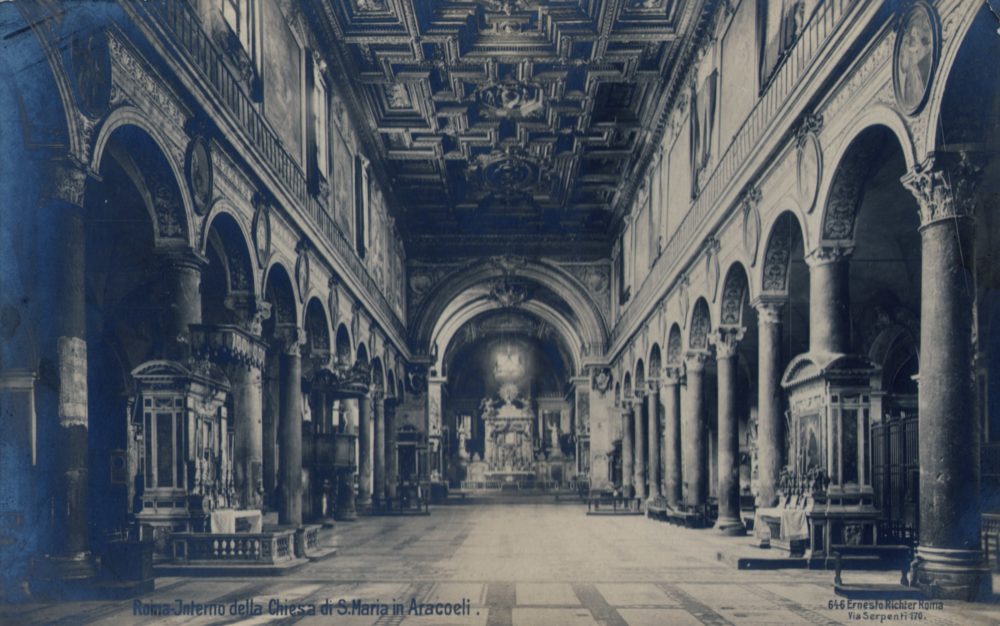 The Basilica of St. Mary of the Altar of Heaven (Latin: Basilica Sanctae Mariae de Ara coeli in Capitolio, Italian: Basilica di Santa Maria in Ara coeli al Campidoglio) is a titular basilica in Rome, located on the highest summit of the Campidoglio. It is still the designated Church of the city council of Rome, which uses the ancient title of Senatus Populusque Romanus. . . . Many buildings were built around the first church; in the upper part they gave rise to a cloister, while on the slopes of the hill a little quarter and a market grew up. Remains of these buildings–such as the little church of San Biagio de Mercato and the underlying “Insula Romana”) were discovered in the 1930s. At first the church followed the Greek rite, a sign of the power of the Byzantine exarch. Taken over by the papacy by the 9th century, the church was given first to the Benedictines, then, by papal bull to the Franciscans in 1249–1250; under the Franciscans it received its Romanesque-Gothic aspect. The arches that divide the nave from the aisles are supported on columns, no two precisely alike, scavenged from Roman ruins.
. . .
The original unfinished façade has lost the mosaics and subsequent frescoes that originally decorated it, save a mosaic in the tympanum of the main door, one of three doors that are later additions. The Gothic window is the main detail that tourists can see from the bottom of the stairs, but it is the sole truly Gothic detail of the church. The church is built as a nave and two aisles that are divided by Roman columns, all different, taken from diverse antique monuments. Among its numerous treasures are Pinturicchio’s 15th-century frescoes depicting the life of Saint Bernardino of Siena in the Bufalini Chapel, the first chapel on the right. Other features are the wooden ceiling, the inlaid cosmatesque floor, a Transfiguration painted on wood by Girolamo Siciolante da Sermoneta, and works by other artists like Pietro Cavallini (of his frescoes only one survives), Benozzo Gozzoli and Giulio Romano.
Wikipedia.

Located south of the Capitoline Hill, Santa Maria in Aracoeli was built during the sixth century on the site of an ancient Byzantine abbey. During the ninth century the church was given to the Benedictines, and a few centuries later, was given to the Franciscans. These restored the church giving it a more Gothic aspect. In 1797, during the Republic, the church was deconsecrated and transformed into a stable. Nowadays, the basilica has been fully reconstructed and is one of the most visited in Rome.

Millions of tourists and locals visit the church to see the Santo Bambino of Aracoeli, a wooden image of the Christ Child, who is believed to resurrect the dead. The statue, made out of olive wood during the fifteenth century, was stolen in 1994 and was never recovered. A replica was made to substitute it. The temple has 22 columns, none exactly alike, which were taken from Roman ruins. It is also worth seeing various burials and frescoes from the fifteenth century. The wooden ceiling is decorated with paintings representing the Battle of Lepanto, where the Holy League defeated the fleet of the Ottoman Empire.
Civitatis Rome 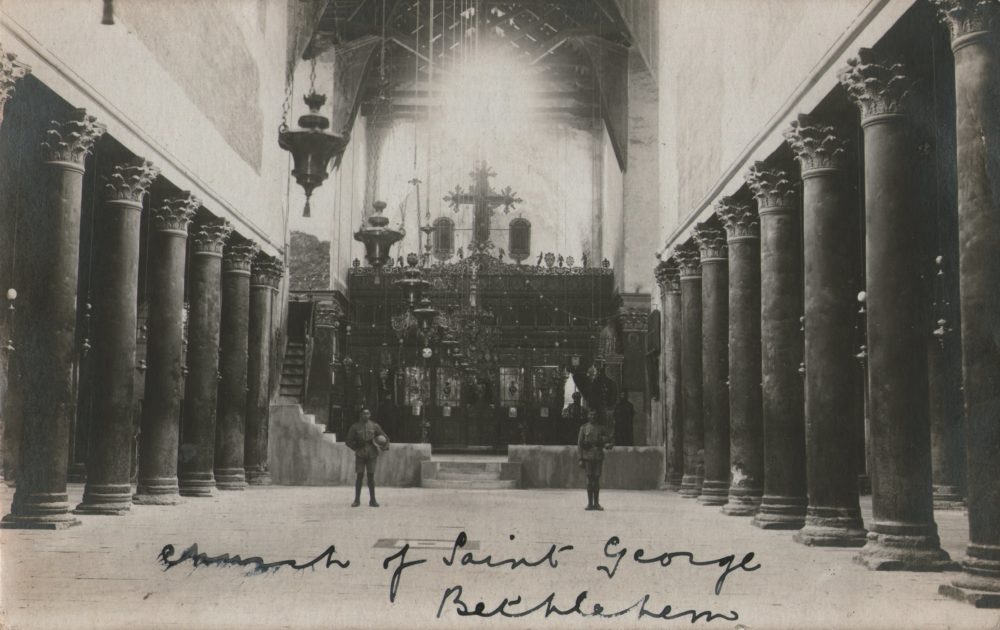 No date clues on the card, but this website has the same images, so most likely 1910s.

Feuding monks at the Church of the Nativity in Bethlehem don’t just cast the first stone—they stockpile rocks in anticipation of future altercations. Several holy men landed in the hospital two Christmases ago after a fight broke out over the dusting of church chandeliers. The occasional brawls at the 1,700-year-old basilica, believed to mark the birthplace of Jesus Christ, reflect the difficulty of housing three Christian denominations under a single roof.

And now that roof is rotting, threatening the structural integrity of the building. Parts of the wooden truss structure date to the 15th century, and holes in the timbers allow dirty water to drip upon the precious paintings and mosaics below. The problem has been worsening for decades, but the resident clerics—from the Greek Orthodox and Armenian Orthodox churches and the Franciscan order of the Roman Catholic Church—are jealous of each other’s claims of custody and have been unable to agree on a plan of action.
Endangered Site: Church of the Nativity, Bethlehem (Smithsonian Magazine)

The present Church of the Nativity is one of the earliest Christian structures. The original Basilica, erected in the 4th century by Emperor Constantine, was completely destroyed in the Samaritan Revolt of 529 A.D. It was replaced during the reign of Justinian (527-65) on the same site, by a larger Basilica, slightly different in plan and incorporating different parts of the original building. Evidence of the turbulent history of the church can be readily seen in the fabric of the building; for centuries it was one of the most fought-over of the Holy Places. It was only by chance that this building escaped destruction during the Persian invasion of A.D. 614. It was the only major church in the country to be spared. Later, the building was seized and defended by a succession of Moslem and Crusader armies; this explains the fortress-like appearance of the church’s exterior. This is also a common feature of most of the ancient religious buildings in the Holy Land. In the course of time, the complex was expanded by the addition of several chapels and monasteries belonging to different Christian Churches.
Church of the Nativity: History & Structure:

Sanctuary Bethlehem has virtual tour (I’d recommend using the on screen controls rather than the mouse), 3D models and a lot of information about various rooms, buildings, caves etc. (under Visit menu) 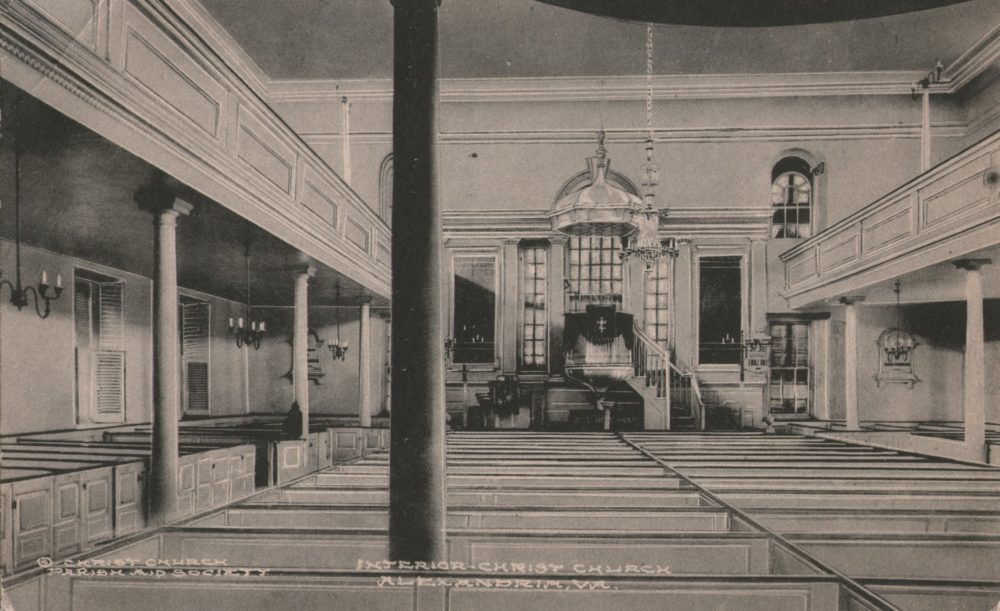 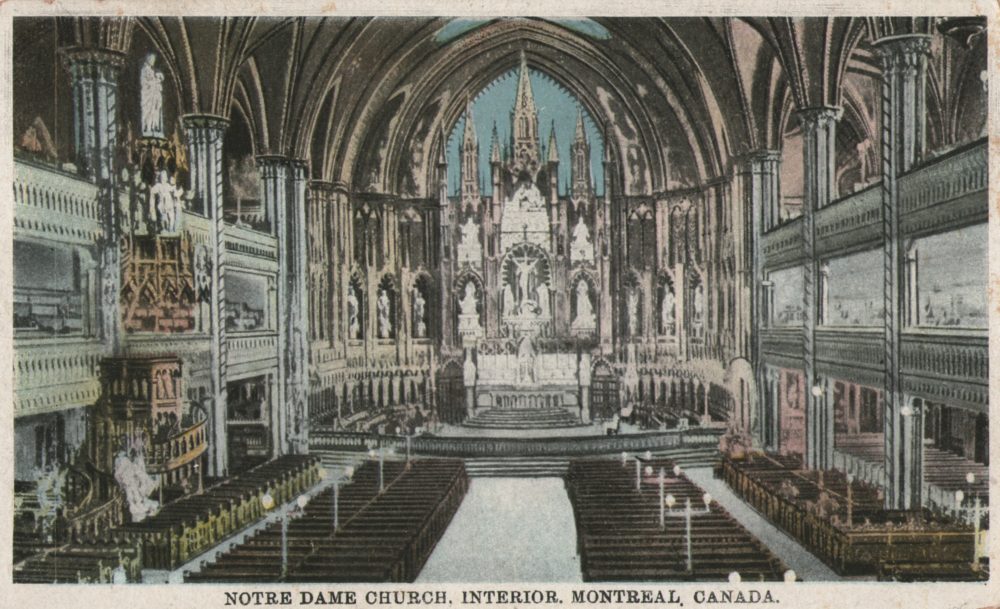 Old St. John’s Church Interior, Richmond, Va.
In 1775 a convention was held in this historic church to deliberate upon the oppressive measures adopted by the British Government for enforcing the collection of taxes levied upon the Colonies. Many members of the convention hesitated to commit Virginia to any act of resistance, but Patrick Henry though only 39 years old, flashed the electric spark which exploded with fiery eloquence, “Is life so dear, or peace so sweet, as to be purchased at the price of the chains of slavery? Forbid it Almighty God I know not what course others may take, but as for me, give me liberty or give me death.”

During the delivery of this immortal speech Henry stood in pew 72, now marked by white tablet shown in this view.