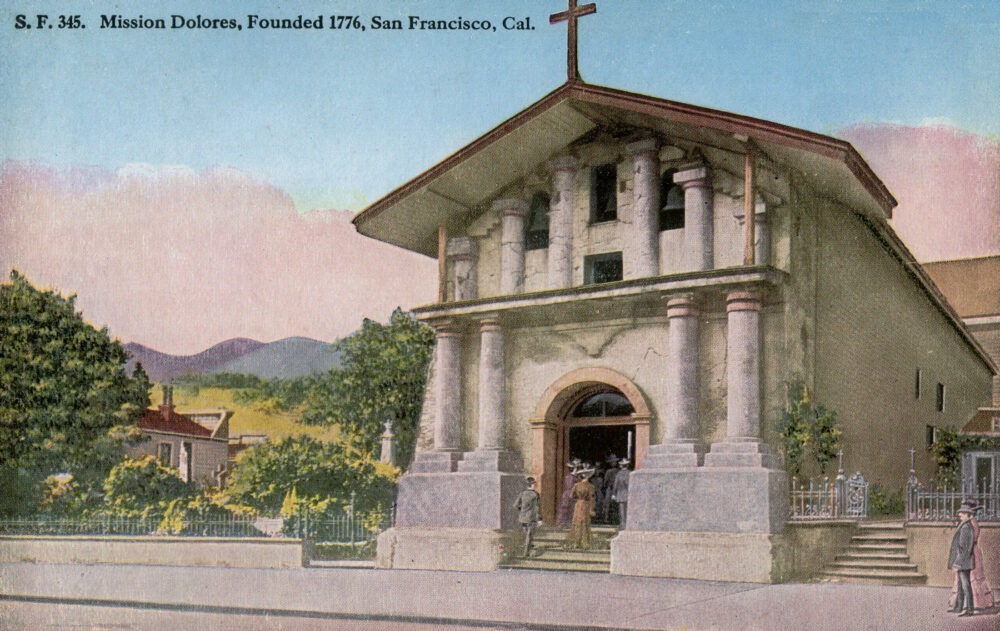 Mission Dolores, Founded 1776, San Francisco, Cal.
On the back:
SAN FRANCISCO DE ASIS (Dolores)
San Francisco de Asis (Dolores), the sixth Mission established was founded October 8, 1776. This Mission gave the name to the metropolis of California and was named in honour of the patron of the Fanciscan Fathers. The old adobe, tile roofed, structure is still in a fine state of preservation, andwhile less architecturally pretentions, is a most interesting link between the present and the past. At its side in the old cemtery rests the body of Luis Antonio Argüello, the first Mexican governor of California, and within the walls of the church is buried José Francisco Ortega, the discovered of the Golden Gate.
1910s
Publisher: Pacific Novelty Co, San Francisco.

The Misión San Francisco de Asís was founded October 9, 1776. The settlement was named for St. Francis of Assisi, the founder of the Franciscan Order, but was also commonly known as “Mission Dolores” owing to the presence of a nearby creek named Arroyo de los Dolores, or “Creek of Sorrows.” Mission Dolores is the oldest intact building in the City of San Francisco and the only intact Mission Chapel in the chain of 21 established under the direction of Father Serra. The Mission has been a steadfast witness to the span of San Francisco’s history including the California Gold Rush and the 1906 San Francisco Earthquake. The Mission Cemetery is the only cemetery that remains within the City limits. The Cemetery is the final resting place for numerous Ohlone, Miwok, and other First Californians as well as notable California pioneers.
Mission Dolores Parish

The present Mission church, near what is now the intersection of Dolores and 16th Streets, was dedicated in 1791. At the time of dedication, a mural painted by native labor adorned the focal wall of the chapel. The Mission was constructed of adobe and was part of a complex of buildings used for housing, agricultural, and manufacturing enterprises (see architecture of the California missions). Though most of the Mission complex, including the quadrangle and Convento, has either been altered or demolished outright during the intervening years, the façade of the Mission chapel has remained relatively unchanged since its construction in 1782–1791.
Wikipedia.

Sainte-Dévote Chapel is a Roman Catholic chapel dedicated to Saint Devota, the patron saint of Monaco. The chapel was first mentioned in archived documents dated 1070, built against the wall of Vallon des Gaumates, on the space now occupied by the Chapel of Relics. It was restored in the 16th century. In 1606, Prince Honoré II added a span, followed by a porch in 1637. The façade was rebuilt in 1870 and refurbished further in 1891 in “18th-century Neo-Greek” style. The stained-glass windows were made by Nicolas Lorin of Chartres. The glass windows were destroyed during the bombing of Monaco during World War II and were restored by Fassi Cadet of Nice in 1948. The chapel became the parish church in 1887.
Wikipedia.

The current Sainte-Dévote Church is located in the Valley of the Gaumates, in approximately the same place (according to legend) as where the boat with the martyred body of the Saint was beached and where her cadavre was buried. The first chapel which was consecrated to Devota was located on the same site as the ancient temple dedicated to Hercules and was probably built directly over this temple, in order to promote the spread of Christianity.
Government of Monaco website

In the very early 4th century, in Corsica (which was a Roman province at that time) the Roman governor, Diocletian, ordered the great persecution of the Christians. A young Christian, Devote, was arrested, imprisoned and tortured. She died without denying her faith. After her death, the governor of the province ordered for her body to be burnt, but the Christians saved her body and placed it on a boat bound for Africa, where they believed she would receive a proper Christian burial. Right from the first hours of the crossing, a storm overtook the boat. Then, a dove flew out from Devote?s mouth and without incident guided the boat to Monaco where it ran aground in the Gaumates (site of the present-day Saint Devote church).
[continued]
Sainte Devote 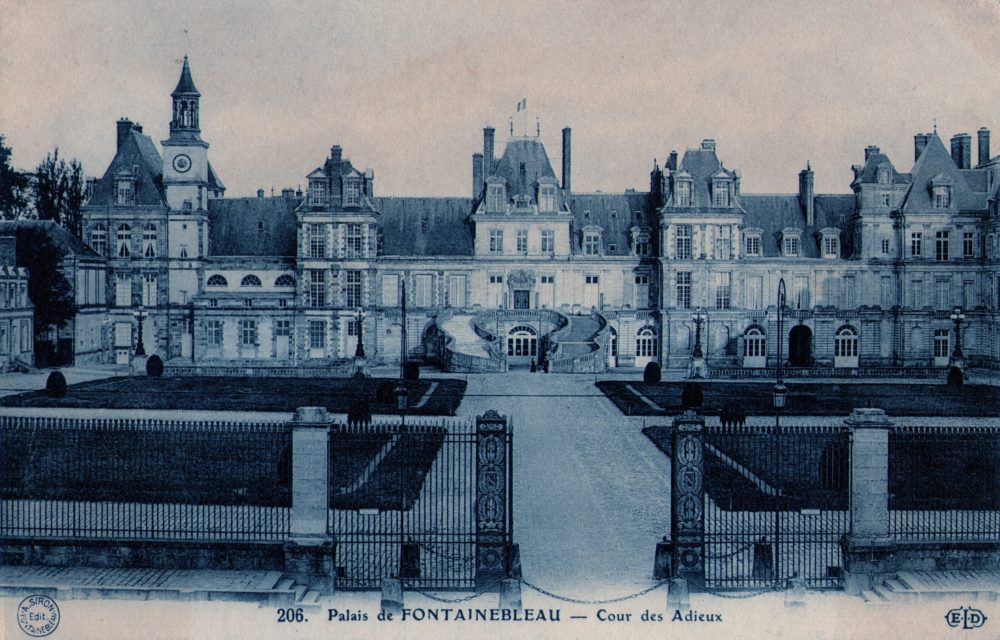 Used by the kings of France from the 12th century, the hunting lodge of Fontainebleau, standing in the heart of the vast forest of the Ile-de-France in the Seine-et-Marne region, was transformed, enlarged and embellished in the 16th century by King François I, who wanted to make it a “new Rome”. Surrounded by an immense park, the palace, to which notable Italian artists contributed, combines Renaissance and French artistic traditions. The need to expand and decorate this immense palace created the conditions for the survival of a true artistic centre.

The construction of the palace began in 1528. The modifications undertaken later by François I’s successors and carried out on different scales until the 19th century have left their imprint on the physionomy of the present complex, which today comprises five courtyards placed in an irregular manner and surrounded by an ensemble of buildings and gardens.
UNESCO World Heritage listing 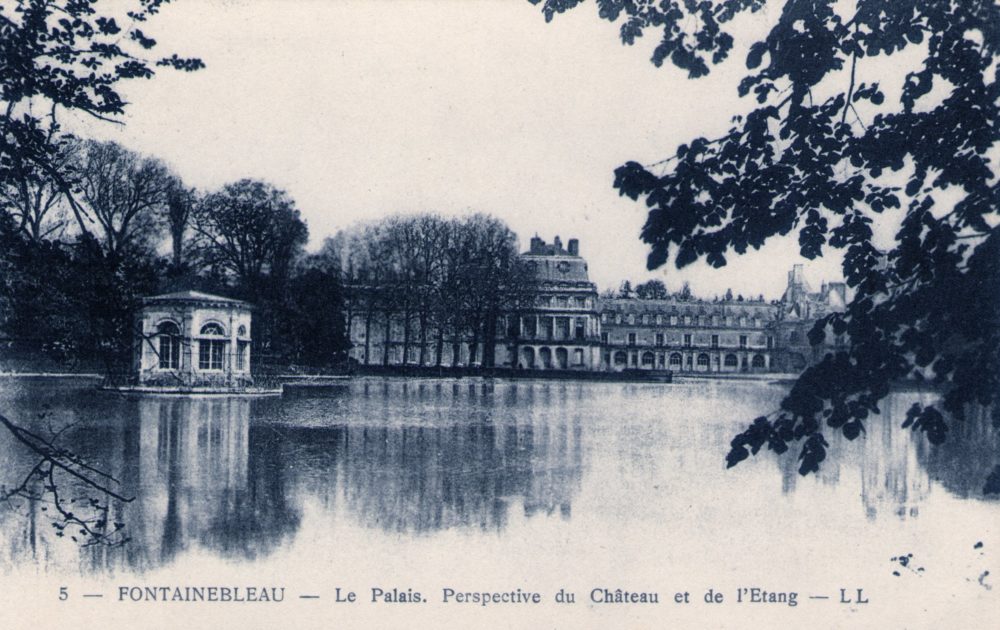 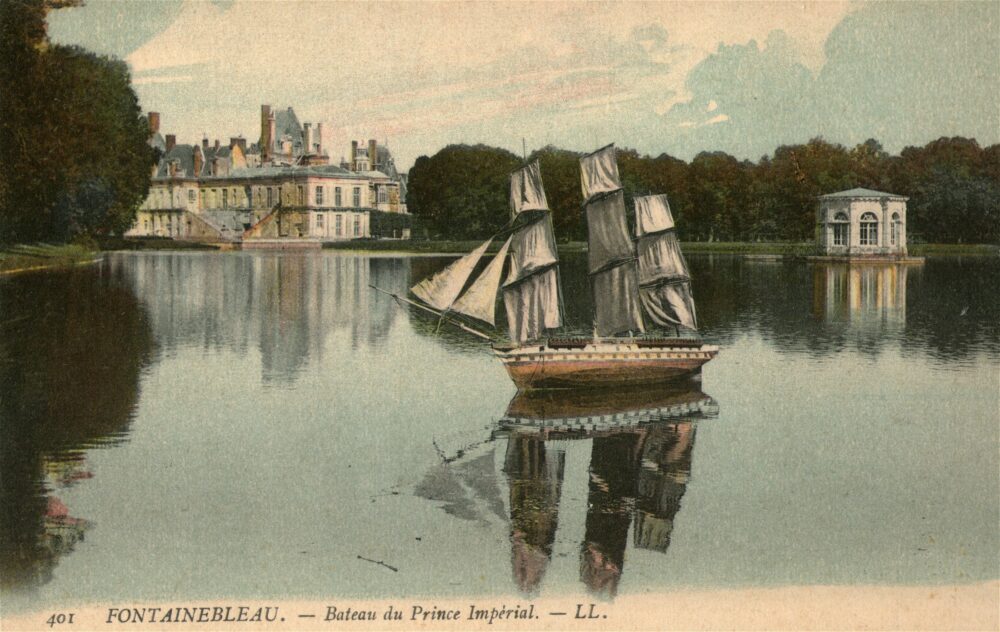 As the only child of Napoleon III and Empress Eugenie, Napoleon Eugène Louis Jean Joseph, the Imperial Prince, was particularly spoilt. The Emperor, who wanted to teach him the basics of navigation, ordered a frigate for him. Built by the Brest Arsenal’s workshops, it was given to the young prince in 1863, for his seventh birthday.
Chateau de Fontainebleua

A year earlier in 1863 Napoleon III almost certainly commissioned the small frigate that was given to his son, Napoleon Eugene Louis Giuseppe Bonaparte, the Imperial Prince (1856-1879.) Built at the arsenal at Brest, the boat was a present to the boy for his seventh birthday. 3.90 M long, with a beam of 1.10 M and 6 M high, the boat was a miniature reproduction of a XIX century ship. Its two bridges had 100 toy cannon along its sides, a helms wheel, an anchor, a bowsprit that was almost two metres long and complex rigging. The boat could be rowed by two or three people seated on benches below. Napoleon II and the Capatin Duperré used the boat to give the Imperial Prince his first lessons on navigation. Up to 1870 the fleet was just for the pleasure of the Royal Court. After the Prussians invaded, the fleet was transported to Saint-Cloud where it was unfortunately completely destroyed. The only boats left at Fontainebleau were Eugenia’s gondola and the Prince’s frigate. The gondola was sold in 1907 and the frigate was abandoned on the Pond for years until it was brought into the castle for restoration in 1926 under the direction of the architect Jean-Paul Alaux.
Save the Imperial Prince’s frigate! (pdf) 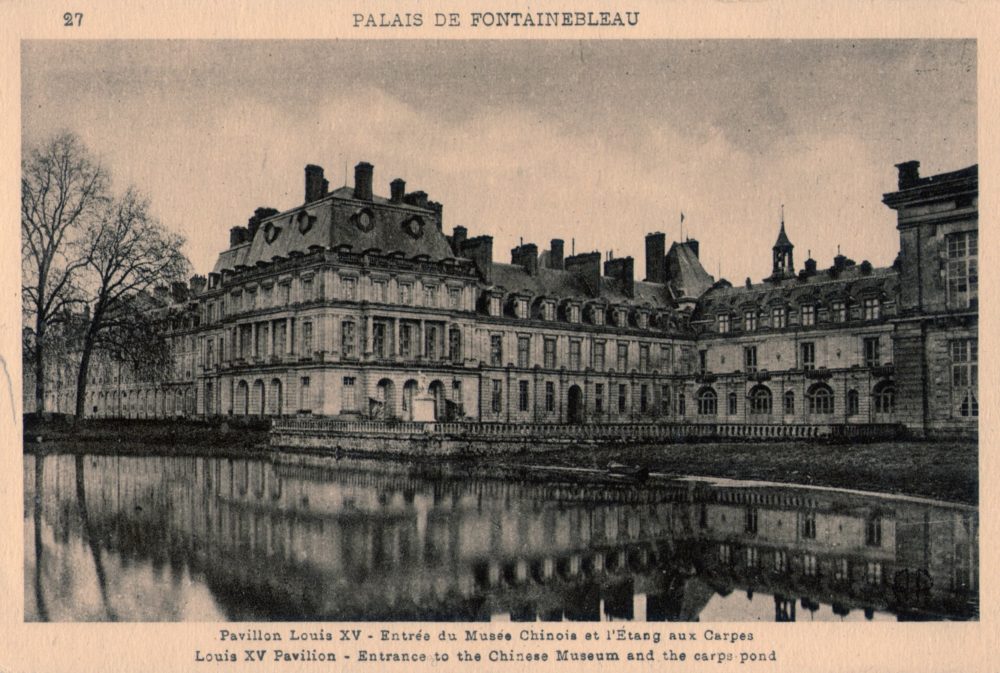