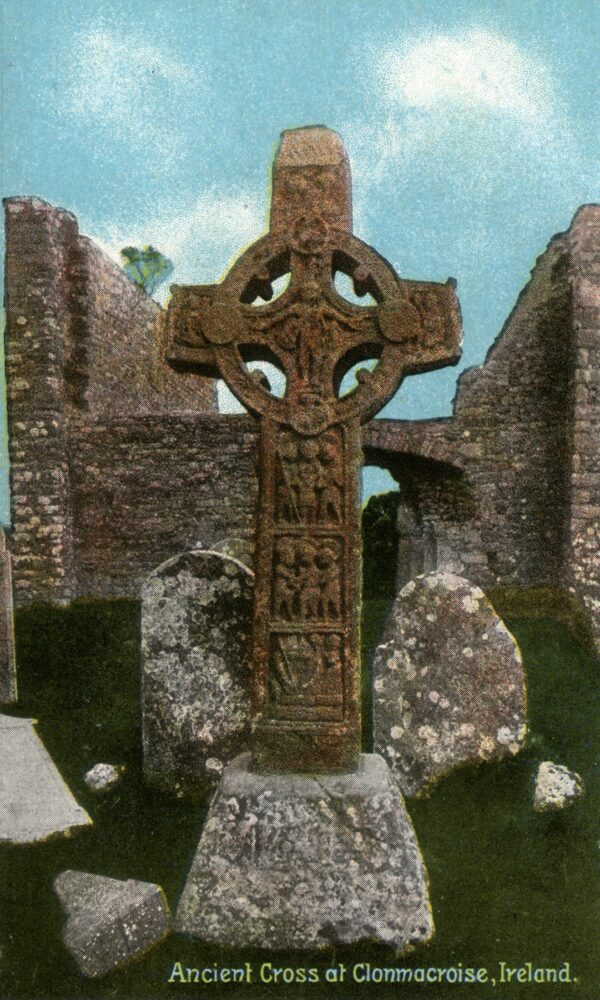 Ancient Cross at Clonmacroise, Ireland
c.1909
Publisher: Shurey’s Publications (1903-1927)
On back: This beautiful Series of Fine Art Post Cards is supplied free exclusively by Shurey’s Publications, comprising “Smart Novels,” “Yes or No.” and “Dainty Novels” The Publications are obtainable through Great Britain, the Colonies and Foreign Countries””

Amongst the many remains at Clonmacnois are two complete High Crosses plus the shaft of another. The most famous, the Cross of the Scriptures, also known as King Flann’s Cross, is the centre-piece of the new interpretive centre. The crosses were moved from their original positions in 1991 into the new centre and superb replicas were placed outside in the original positions. Pictured right is the west face of the Cross of the Scriptures. Shown from the bottom panel up: Soldiers guarding the tomb of Christ, the arrest of Christ, Flagellation and in the centre of the ring the Crucifixion. This cross is decorated with figure sculpture on all four sides.
Megalithic Ireland.

Cross of the Scriptures: This 4-metre-high sandstone cross is one of the most skilfully executed of the surviving high crosses in Ireland, and of particular interest for its surviving inscription, which asks a prayer for Flann Sinna, King of Ireland, and Abbot Colmán who commissioned the cross. Both men were also responsible for the building of the Cathedral. The cross was carved from Clare sandstone c.900. The surface of the cross is divided into panels, showing scenes including the Crucifixion, the Last Judgement, and Christ in the Tomb. The original was moved into the visitors’ centre in 1991 to preserve it from the elements; a replica stands at the original site.
Wikipedia.