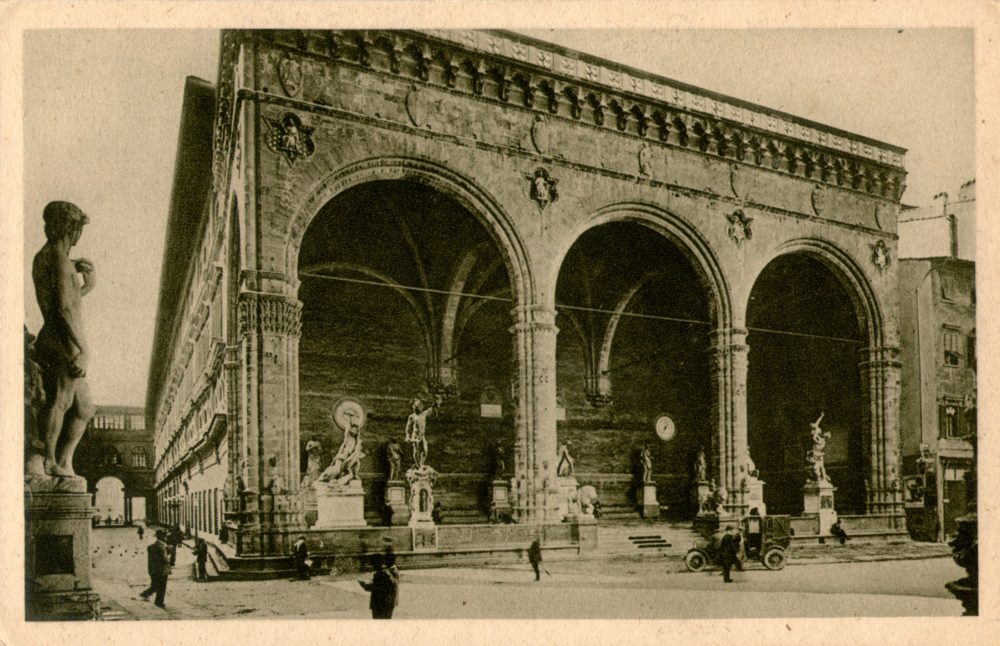 The Loggia dei Lanzi, also called the Loggia della Signoria, is a building on a corner of the Piazza della Signoria in Florence, Italy, adjoining the Uffizi Gallery. It consists of wide arches open to the street. The arches rest on clustered pilasters with Corinthian capitals. . . . Sometimes erroneously referred to as Loggia dell’ Orcagna because it was once thought to be designed by that artist, it was built between 1376 and 1382 by Benci di Cione and Simone di Francesco Talenti, possibly following a design by Jacopo di Sione, to house the assemblies of the people and hold public ceremonies, such as the swearing into office of the Gonfaloniers and the Priors. Simone Talenti is also well-known from his contributions to the churches Orsanmichele and San Carlo. . . . The name Loggia dei Lanzi dates back to the reign of Grand Duke Cosimo I, when it was used to house his formidable landsknechts (In Italian: “Lanzichenecchi”, corrupted to Lanzi), or German mercenary pikemen. After the construction of the Uffizi at the rear of the Loggia, the Loggia’s roof was modified by Bernardo Buontalenti and became a terrace from which the Medici princes could watch ceremonies in the piazza.
Wikipedia

The Loggia dei Lanzi is a beautiful arched gallery that was built in the 14th century at the Piazza della Signoria right in front of the Palazzo Vecchio. This famous loggia served as a model for many loggias that were later built across Europe. The original purpose of the loggia was to shield dignitaries from the elements during ceremonies, public meetings and events. Today it houses a number of statues, the most notable being a statue showing Perseus after he killed Medusa.
A View on Cities

Construction occurred between 1376 and 1382. The beautifully proportioned open gallery was designed in a late Gothic style, a clear precursor to the soon to be popular Renaissance style. Michelangelo, one of the most prominent Renaissance artists, even proposed to extend the gallery along all sides of the Piazza della Signoria, but Cosimo I de’ Medici, Duke of Florence, eventually decided it would be too expensive. The loggia originally served to house the assemblies of the people, and hold public ceremonies and the official ceremonies of the Florentine Republic.
Florence Inferno 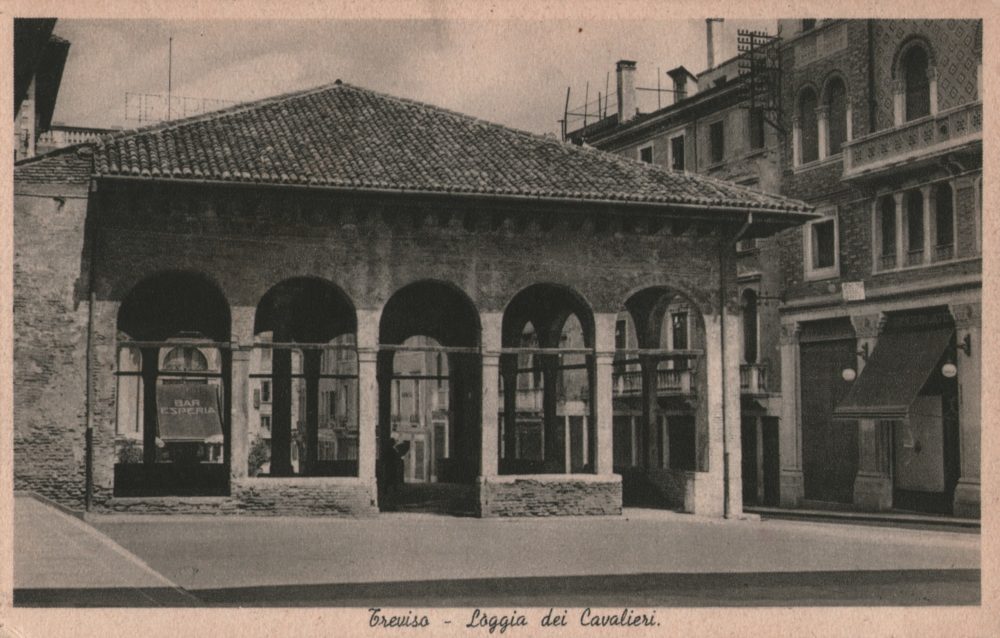 “The Loggia dei Cavalieri is one of Treviso’s landmark sights. Standing proudly in Via Martiri della Libertà the beautiful pavilion-like structure was built in the late 1200s as a covered outdoor gathering place for the city’s noblemen. They would spend the evenings playing cards, discussing politics, or enjoying parties within the open-air protection of the arches. ”
(From https://www.summerinitaly.com/guide/loggia-dei-cavalieri)

Wikipedia in Italian, with photos.