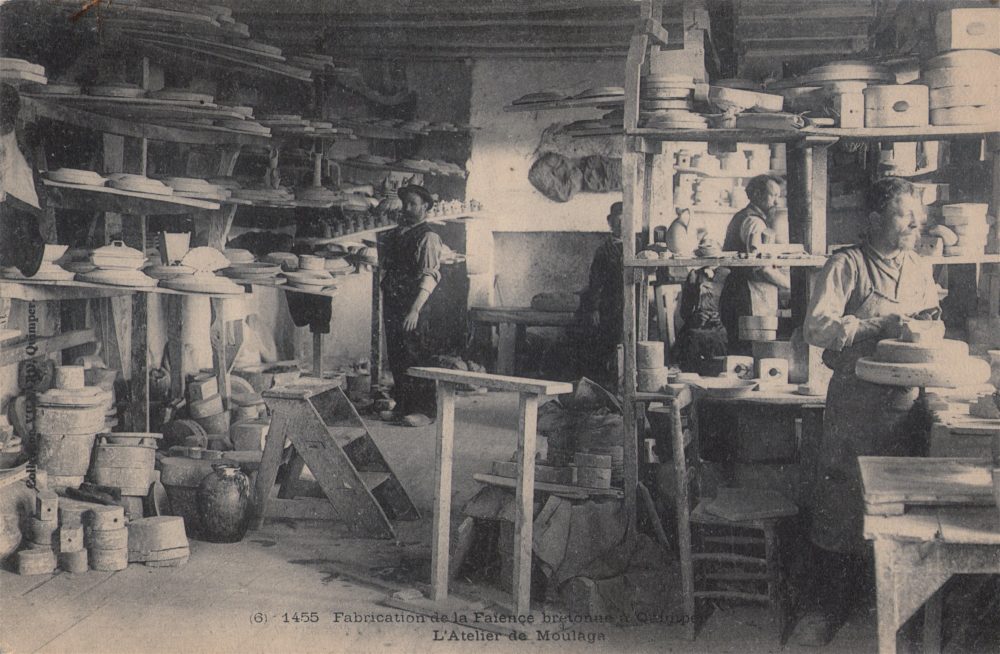 Quimper faience is produced in a factory near Quimper, in Brittany, France. Since 1708, Quimper faience (“faïence” in French) has been painted by hand, and production continues to this day. The “Faïenceries de Quimper” were established in “Locmaria”, the historical faience quarter of the city of Quimper, near the center. The Faïencerie d’Art Breton, newly created in 1994, was also established in Quimper, but outside the historical quarter “Locmaria”. “Locmaria” now also houses a Quimper faience museum. The pottery’s design reflects a strong traditional Breton influence. One famous design which became typical for Quimper faience is the “petit breton”, a naive representation of Breton man and/or woman in traditional Breton costume. The “petit breton” became popular around 1870 and is still today the main design bought by tourists.
Wikipedia.

The oldest manufacturer of Quimper Faience is the Grande Maison HB-Henriot, which has continuously produced country pottery, specialising, in tobacco pipes made of white clay. But, at the end of the 15th Century, the arrival of Jean-Baptiste Bousquet in Locmaria (originally from the Moustier region) truly marked the beginning of “three centuries of Faience”. He could not have found a better environment to set up the factory – large timber promising combustion, an easily navigable river and low-cost labour. The first piece of faience was brought out in 1708, when his son, Pierre, master ‘faiencier’, came to join him in Quimper.
HB-Henriot Quimper Faience: Three Centuries of History, Passion and ‘Savoir-Faire’ (pdf)