Mount Vernon is an American landmark and former plantation of George Washington, the first President of the United States, and his wife, Martha. The estate is on the banks of the Potomac River in Fairfax County, Virginia. It is located south of Washington, D.C. and Alexandria, Virginia and is across the river from Prince George’s County, Maryland. The Washington family acquired land in the area in 1674. Around 1734, the family embarked on an expansion of its estate that continued under George Washington, who began leasing the estate in 1754 before becoming its sole owner in 1761. The mansion was built of wood in a loose Palladian style; the original house was built by George Washington’s father Augustine, around 1734. George Washington expanded the house twice, once in the late 1750s and again in the 1770s. It remained Washington’s home for the rest of his life. Following his death in 1799, under the ownership of several successive generations of the family, the estate progressively declined as revenues were insufficient to maintain it adequately. In 1858, the house’s historical importance was recognized and it was saved from ruin by the Mount Vernon Ladies’ Association; this philanthropic organization acquired it together with part of the Washington property estate.
Wikipedia. 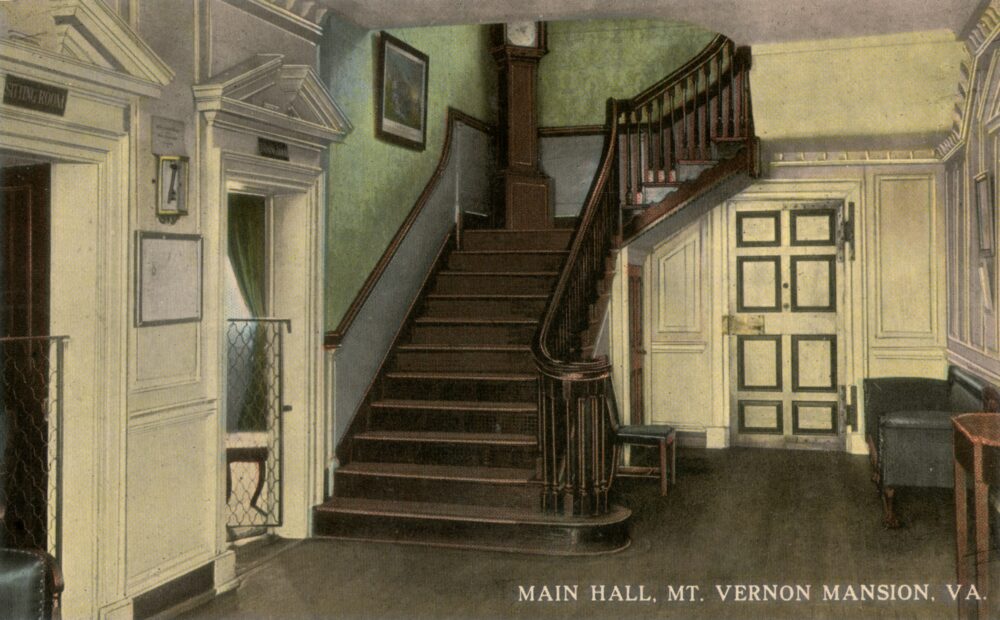 Main Hall, Mt Vernon Mansion, VA.
On back:
MAIN HALL, MOUNT VERNON MANSION, VA.
This is the central hall of Washington Mansion at Mt. Vernon. It is a beautiful example of the architecture of Colonial days.
Publisher: B.S. Reynolds, Washington, D.C. 1902-1948

The central passage is the entryway into the Washingtons’ home, the place where visitors who came by carriage through the west front drive were greeted. Entertaining also occurred in the central passage, particularly during hot Virginia summers when the family gathered here to enjoy breezes from the open doorways.
George Washington’s Mount Vernon

Today meticulously restored to its appearance in 1799, the mansion preserves the legacy of this great American. Three rooms are on either side of the wide central hall on the first floor. The front parlor, music room, and the grand two-story large dining room are located north of the center hall. A small dining room, a first floor bedchamber, and Washington’s private study are on the south side of the house. The second floor contains six bedrooms, including the master bedroom, with its narrow staircase leading directly to Washington’s study below. The third floor has more bedchambers, including the small garret chamber to which Martha Washington retreated after her husband’s death.
National Parks Service 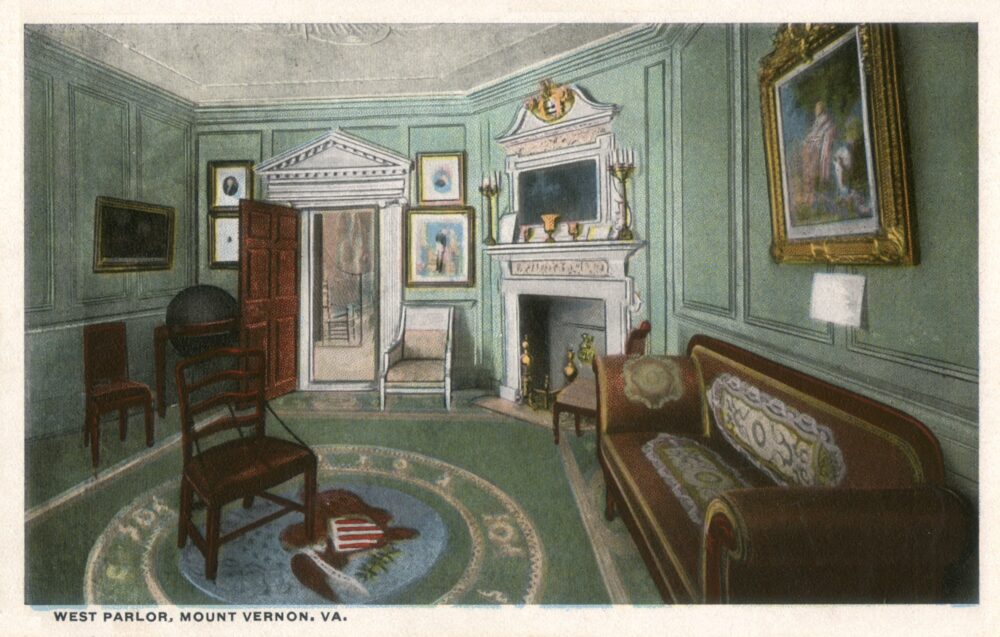 West Parlor, Mount Vernon, VA.
On back:
WEST PARLOR, MT. VERNON, VA.
In the West Parlor much of the furnishing was here in Washington’s day. The rug here was made by order of Louis XVi for Washington. It is of a dark green ground; in the center is the America eagle surrounded with stars.
1920s
Publisher: B.S. Reynolds, Washington, D.C. 1902-1948

Before the New Room was completed, Washington considered the front parlor to be “the best place in my House.” This elegant room was a public space where visitors enjoyed the Washington family’s company. Tea and coffee were customarily served here during the winter and on rainy days, and the household gathered here in the evenings to read, discuss the latest political news, and play games.
George Washington’s Mount Vernon