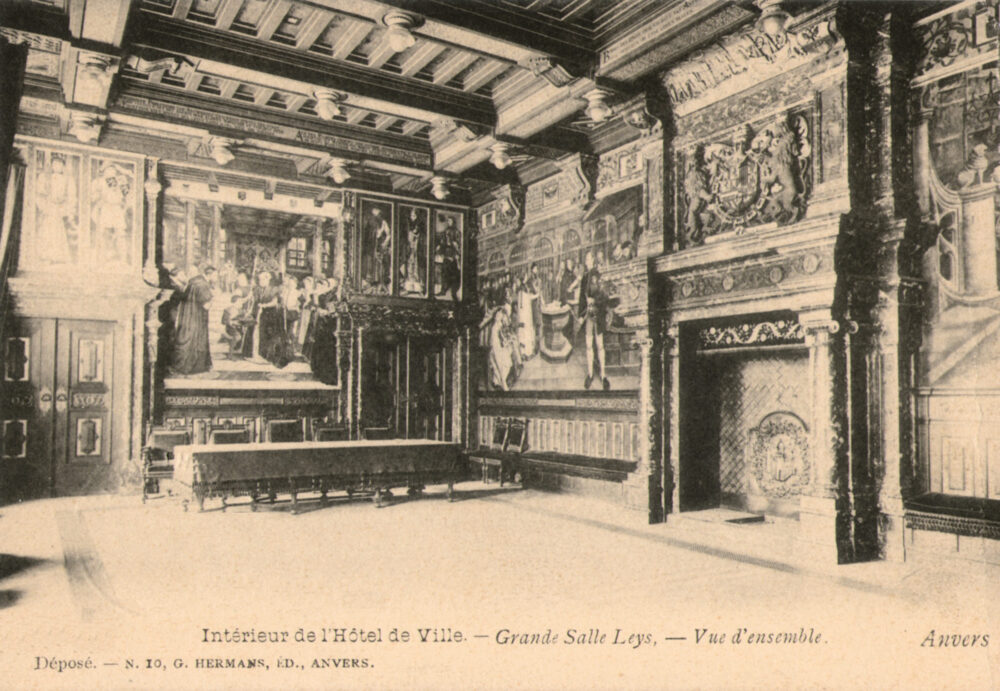 In the beginning of the 16th centrury, the city had made plans to build a new town hall in Gothic style, much like the town halls of Leuven, Brussels and Oudenaarde. However, they had to use their construction material and money to defend themselves against attacks from the Army of Maarten van Rossem from Gelre. It was only twenty years later that the financial position of the city had improved to such an extent that the plan for a new building for the mayor was unshelved. But, by this time fashion had changed. The Gothic style was out and replaced by the Renaissance style. The building clearly is a Renaissance building (look at the superposition of Dorian and Ionic colons), but the middle section still clearly resembles the towers of the many Gothic Flemish and Brabantine town halls. This atypical Renaissance middle makes this building more beautiful. Think that it were not there (hold a paper above the middle of the picture), and see what remains: a boring building seeming very flat and low). The 45 doors in the ground floor were built to house little shops. The rent that the shop-keepers had to pay was used to help finance the construction of this building.
Belgiumview (more pictures)

Renovations during the late 19th century by architects Pierre Bruno Bourla, Joseph Schadde and Pieter Jan August Dens drastically modified the interior. Much of the stately decoration dates from this period, as does a roof over what was once an open-air inner courtyard. A number of the leading Antwerp historical painters were invited to assist with the decorations. Henri Leys painted a series of murals depicting key events in Antwerp’s history and portraits of former Belgian rulers for the Leys Hall.
Wikipedia.

Leyszaal
Hendrik Leys and the city’s keeper of the records Pieter Génard conceived a whole scenario for this showpiece room. The portraits of the dukes and emperors that had granted Antwerp privileges are hung above the doors. The large tableaux on the walls illustrate the freedoms of the city before 1794. Leys began work in 1864. He had completed eleven portraits and four large tableaux by the time of his death five years later.
City Mayors 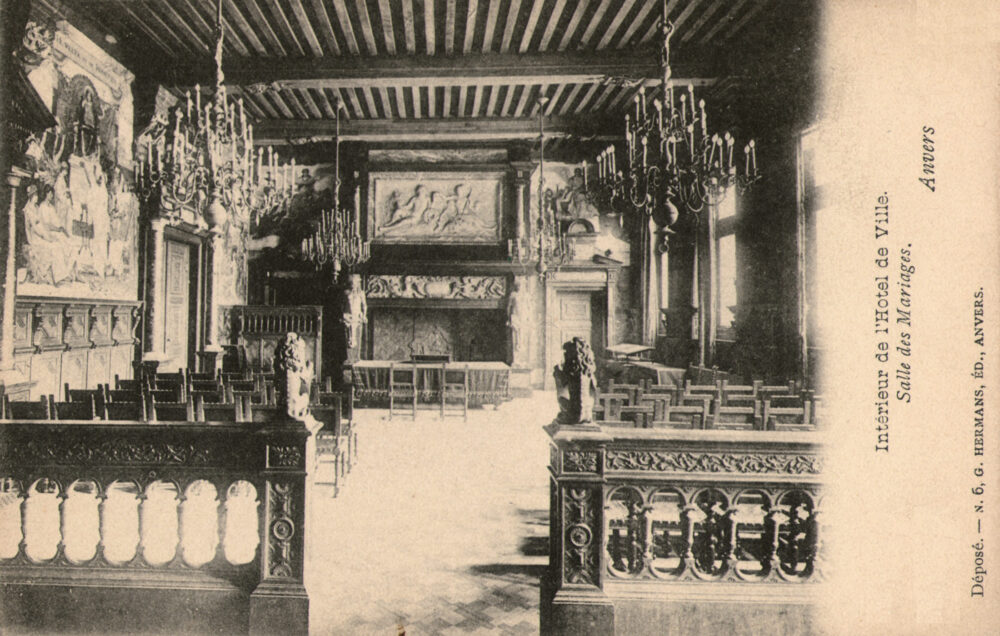 Victor Lagaye (1825–1896) painted the five murals of weddings performed in different historical periods: the era of the Ancient Belgians; the Roman epoch; a Christian ceremony celebrated by Saint Willebrord in 650; the aristocratic wedding of Philip the Beautiful and Johanna of Castilla in 1497; and a civil ceremony of the 17th Prairal of 1796 (in accordance with the law of the 17th Prairal of the year IV in the French revolutionary calendar). There are two allegorical wedding tableaux by Lagaye beside the fireplace. On the left is The Union of Trade and Industry; on the right The Union of Science and Literature. Cornelis Floris designed the fireplace and he sculptured two caryatides in alabaster himself. In 1886 Saldis and Amfitrite, the bas-relief by G. Geefs, was placed above the mantelpiece. It symbolises the river Scheldt and the Sea.
City Mayors

Antwerp City Hall was constructed between 1561 and 1565 under the supervision of the master builder Cornelis II Floris de Vriendt, with the collaboration of the Italian Nicolo Scarini, among others. It is in the Flemish-Italian Renaissance style, also known as the Floris style, a conspicuous innovation in the Netherlands of the sixteenth century that was imitated as far away as Scandinavia. Mutinying Spanish sailors torched the building during the Spanish Fury of 1576, but it was rebuilt in 1579. The city hall originally had an open-air inner courtyard. A roof was added during a thorough renovation in the nineteenth century. Most of the present interior, including a large number of wall panels, dates from that period.

The Aldermen of Antwerp were given a building—het Schepenhuis—for the city’s administration and their meetings around 1406. The Lakenhal was situated next to the Schepenhuis. Antwerp’s economy grew fast in the years following its construction. Around 1450 the city’s population was 20,000 or so, but by the middle of the sixteenth century Antwerp was home to around 100,000 people and the largest city north of the Alps after Paris. The workload of the Mayors and Aldermen increased progressively and the old Schepenhuis became far too small. It was also felt to be too undistinguished for such a large city. . . In 1560 the magistrate decided to build a city hall on the broad western side of Grote Markt, the main market square, which was owned by the city. That meant that no money would have to be spent on purchasing the land and shops could be developed at street level, generating rents that would cover some of the construction costs. This time there was a clear preference for a building in the new Renaissance style. The city managers set up a committee of ten experts, who came to agreement on a design. The Antwerp members included the sculpture, architect and designer Cornelis II Floris (1513–1575), and the artists Jan Metsys and Lambert van Noort. Florentine master builder Nicolo Scarini was one of the committee’s foreign members. The inauguration took place on 27 February 1565, four years after the first stone was laid.
City Mayors 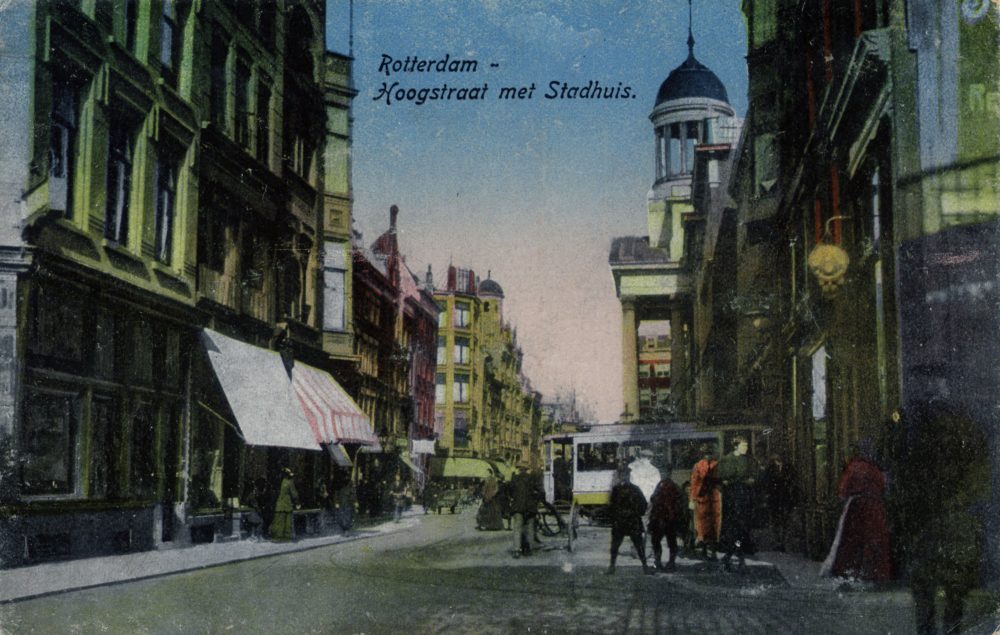 History of the Rotterdam City Hall (in Dutch) 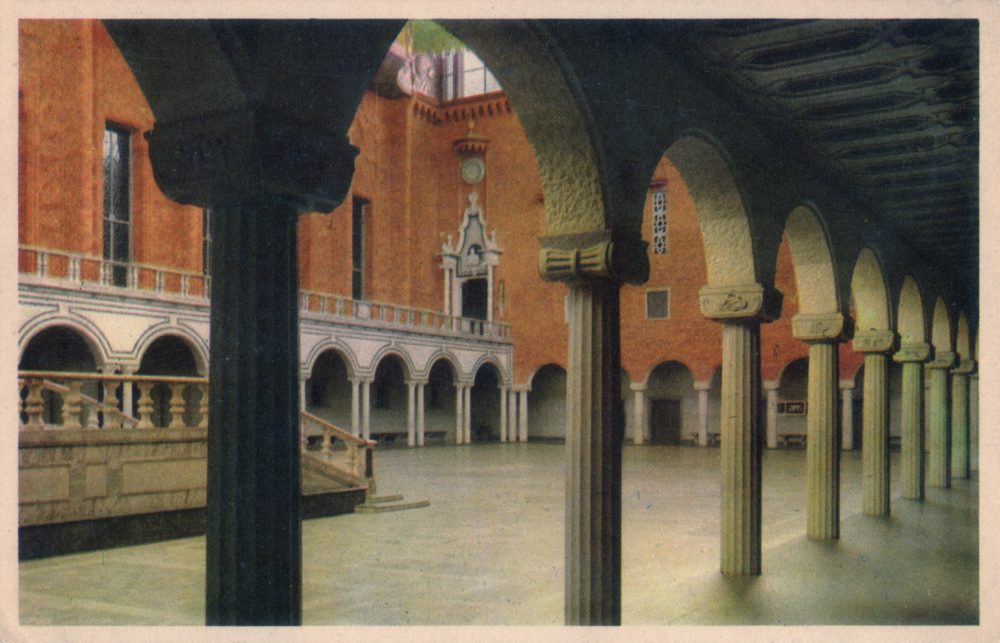 In 1907 the city council decided to build a new city hall at the former site of Eldkvarn. An architectural contest was held which in the first stage resulted in the selection of drafts by Ragnar Östberg, Carl Westman, Ivar Tengbom jointly with Ernst Torulf, and Carl Bergsten. After a further competition between Westman and Östberg the latter was assigned to the construction of the City Hall, while the former was asked to construct Stockholm Court House. Östberg modified his original draft using elements of Westman’s project, including the tower. During the construction period, Östberg constantly reworked his plans, resulting in the addition of the lantern on top of the tower, and the abandonment of the blue glazed tiles for the Blue Hall.

Oskar Asker was employed as construction leader and Paul Toll, of the construction company Kreuger & Toll, designed the foundations. Georg Greve also assisted in preparing the plans. The construction took twelve years, from 1911 to 1923.
…
The site, adjacent to Stadshusbron, being bordered by the streets of Hantverkargatan and Norr Mälarstrand to the north and west, and the shore of Riddarfjärden to the south and east, allowed for a spacious layout. The building follows a roughly rectangular ground plan. It is built around two open spaces, a piazza called Borgargården on the eastern side, and the Blue Hall (Blå hallen) to the west. The Blue Hall, with its straight walls and arcades, incorporates elements of a representative courtyard. Its walls are in fact without blue decorations, but it has kept its name after Östberg’s original design.
Wikipedia. 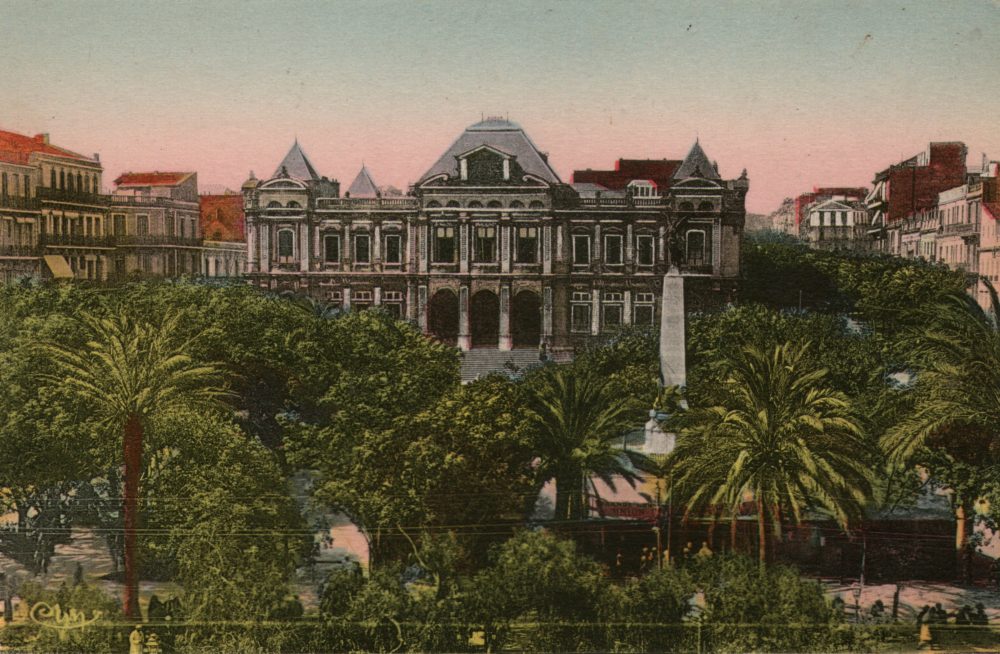 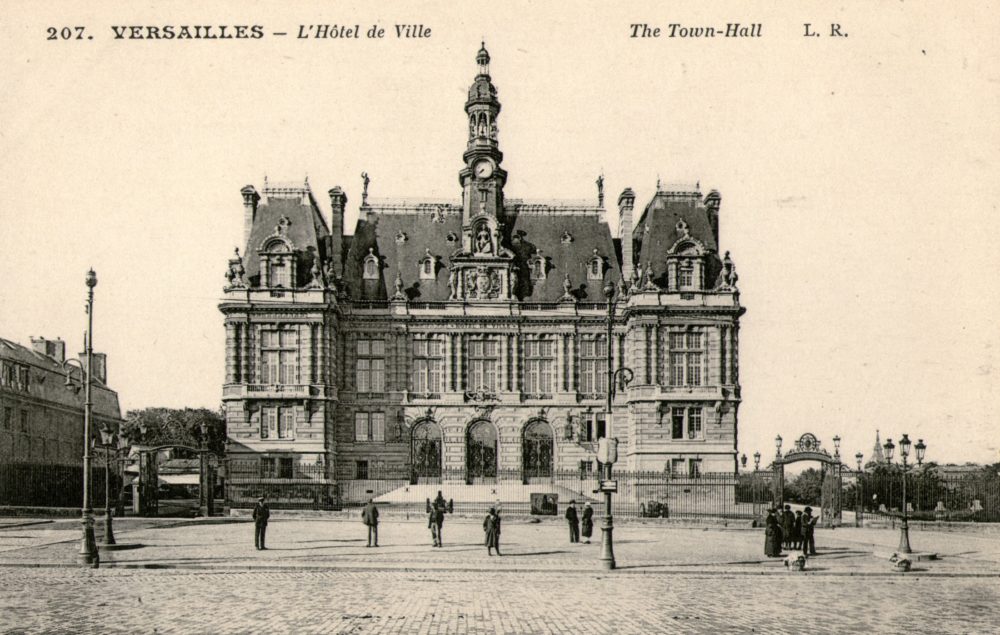 The Versailles City Hall, is a witness of the history of Versailles. This property of a natural daughters of Louis XIV came under Louis XV to the Grand Master of the Royal Household who redesigned and rebuilt in 1900. The Versailles Hotel de Ville (city hall) consists of two distinct parts: along the rue du Général de Gaulle, facing the palace, sits a low building preceded by a wide staircase. This is the first city hall, established in 1790 in the old hotel de Conti. This property, belonging to one Louis XIV’s illegitimate daughters, passed under Louis XV to the Grand Master of the king’s household, who had it refurbished. Paneling from this period is preserved in the modern part of the building. The house, facing the avenue de Paris, is an imposing neo-Louis XIII building designed by H. Legrand, dating from 1897-1900.
Versailles Tourisme

The Versailles City Hall (Hôtel de Ville) that you will see today isn’t very old, but the original building dated back to the late 17th century and the “new” building has kept much of the early architecture. The original building was constructed in 1670 for the Marquis de Bellefonds, Bernadin Gigault. It was a beautiful chateau with grounds stretching to the edge of the gardens of the palace. . . . The princess [Marie-Ann] later sold the chateau to a speculator who stripped the building of its furniture and finery. In 1723 Louis 15th bought it for his Prime Minister, Louis-Hénri de Bourbon. He had it renovated and opened the grounds to the public giving them easier access between the Saint Louis and Notre Dame districts. During the French Revolution it became the “temporary” seat of the Town Council. In 1821 they were still there and the chateau became the official Hôtel de Ville. In 1899 the building was too small and the Mayor Edouard Lefbvre had it pulled down and commissioned Hénri le Grand to build the new City Hall, based on plans of the chateau.
GPSMyCity