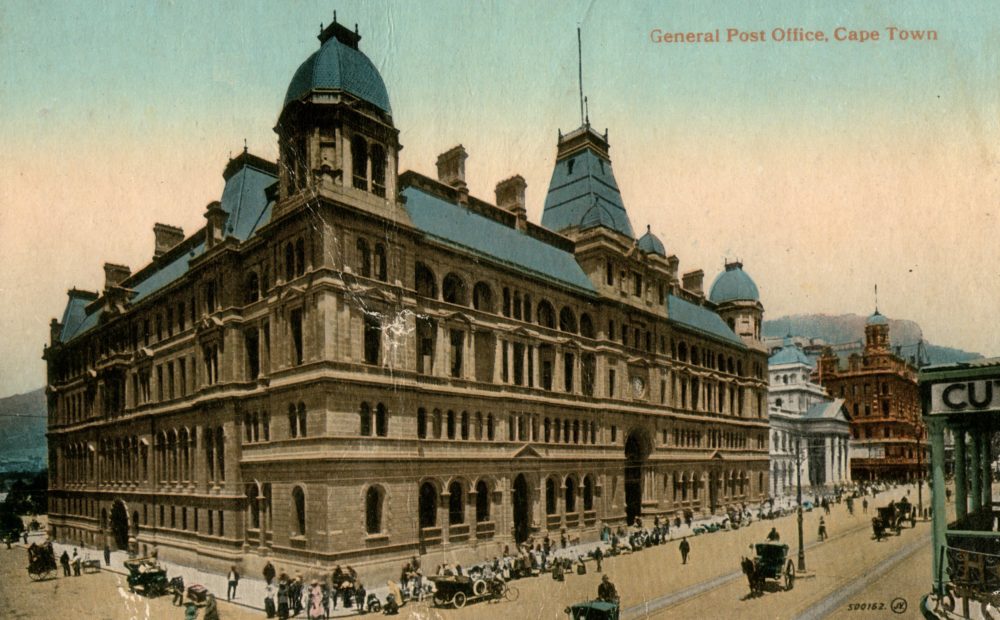 Google Street View (as best I can tell, the page was being stupid and jumping about and not loading). 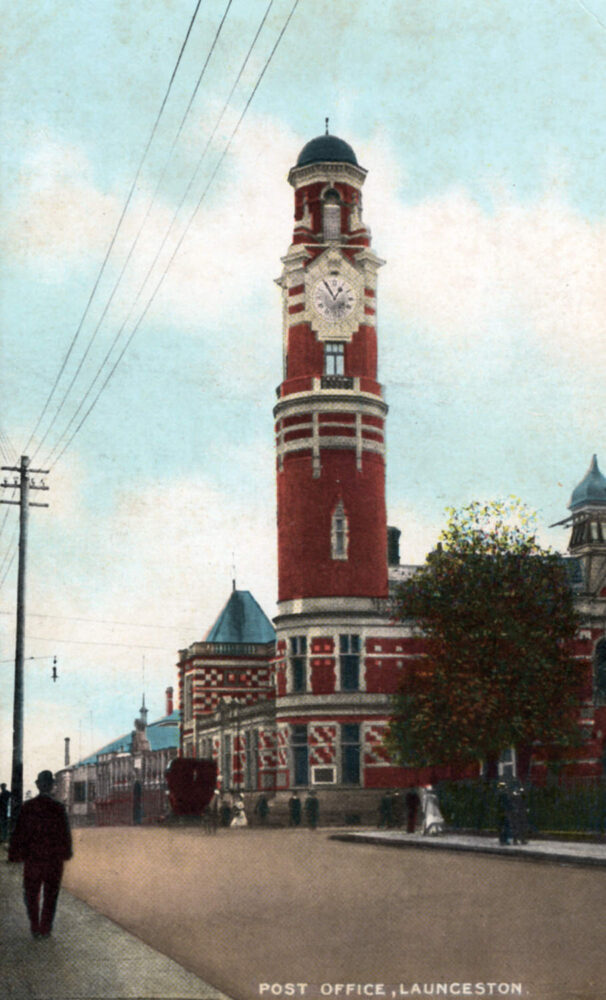 Launceston Post Office was designed by the Tasmanian Government Architect William Waters Eldridge who had inspected the site in January 1885. Eldridge had recently completed a design for the Hobart Supreme Court buildings (1884–87) and his working drawings for the Launceston Post and Telegraph Office are dated 8 July 1885. On 23 November 1885, the building contract was awarded to James Hill (or Hills?). On 24 March 1887, the contract was transferred to John and Thomas Gunn who completed most of the construction by 1889. The design of the corner turret as a low conical spire was not well received by the public, and various modifications were put forward. In February 1890, a design by architects Corrie & North for a taller cylindrical tower topped by an octagonal pointed roof was accepted. On 22 December 1890 the telegraph office was opened and in January 1891, postal services were transferred from the government offices and the building opened.

When opened, the building was not well received by the local community; the bold external patterning and colour was considered controversial, as was the interior arrangement of the mailroom and quadrangle. Some asserted the design to be “the last and grossest insult to the people of Launceston” and called for its demolition. Further, by error, the tower was constructed without provision for a clock as originally intended.The matter of the clock resurfaced during the city’s 1906 centenary celebrations and the Launceston Clock and Chimes Committee was formed to initiate a public subscription push to fund its installation. The committee raised an estimated £1,339 for the purpose, but also used the opportunity to redress the presentation of the upper tower by replacing the top section with a taller design. In January 1908, Inspector-General Colonel Percy Owen the Commonwealth Department of Home Affairs Works Division, which had taken over responsibility for post office design following the passage of the Commonwealth Post and Telegraph Act in 1902, presented two bell tower options to the committee. Their preferred design was selected and an order placed with Gillett and Johnston of Croydon of Surrey, England for the clock and bells. The design for the Edwardian Baroque tower top, with clocks in all 4 faces, was by Hedley Westbrook, possibly under the supervision of the Commonwealth Senior Architect John Smith Murdoch, and working drawings were prepared by May 1908. The clock and bells were installed in October 1909 and the tower completed in 1910.
Wikipedia.

In the meantime, the site for a new Post and Telegraph Office was selected and in early 1885 the Government Architect, William Eldridge, prepared some plans that promised a handsome and ornamental building. It was to include a circular corner with the provision for one clock face and finished with an arched tower and a cupola.
James Hills won the tender to erect the Post Office, starting in December 1885, with completion expected in two years. The Launceston Council accepted another offer from the Premier for the Port Arthur clock to be erected in the tower of the new Post Office. The Daily Telegraph was again outraged that a “relic of barbarism” was so readily accepted by the Aldermen when the “people of Launceston are desirous of wiping out the very name of Port Arthur … [and will protest] against the tower of one of their handsomest public buildings be made a receptacle for a cast off clock from the most notorious penal station in the British dominions.” There was a flurry of letters, and even a poem, sent to the editors of newspapers urging the Council to reject the offer “with scorn and indignation.” The Council replied that the clock suitable for the Post Office tower “should have four faces, strike the hours and quarter-hours, and be illuminated at night.” As the Port Arthur clock did not have these qualities it was not suitable after all. In March 1887 Mr Hills handed over his contract to build the Post Office to J. and T. Gunn. By July 1889 the “fine and attractive looking edifice” was nearing completion, except for the tower. Finished before the end of the year, the stunted tower was considered ugly and an embarrassment to the city.
. . .
The Federal Government made it clear that it had “no money to spend on towers or clocks.” In 1904 the Mayor, JW Pepper, raised the idea that a clock and chimes would be a suitable memorial of the 1906 centenary of British settlement in Northern Tasmania and that money could be raised by public subscription. . . . In January 1908, the Launceston Council accepted plans for alterations to the tower drawn by John Smith Murdoch, Commonwealth Architect. In May 1908, J. and T. Gunn secured the contract for 860 pounds and started work in June. A clock chamber and belfry some 16 feet higher than the previous structure, capped by a cupola, replaced the top portion of the tower. The lower balcony and archway were removed, as was a vertical strip of stonework beneath it. Finished in February 1909, the citizens finally had a tower of which they could be proud.
Marion Sargent, Launceston Historical Society (Facebook) 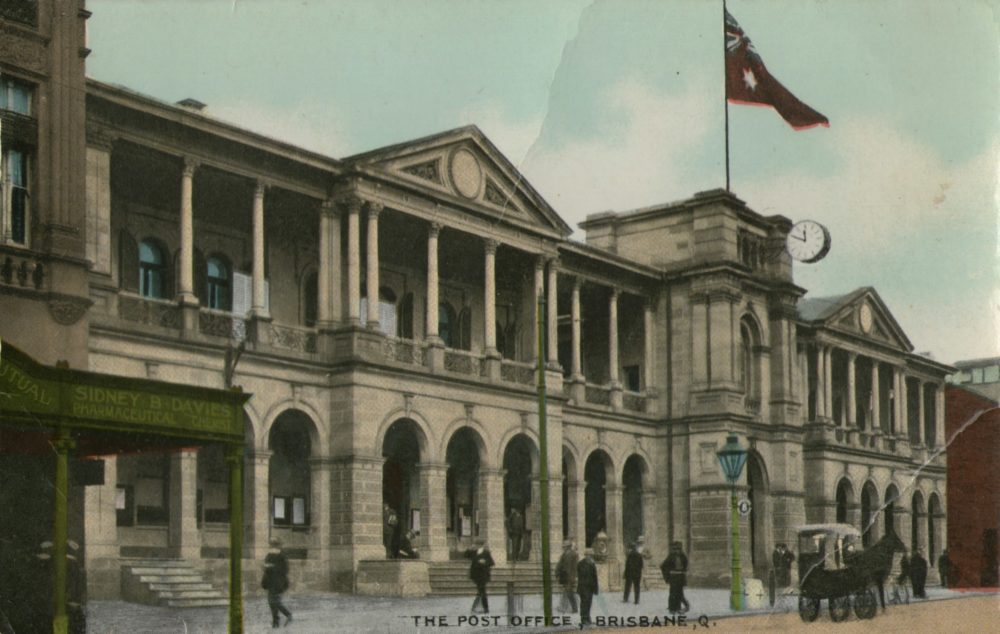 With the old prison and one time police quarters demolished, colonial architect FDG Stanley came up with the Italianate design for the GPO and twin Telegraph Office. Although the GPO was completed in 1872, the central tower (a scaled down version of a more grandiose proposed clock tower) and Telegraph Office weren’t built until 1877-79. Between 1873 and 1879 the Queensland Museum occupied the GPO before moving to the William St premises of the Old State Library. Meantime the Telegraph Office’s claim to fame was its introduction, in 1892, of the typewriter as a business tool. Three Ideal Hammond typewriters were purchased and made their debut at his office, the first in Australia to use them with other colonies fast following suit. Of further note are the clock which has been incorporated into the pediment at the top of the buildings and the ornamental crown in the balustrading of the first floor.
Must Do Brisbane