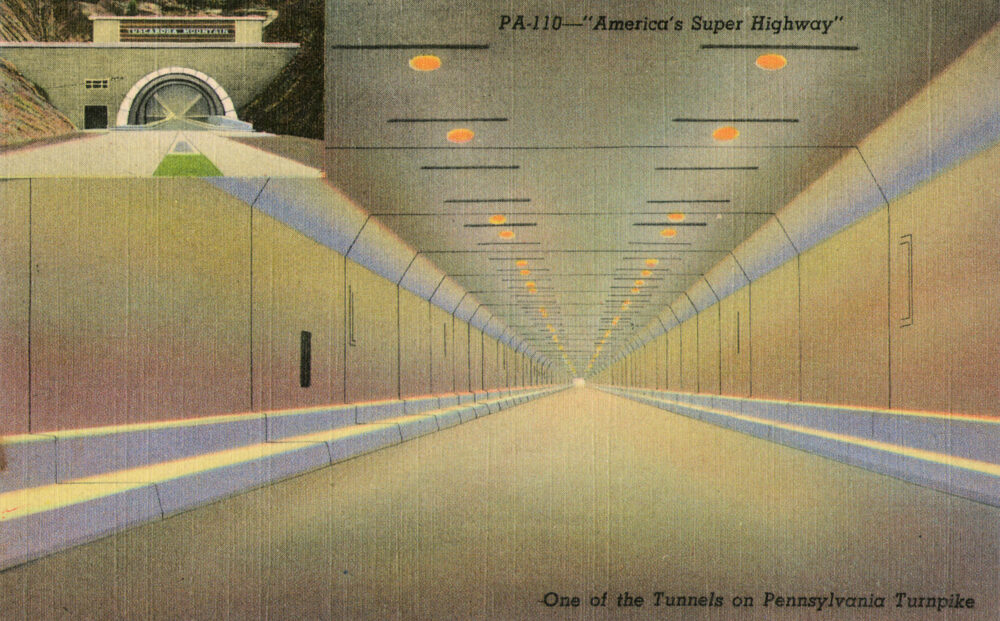 PA-110–“Amerca’s Super Highway”
One of the Tunnels on Pennsylvania Turnpike
On the back:
PA100–One of the seven tunnels carrying the Turnpike beneath formicable mountains, six were inherited from the old rail project. The interior view of the Allegheny tunnel, near New Baltimore and the entrance to the Tuscarora is shown. Others at Laurel, Allegheny, Ray’s Hill, Sideling Hill, Tuscarora, Kittatinny, Blue Mountain.
c.1940
Publisher: Minsky Bros & Co., Publishing Division, Pittsburgh, PATuscarora.

During most of its first two decades the Pennsylvania Turnpike was promoted and considered by many as “The Crown Jewel” of the American highway system. The highway was spoken in magnificent terms and was touted as a modern example of safe, high speed, and scenic travel. However, soon after the birth of the Interstate system in 1956, the PA Turnpike would become outdated in comparison to the more modern Interstate
Gribblenation (more postcards)

William H. Vanderbilt proposed an idea to build a railroad from Harrisburg to Pittsburgh that would be under his control, and not that of the Pennsylvania Railroad. After the surveying was complete, work began on a two-track roadbed with nine tunnels. Excavation began on the tunnels in early 1884. Thousands of workers dug the tunnels for $1.25 for a 10 hour day. The construction continued through 1884 and 1885; however, trouble for the project was starting in New York. Banker J. Pierpont Morgan won a seat on the board of Vanderbilt’s New York City & Hudson River Railroad. Morgan with the President of the NYC&HRRR sold the right-of-way to George B. Roberts, President of the Pennsylvania Railroad. Work stopped immediately. A total of $10 million had been spent and 26 workers lost their lives. The unfinished project came to be known as “Vanderbilt’s Folly.”
. . .
The twentieth century came and with it a new form of transportation: the automobile. Pennsylvania was one of the first states to establish a highway department. In late 1934, an employee with the State Planning Board named Victor Lecoq and William Sutherland of the Pennsylvania Motor Truck Association proposed the idea of building a toll highway utilizing the old roadbed and tunnels left behind.
Pennsylvania Highways

The reports of the survey crews were favorable, and in 1937 the Pennsylvania Turnpike Commission was established with Walter A. Jones of Pittsburgh named the first commission chairman. The Turnpike Commission was given authorization to construct a 160-mile long 4-lane limited access superhighway through the Allegheny Mountains from Irwin (just east of Pittsburgh in Westmoreland County) to Carlisle (just west of Harrisburg in Cumberland County). This highway was the first of its kind in the United States. Nobody had ever seen a road like this before, except at the General Motors Futurama exhibit at the 1939 New York Worlds Fair. Design features for the new road were:

The PA Turnpike officially entered service October 1, 1940 and the new concepts of superhighway design made it an engineering marvel. The new, mostly four-lane roadway was referred to as “America’s First Superhighway.” Planners predicted that 1.3 million vehicles would use the PA Turnpike each year, but early usage exceeded predictions with 2.4 million vehicles traveling the PA Turnpike annually. Sometimes, as many as 10,000 vehicles per day were recorded. When the PA Turnpike opened, it was just 160 miles long stretching from Carlisle to Irwin. It included two-lane tunnels, but the rapidly increasing traffic volumes soon made the two-lane tunnels obsolete and prompted consideration of by-passing or “double tunneling” the seven original tunnels. In addition to reducing travel time between Pittsburgh and Harrisburg by three hours, the PA Turnpike created an economic boom to areas along its path.
Penna Turnpike 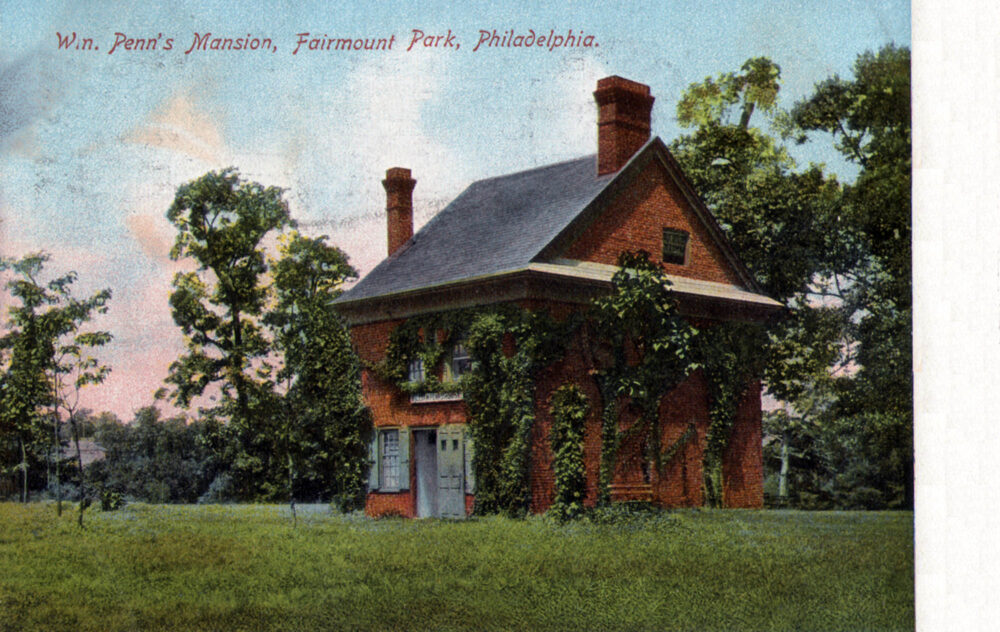 Until the 20th Century, this small unassuming brick townhouse on Letitia Street (now relocated to Girard Avenue) was assumed to have been built in anticipation for the first arrival of William Penn in the New World. Instead, the story of the Letitia Street House is indicative of the power of rumor, myth and the urge to preserve a historical legacy. This legend seems to have gained popularity in the early 19th Century when Philadelphia historian John Fanning Watson examined records from Gabriel Thomas, one of the first Englishmen in Philadelphia. Before Penn’s arrival in 1682, Thomas described a cellar being dug for the use of the new Governor. Thus, many had theorized on scant additional evidence that the cellar which Thomas was describing was a similar cellar beneath Letitia Street House. When Watson published his Annals of Philadelphia in 1830, the idea spread so far that in 1846, when Penn’s great-grandson Granville John Penn, visited Philadelphia as a guest of honor, he was treated to a reception at Letitia Street House. . . . We now know that the home was constructed not in 1682, but in 1713 by Thomas Chaulkney, a Philadelphia merchant and Quaker preacher. The land had been previously owned by William Penn’s oldest surviving daughter from his first marriage, Letitia Penn Aubrey, for whom the street is named after. However, the house was never intended to be the residence of any member of the Penn family.
The Constitional Walking Tour

Letitia Street House is a modest eighteenth-century house in West Fairmount Park, Philadelphia. It was built along the Delaware riverfront about 1713, and relocated to its current site in 1883. The house was once celebrated as the city residence of Pennsylvania’s founder, William Penn (1644–1718); however, later historical research determined that he never lived there. . . . It was well documented that Penn had rented the Slate Roof House as his city residence during the 1699-1701 second visit — John Penn was born there. But despite that building’s direct associations with the Penn family and Pennsylvania’s colonial government, and despite desperate calls by antiquarians to preserve it, the Slate Roof House was demolished in 1867. Every other building associated with Penn, including his country house, also had been demolished. As the two-hundredth anniversary of Pennsylvania’s 1682 founding approached, there was a desire to honor Penn with a monument. The Letitia Street House became that monument. The Bi-Centennial Association of Pennsylvania was formed to raise funds through subscription to relocate the house, and to organize a week-long anniversary celebration for October 1882. The parades, historical pageants, athletic events (including a regatta on the Schuylkill River), concerts and fireworks went on as scheduled. But relocation of the house wasn’t begun until June 1883, with restoration completed in October.
Wikipedia.

Toward 1680 there appeared for the first time certain brick houses built from the start with a depth of two rooms in each story: the Sergeant house, the Tufts house, and the Perm house, all built within a period of five or six years. The Perm house is even deeper than it is wide. In it the door opens directly into the chief apartment, which must be traversed to reach the rear rooms; but in the other two a central hallway for the first time gives privacy of access. This doubling of rooms and introduction of passages which marked the post-Renaissance dwellings of the continent and of England in the seventeenth century, was, in America also, a symptom of the onset of a new style.
“Domestic architecture of the American colonies and of the early republic”, Fiske Kimball, 1922 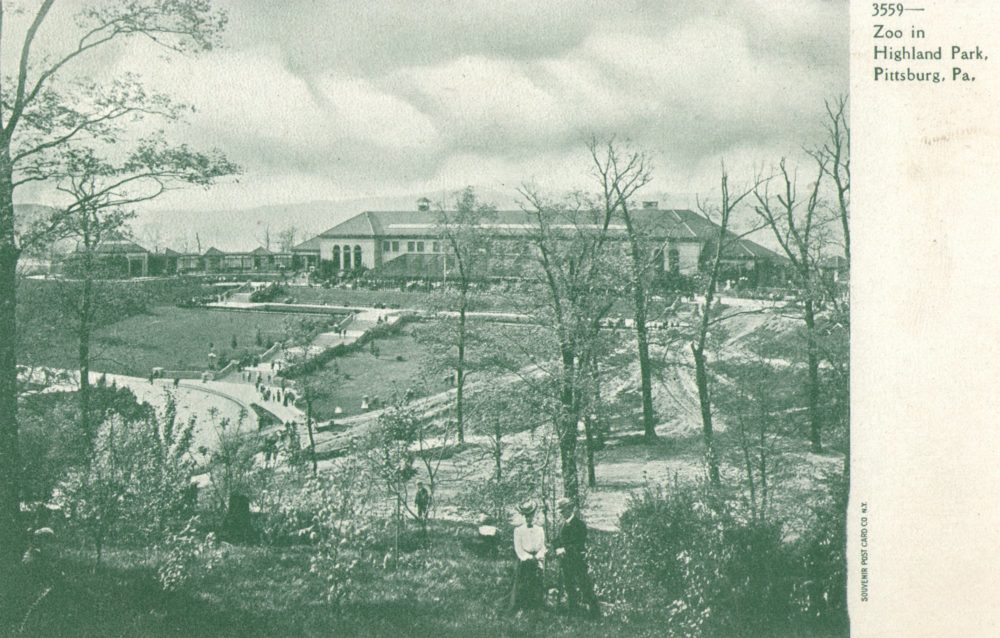 In 1895 the Pittsburgh philanthropist, Christopher Lyman Magee, donated $125,000 for the construction of a zoological garden in Highland Park. The first zoo was comprised of one large building at the top of a long, rolling hill covered with formal flowerbeds. This impressive Victorian-style building was 700 feet in length. Now, landscaped, winding walkways, and naturalistic exhibits have replaced the barred cages of that first zoo.
Historic Pittsburgh

The Highland Park Zoo was the centerpiece attraction in the entire 370 acre Highland Park complex, which also includes the reservoir and scenic park land. The park complex began in the late 1880s and the zoo was established in 1898. The zoo complex was completely overhauled and modernized in 1939.
Brookline Connection (more pictures)

One of the most fascinating zoological buildings, in my opinion ever built was the one that used to be at the Pittsburgh Zoo. Sadly, and incredibly it was demolished in the early 80’s. The only “proof” of it’s existence is the two griffin light poles, sans the lights, above which now stand in front of the Education Building at the zoo.
. . .
In May of 1895, Joseph Lyman Silsbee was chosen as architect for a new building and bridge design for the Zoological Gardens for the City of Pittsburgh to be located in the city’s Schenley Park. . . Silsbee’s zoo structure was a commanding structure situated in a prominent hilltop location in the park. A series of terraces and broad stairways create a formal approach to the main building. Silsbee was responsible for the design of the stairs and likely oversaw the design of the lighting and landscape features as well. The main building was a sprawling symmetrical brick Romanesque structure with a hipped roof and flanked by two octagonal pavilions attached to the main building with curved colonnades. . . . Detailed photos of the structure at the University of Pittsburgh indicate that the clearstory windows were composed of several panes of glass arranged in a cruciform shape. Crisp arches create openings in the building facade at two end bays. A copper cornice and gutter with copper-formed anthemion accents surrounds the main structure. The interior, lit with a skylights, was sparse except for display cases and other cages for animals. The side pavilions had open cages on all sides and were topped with a clay tile roof.
The Circus “No Spin Zone” 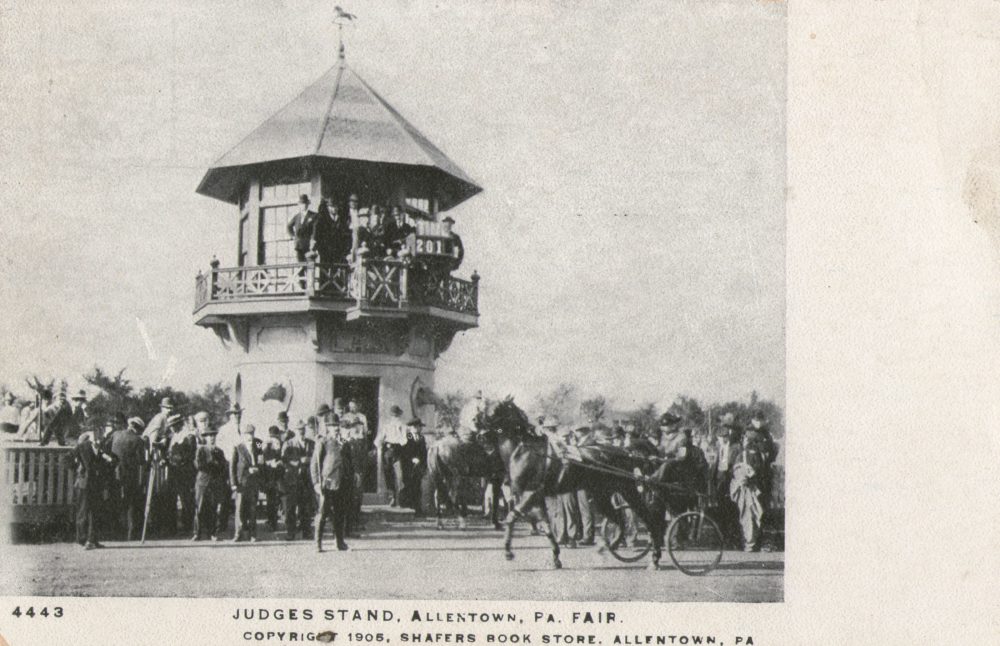 The Lehigh County Agricultural Society held the first fair from October 6 to October 8, 1852, on Livingston’s Lawn, a 5-acre (20,000 m2) plot located east of Fourth Street, between Walnut and Union Streets, in Allentown. The initial fair was so successful that in 1853 the Society undertook the purchase of a larger plot of land, north of Liberty Street and between Fifth and Sixth Streets, on which ticket offices and a two-story exhibition hall were built.
…
Throughout the 1870s and 1880s, the popularity of the Allentown Fair continued to grow. However, increased attendance led to dissatisfaction regarding the fairground’s size, facilities, short race track and small grandstand. In 1889, the Lehigh County Agricultural Society purchased a plot of land on Seventeenth Street, between Chew and Liberty Streets, to serve as the new fairgrounds.One of the primary features of the new location was a new half-mile race track, with grandstands capable of seating 2,500.
…
From its earliest days, horse racing was a popular event at the Allentown Fair. In 1902, the fair’s half-mile track was regarded as “one of the finest in the country.” In 1905, racehorse Dan Patch set a record of 2:01 on the half-mile track. In 1908, a new grandstand was built at the Allentown Fairgrounds that increased seating capacity from 2,500 to 10,000. As of 2009, this structure remains in use as the Fairgrounds’ grandstand.
Wikipedia 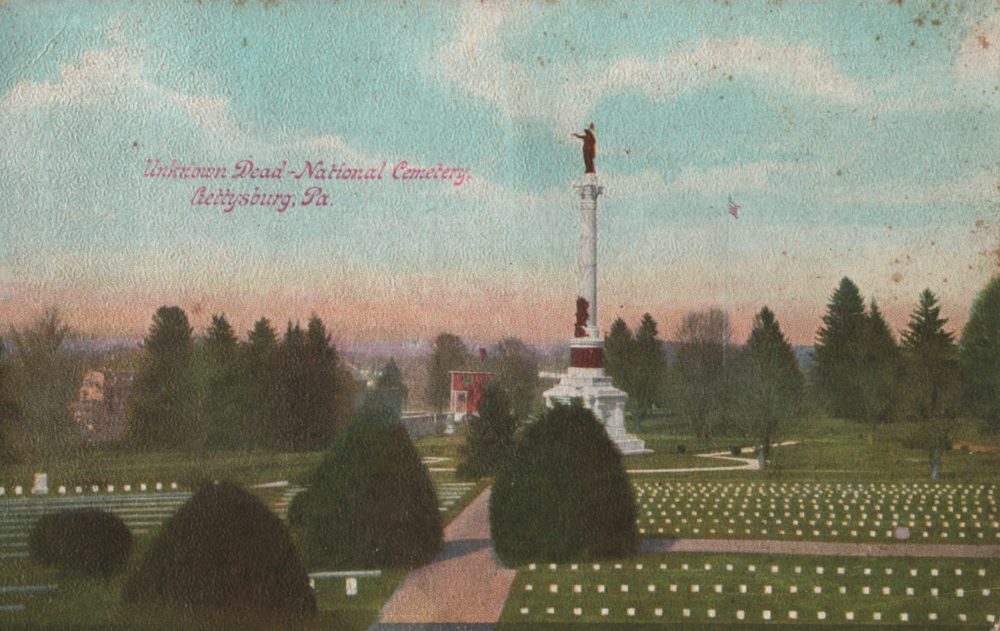 On back:
UNKNOWN DEAD, NATIONAL CEMETERY.–One of the most pathetic sights of a trip over the Gettysburg field is the section in the National Cemetery set apart for the unknown. There are 979 that are totally unknown as to name, state or organization. Small markers of marble, as are shown to the right of the illustration, stand at each grave and are simply numbered. To the left is a section of the known dead, where substantial granite slabs serve as headstones. The handsome New York State monument is seen near the center. 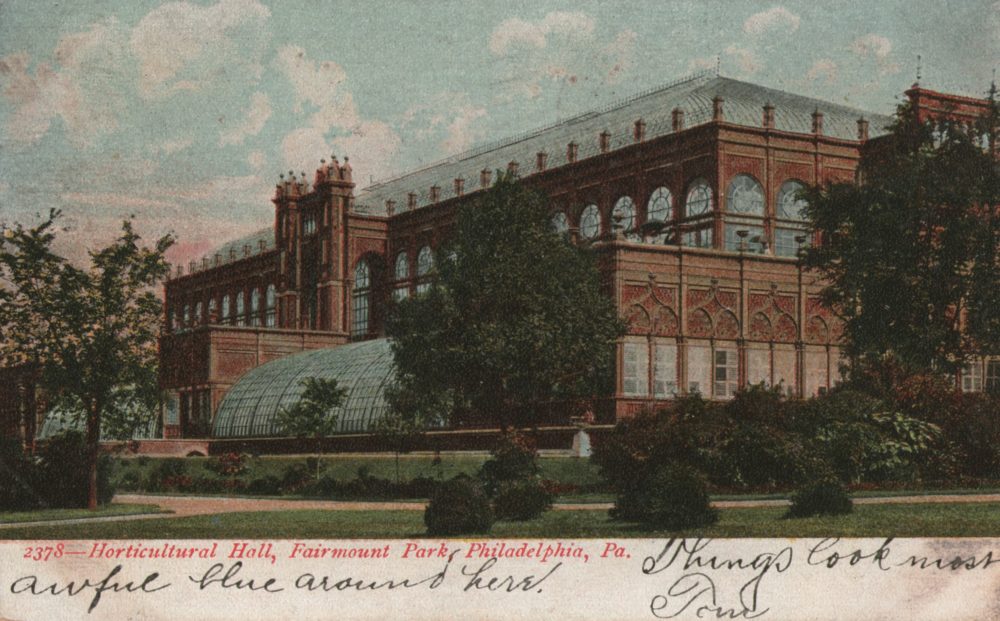 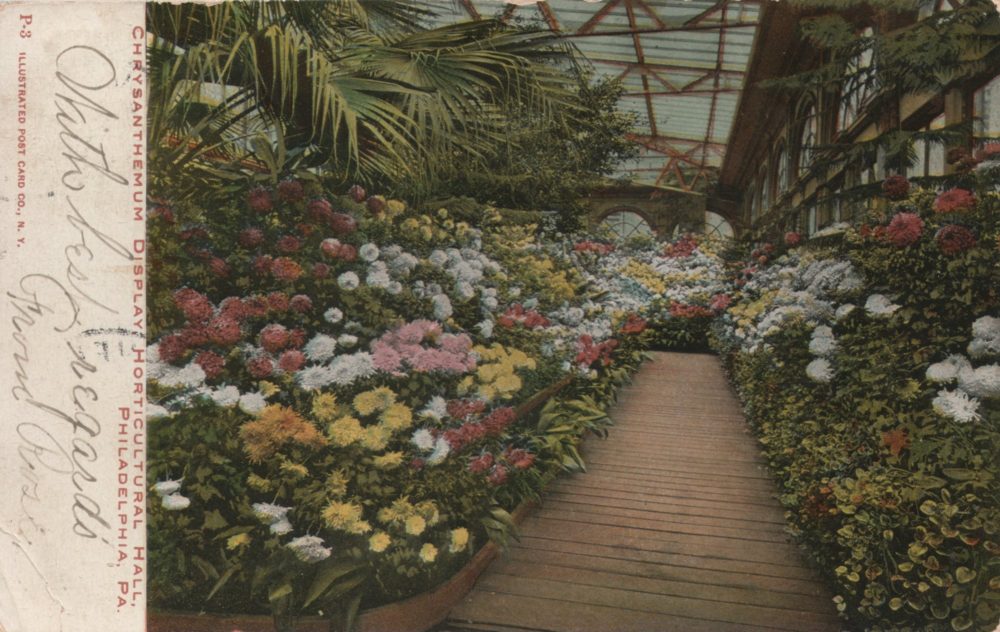 The Horticultural Hall was built in 1876 for the Centennial International Exhibition and demolished in 1954. In 1976 the Fairmount Park Horticultural Center was built on the same site.