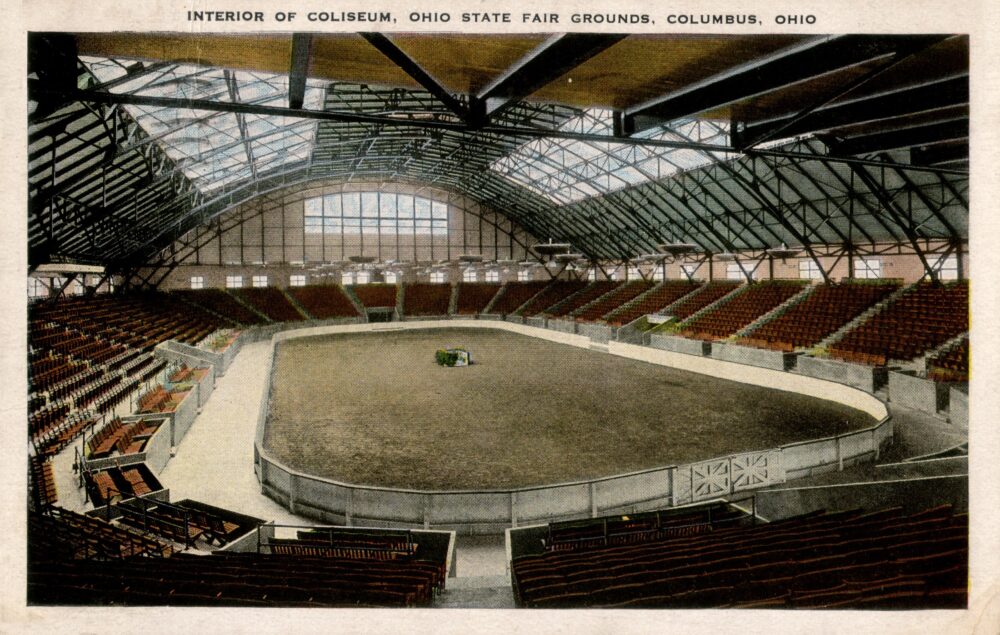 The Ohio State Fair is one of the largest state fairs in the United States, held in Columbus, Ohio during late July through early August.
…
The first Ohio State Fair was planned for September 1849, but an outbreak of Asiatic cholera forced cancellation of those plans. . . . Camp Washington, Cincinnati (two miles north of downtown Cincinnati, Ohio) was the site for the first Ohio State Fair, October 2–4, 1850. The site was described as 8–10 acres with grassy slopes, shade trees, and numerous tents. The grounds were enclosed by a 10-foot (3.0 m)-high board fence. Cattle were tethered to a railing along the carriage road. . . . From 1874 until 1885, the site of Columbus’ Franklin Park served as home to the Ohio State Fair. Finally, in 1886, the Fair moved to its current location to what is currently called the Ohio Expo Center and State Fairgrounds. The main entrance to the site was at the southwest corner of the grounds along Woodard Avenue.
Wikipedia.

In 1886, what is now known as the Ohio Expo Center became the permanent home of the Ohio State Fair. Years of planning and the acquisition of more than 100 acres of beautiful land adjacent to a major railroad intersection in Columbus culminated on August 30, 1886 when the 37th Ohio State Fair opened its gates. The grounds was comprised of a half-mile track and 5,000-seat grandstand, a magnificent main exhibition building, the Power Hall to hold machinery, several small lakes covering approximately three and a half acres, and dozens of barns designed to hold 448 horses, 420 head of cattle, 400 sheep and 450 hogs.
Ohio Expo Center & State Fair

The Taft Coliseum is a 5,003-permanent seat multi-purpose arena located at the Ohio Expo Center and State Fairgrounds in Columbus, Ohio. It opened in 1918 and is nicknamed “The Barn”. The facility hosted the 1929 NCAA Wrestling Championships.

The Coliseum has become a legendary and traditional high school basketball venue. It hosted OHSAA central district and regional playoffs in boys’ High School basketball until 2013, when the Central District Athletic Board opted to move games to Ohio Dominican University. During each fall and winter the Coliseum is also home to CAHA youth hockey. It was also once home to the Ohio State University men’s basketball team, Columbus Horizon CBA basketball team, Columbus Thunderbolts Arena Football League team, and the Columbus Stars and Columbus Chill ice hockey teams.
Wikipedia.

A natural home for major sporting events, concerts, consumer shows, horse shows, truck and tractor pulls – the circus! Depending on your needs, there’s seating for up to 7,000 in color-coded sections. And the facility is designed to make your event successful in every detail. Arena size: 225′ x 112′, and 65′ high at its peak.
Ohio Expo Center & State Fair (has link to virtual tour) 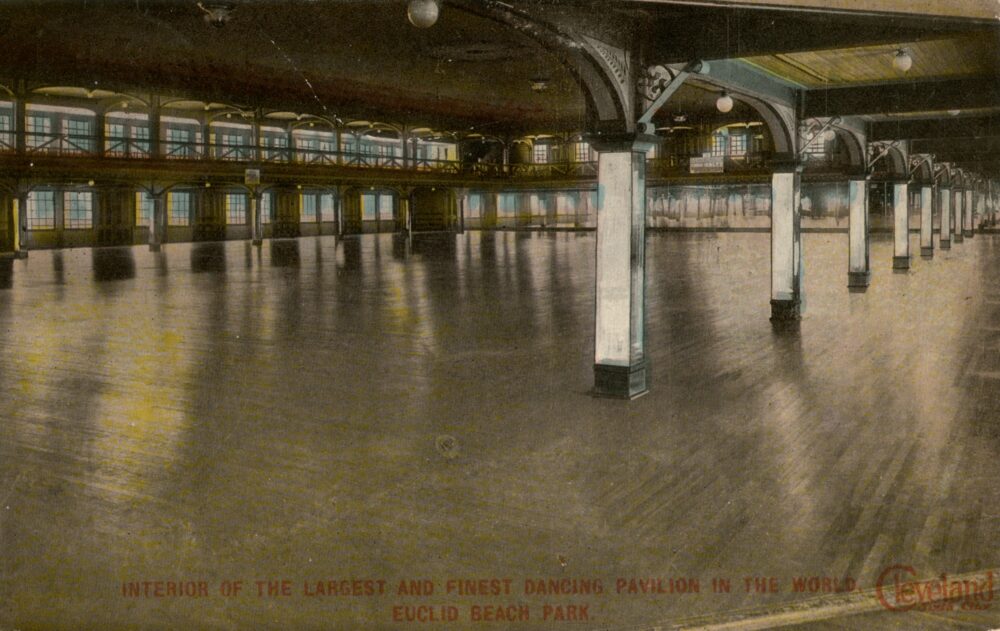 In 1895, five Cleveland businessmen opened Euclid Beach Park. Located on the southern shore of Lake Erie, on the east side of Cleveland, this parcel of land would become a magical place that was more than just an amusement park-it was an institution of the community. However, in 1900, “the Beach” faced financial collapse under the original owners. After being rescued by the Humphrey family, Euclid Beach began its ascendancy in the 1901 season.
Euclid Beach Park

Euclid Beach Park was built abutting a beach on Lake Erie, which was part of the attraction, and, for a time, a principal part of the Park’s attraction. An early addition to the park was its dance hall. After the Humphreys acquired the park, many more attractions were made part of Euclid Beach. . . .Many structures still standing on the Euclid Beach site after its closing, including the famous dance hall, were destroyed in a series of arson fires.
Wikipedia.

1895 – Euclid Beach Park opens. The Euclid Beach Park Company, owners of the park, had erected a fence surrounding the property, located eight miles east of Cleveland on the southern shore of Lake Erie. Admission was charged for patrons to enjoy a beer garden, games of chance, and a few mechanical amusement rides. The five original structures were: The Pier, German Village, Theater, Dance Pavilion, and Bath House.
Euclid Beach Park