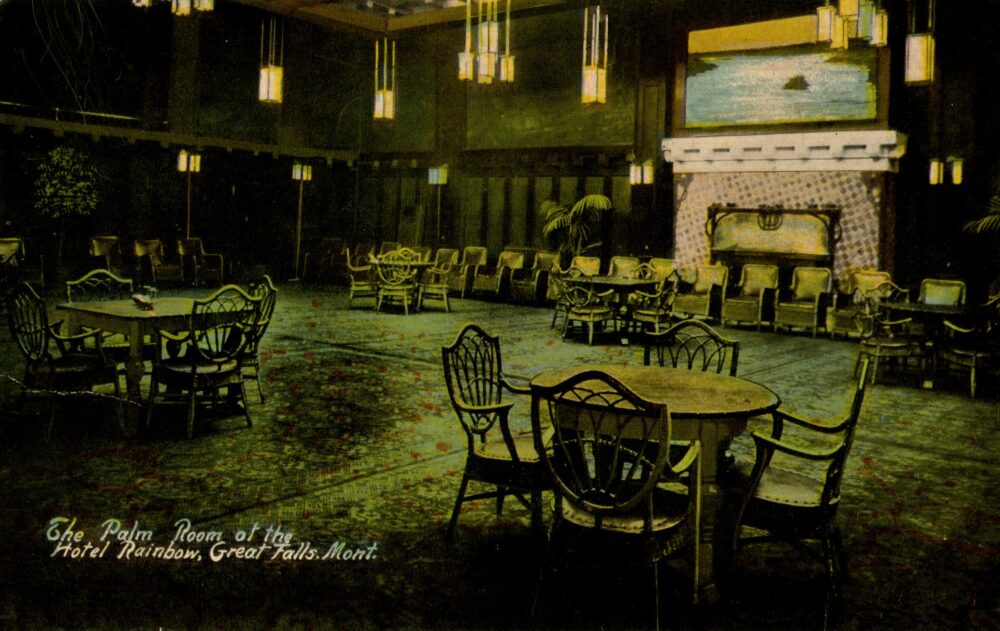 The Palm Room at the Hotel Rainbow, Great Falls, Mont.
On back:
This beautiful room must be seen to be appreciated. The management had the Palm Room built on the ground floor.
Postmarked 1913
Publisher: Chas. E. Morris Co., Green Falls

Architects George Shanley and John Kent designed the 1911 Rainbow Hotel for the Great Falls Townsite Company. The Townsite Company’s board included two of the most powerful men in America: Anaconda Company president John D. Ryan and Great Northern Railway president James J. Hill. The five-story hotel expressed their belief in Great Falls’ future—as an industrial center and hub for a large, prosperous agricultural district. As Ryan explained, they did not design the Rainbow for Great Falls as it existed, but for the much larger city they expected it to become. Decorated with terra cotta, the luxurious brick building cost $400,000 to construct and furnish, making it the most expensive establishment in the state. The hotel boasted a café, buffet, banquet hall, sample rooms, and 150 sleeping rooms, 120 of which connected to their own bathrooms. Finished in white marble, ivory, and copper, the lobby exuded elegance. So, too, did the Palm Room, which the Tribune complimented as “the most pretentious public room in a hotel between the Twin Cities and the Pacific coast.”
The Montana National Register Sign Program 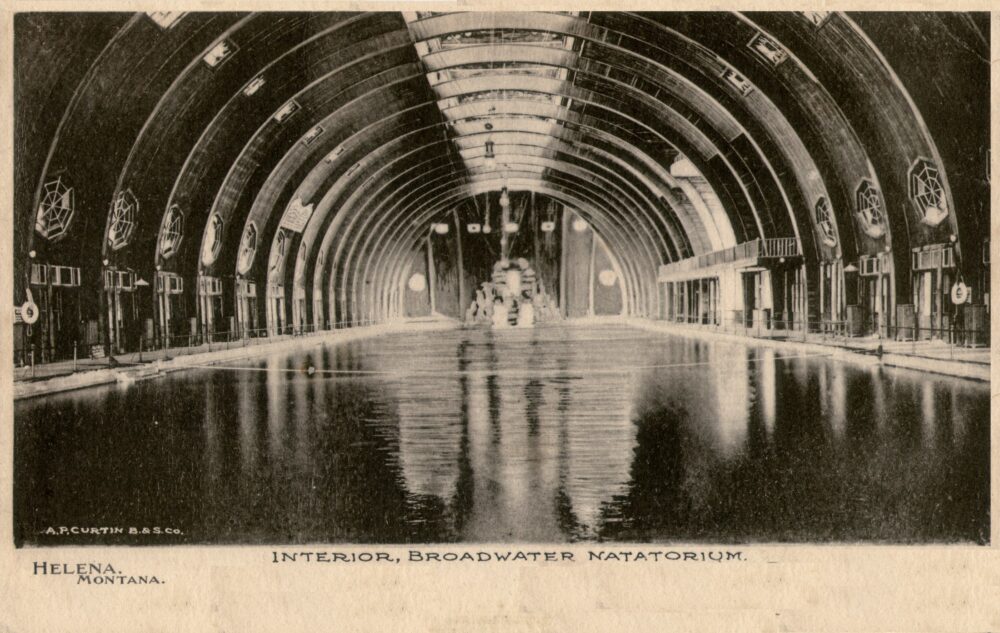 A natatorium (plural: natatoriums or natatoria, also called swimming hall) is a building containing a swimming pool. The word natatorium was borrowed from Late Latin, transitioning around the 1880s. The word was originally constructed from the Latin for “to swim” (natā(re)) and “place” (tōrium). In Latin, a cella natatoria was a swimming pool in its own building, although it is sometimes also used to refer to any indoor pool even if not housed in a dedicated building (e.g., a pool in a school or a fitness club). A natatorium will usually also house locker rooms, and perhaps allied activities, such as a diving well or facilities for water polo.
Wikipedia.

As Helena grew in the late 1880s, many of the spectacular homes and buildings were created. The grandest of them all was the Broadwater Natatorium, built in 1889 by the colonel. After dedicating his life to making Helena a thriving city with the development of Montana’s freight industry, this visionary built an elegant and lavish grand resort unlike any other in the state. The Broadwater Hotel and Natatorium stood as a symbol of Helena’s wealth and Montana’s progressiveness. Built on and around the Ten-mile Hot Springs with an investment of $500,000, these structures were masterfully constructed in the Moorish Spanish architectural style. The all-over effect was characterized by its massive size, complex rooflines, towers, domes, stained-glass windows and rows of high windows called clerestories. Its plunge featured a forty-foot high mass of granite boulders, toboggan slides, observation decks, and waterfalls. A rectangular nave covered the plunge, which had a hot spring in it coming right from the ground.

The swimming pool was 300 feet long and 100 feet wide. Colorful tiles covered the interior walls and floor to create a distinctly decorative and romantic feeling. The spacious hotel was elegantly furnished and featured modern amenities, including steam heat, electric lights, hot and cold water in nearly every room, and modern bath departments. The grounds were lush with beautiful lawns, flowerbeds, walks, fountains, and extensive landscaping. When the Broadwater Natatorium premiered in August 1889, it opened its doors to 180 guests and was the largest natural hot water plunge in the world. It was undoubtedly the most important example of this Moorish style of architecture in the Northwest. By drawing people from all over the world, it rivaled other nationally known spas at the time.
Treasure State Lifestyles Montana

The hot springs was developed first in 1865 as a bathhouse, a respite for miners digging in Last Chance Gulch. In 1889, the year of statehood, Charles Broadwater built the ornate Broadwater Hotel and Natatorium, which featured the world’s largest indoor pool. Broadwater died and his resort floundered and failed, the pool damaged in the 1935 earthquakes, and the hotel closed forever in 1941.
Great Falls Tribune

The natatorium was the most important example of Moorish architecture in the Northwest. It housed the largest indoor “plunge” in the world. A rectangular nave covered the 300′ x 100′ pool. The hot-spring water for the complex was delivered via redwood pipes from the source 1.5 miles to the west. Over one million gallons per day of hot and cold mountain spring water flowed through the system. The pool had a maximum depth of 12′.
…
The insurmountable problem caused by the earthquakes was the collapse of the thermal vent which provided hot spring water for the pool. Attempts were made to keep the pool filled by transferring hot water from the hotel boilers. Then, they simply tried to get by with using less water, as sen in the photo above. But it was all to no avail, and the natatorium was finally closed. The Broadwater acreage was purchased by Norman Rogers in November of 1945. He announced plans to renovate and reopen the resort, but this was never done. In July of 1946, Rogers threaded thick steel cables through the windows of the natatorium, hooked them to a bulldozer, and began pulling down the historic structure. “She’s still stubborn”, Rogers was quoted as saying as the great building shuddered. There were rumors that the timbers and cedar paneling were then sold for firewood.
Helena As She Was (more pictures)