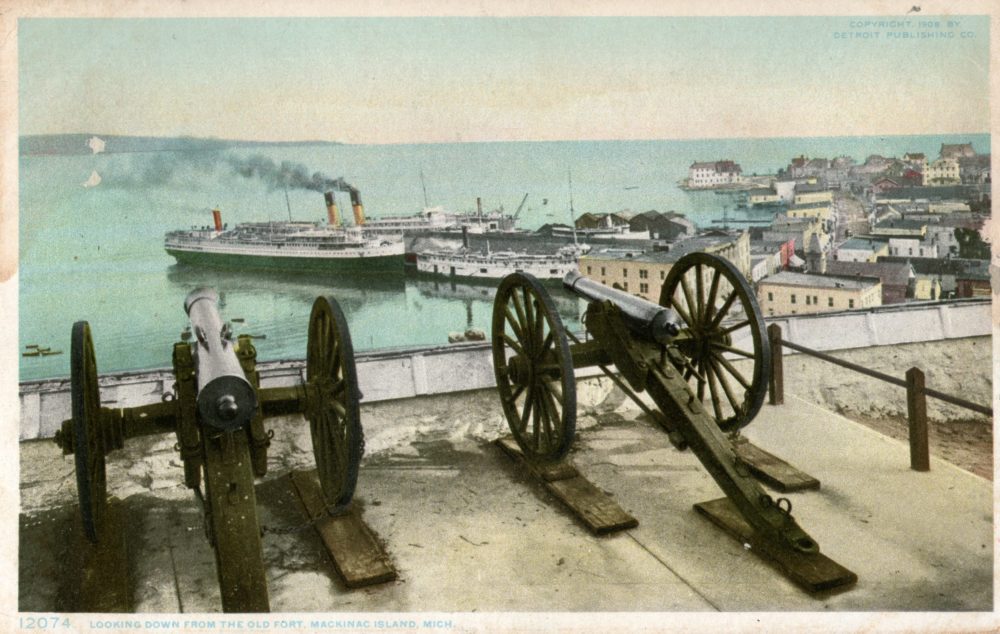 Fort Mackinac on Mackinac Island, Michigan was built by the British Army under the direction of Patrick Sinclair during the American Revolutionary War. Located on a bluff 150 feet above Mackinac Island Harbor, it replaced Fort Michilimackinac which had wooden palisades and was located on the shore of present day Mackinaw City. The Officers Stone Quarters, started in 1780 at Fort Mackinac, is the oldest building in the State of Michigan.
Fort Mackinac was turned over to the United States in 1796. But the fort and control of the Straits of Mackinac were recaptured without a battle during the War of 1812. British forces in Canada learned of the start of the war before the Americans and surprised the garrison with a much superior force of soldiers, European civilians and Native Americans on July 17, 1812. American forces attempted to recover the fort in 1814, but were defeated and also lost two sailing vessels used to blockade the harbor. Following the end of the war, Fort Mackinac was returned to the United States.
Straits of Mackinac & Mackinac Bridge: The Mighty Mac (also photos of island in 1918).

Fort Mackinac was founded during the American Revolution. Believing Fort Michilimackinac at what is now Mackinaw City was too vulnerable to American attack, the British moved the fort to Mackinac Island in 1780. Americans took control in 1796. In July 1812, in the first land engagement of the War of 1812 in the United States, the British captured the fort. In a bloody battle in 1814 the Americans attempted but failed to retake the fort. It was returned to the United States after the war. The fort remained active until 1895. During these years Mackinac Island was transformed from a center of the fur trade into a major summer resort. The stone ramparts, the south sally port and the Officer’s Stone Quarters are all part of the original fort built over 225 years ago. The other buildings in the fort are of more recent origin, dating from the late 1790s to 1885.
Mackinac State Historic Parks

Text and images below from “A lake tour to picturesque Mackinac via the D. & C”, Detroit and Cleveland Steam Navigation Co., 1890