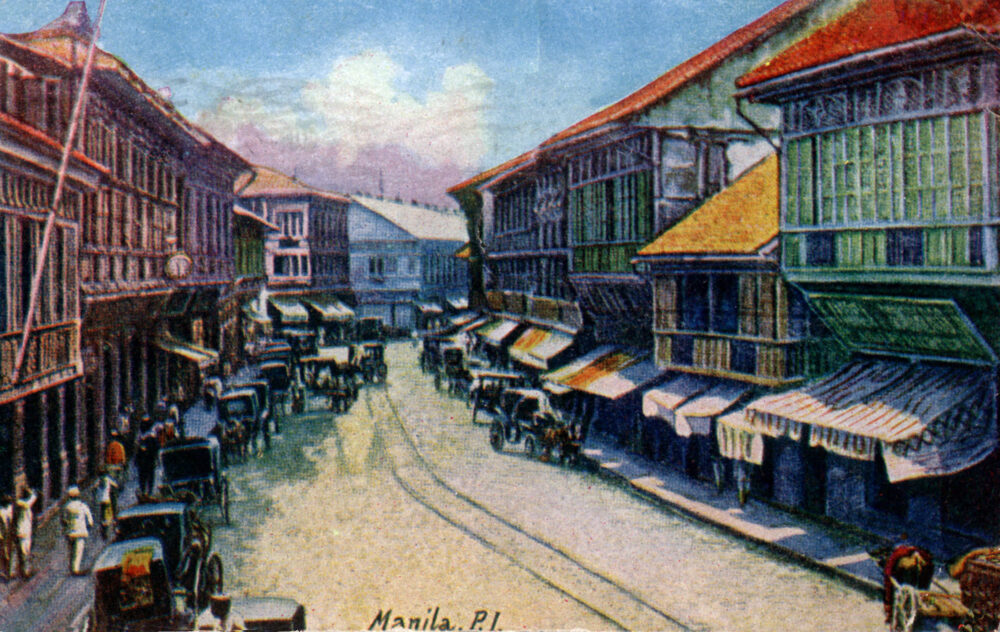 Manila, P.I.
On back:
MANILA, PHILIPINE ISLANDS
Escolta is the main street of Binondo, or new Manila, and is a well-paved thoroughfare, lighted by electricity. Large dry goods and other retail stores line its sides and throngs of pedestrians, market women, carts and carriages, add to its picturesqueness.
Postmarked 1909

One of the oldest streets in Manila, Escolta was created in 1594. Its name was derived from the Spanish word escoltar, meaning “to escort”. In Walter Robb’s essay Main Street, he states, “The gates of the walled city were closed at sunset, when curfew rang from the towers of all its churches; they were not opened again until dawn. Low, massive, stone-arched, typically medieval as you see them today, these gates were all furnished out with ponderous drawbridges lowered and raised by rude capstans, with strong porcullises of square iron bars which settled into place as the drawbridges rose upright.” After some individuals went missing “along the sandy path to the bridge,” Robb continues, a delegation petitioned the governor to station a detachment of halberdiers “along the path as a guard until after the city gates were closed.” “The governor assented, detailing a grizzled officer to arrange the escort, the escolta, in such a manner as to protect the path for a period of six months; and from this the winding path by the riverside got its name, la escolta, the escort, long before it was widened to the dignity of a street.”

Escolta was known for its concentration of immigrant merchants, mainly from Fujian, China, who came to make their fortune during the Manila-Acapulco Galleon trade. The street was lined with shops and boutiques selling imported goods from China, Europe and elsewhere in Latin America that arrived in the nearby port of San Nicolas. By the late 19th century, Escolta flourished into a fashionable business district hosting the city’s tallest buildings as well as the Manila Stock Exchange. The shops were replaced by modern department stores and an electric tram line known as tranvia plied the street. Escolta served as the city’s primary commercial district until its decline in the 1960s when the center of business gradually shifted to Makati.
Wikipedia.

Welcome to Calle de la Escolta—definitely the main haunt of the fashionable set in the early 20th century. Weekends have become much more exciting with many new establishments embellishing the avenue. Trendy business and shopping spots are opening here and there, thanks to American investors setting up shop. . . . The Salon de Pertierra, established by the Spaniard it was named after, was the first cinema in the Philippines, and brought Manileños their first silent foreign films. It would later be overshadowed by more modern movie theaters such as the Capitol and Lyric Theaters in the mid-30s. Save for the calesas on almost every street corner and a few buildings showcasing the original architecture retained from the Spanish period, it would have been easy to forget Escolta was in the Philippines. The heavily Westernized strip took a page from the streets of modernized America. The horse-drawn tranvia resembled the tourist trams of San Francisco, while the signage could easily be likened to the lit-up letters on New York’s Broadway.
Esquire: The Glory Days of Escolta, Manila’s ‘Queen of the Streets

Escolta Street in Binondo, Manila has a long history of being the business and cultural hub of the Philippines. It started all the way back from the late 16th century as it became the concentration of immigrant merchants, mainly from Fujian, China during the Manila-Acapulco Galleon Trade. Eventually, Binondo, especially the Calle Escolta, its main thoroughfare, evolved into a “melting pot” of people and cultures, where Chinese apothecaries stood alongside British and German drugstores, and also where Hispanic-led companies founded their headquarters there in the 1800’s. It flourished through the centuries from its birth and became the country’s premier central business, art, entertainment and lifestyle district at the turn of the 20th century up to the 1960’s
Escolta 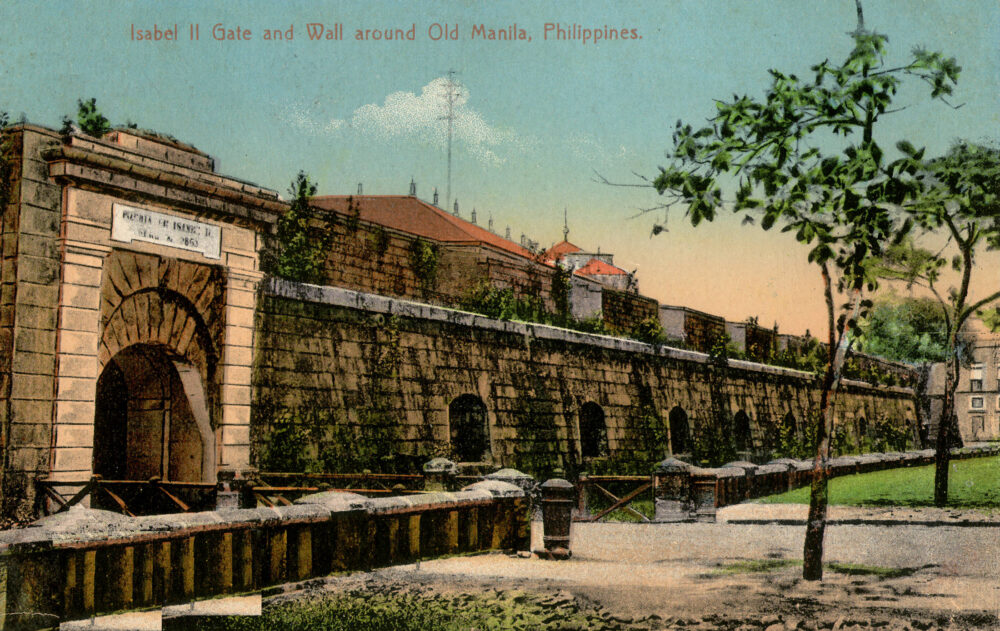 Construction of the Spanish walled city began under the orders of the Spanish imperial government in the late 16th century to protect the city from foreign invasions, replacing the old prehispanic settlement of Maynila along the shores of the Manila Bay, by the entrance to the Pasig River. . . . The outline of the defensive wall of Intramuros is irregular in shape, following the contours of Manila Bay and the curvature of the Pasig River. The Muralla walls covered an area of 64 hectares (160 acres) of land, surrounded by 8 feet (2.4 m) thick stones and high walls that rise to 22 feet (6.7 m). The walls stretched to an estimated 3-5 kilometers in length. An inner moat (foso) surrounds the perimeter of the wall and an outer moat (contrafoso) surrounds the walls that face the city. . . . Before the American Era, entrance to the city was through eight gates or Puertas namely (clockwise, from Fort Santiago) Puerta Almacenes, Puerta de la Aduana, Puerta de Santo Domingo, Puerta Isabel II, Puerta del Parian, Puerta Real, Puerta Sta. Lucia, and Puerta del Postigo.
Wikipedia.

The Spanish began building Intramuros in 1521 on 0.67 square kilometres of land strategically chosen between Manila Bay and the Pasig River. It was designed as a tight grid to keep its streets functional but contained. Its purpose? To be the Spaniard’s political and military base in Asia. Grand administrative establishments, as well as religious and educational institutions, thrived within Intramuros, where only the nation’s most powerful clans (mostly from Spanish descent) could settle. Horse-drawn carts (kalesa) rattled through the city’s numerous gates to bring residents to various establishments: Plaza Mayor (the main city square now called Plaza de Roma), the City Hall (Ayuntamiento), Plaza Santo Tomas (where the original University of Sto. Tomas was built), a printing press, churches and Spanish-style colonial homes where residents entertained. Due to constant attacks from foreign invaders, coupled with natural and man-made disasters, defensive features surrounded the city, including two moats, cannons and fortified walls, from bulwarks to ravelins. Hence, the name ‘Intramuros’: a city within the walls.
The Culture Trip

The last gate to be built in Intramuros was opened in 1861 as a solution to the heavy pedestrian traffic outside Parian Gate to the Puente de España (Bridge of Spain) and Binondo. In front of it is the Queen Isabel II statue honoring the then-reigning Spanish monarch. The gate became part of the route of the tranvía (streetcar) system in 19th century Manila. It was damaged during the Battle of Manila in 1945 and was restored in 1966.
Wikipedia. 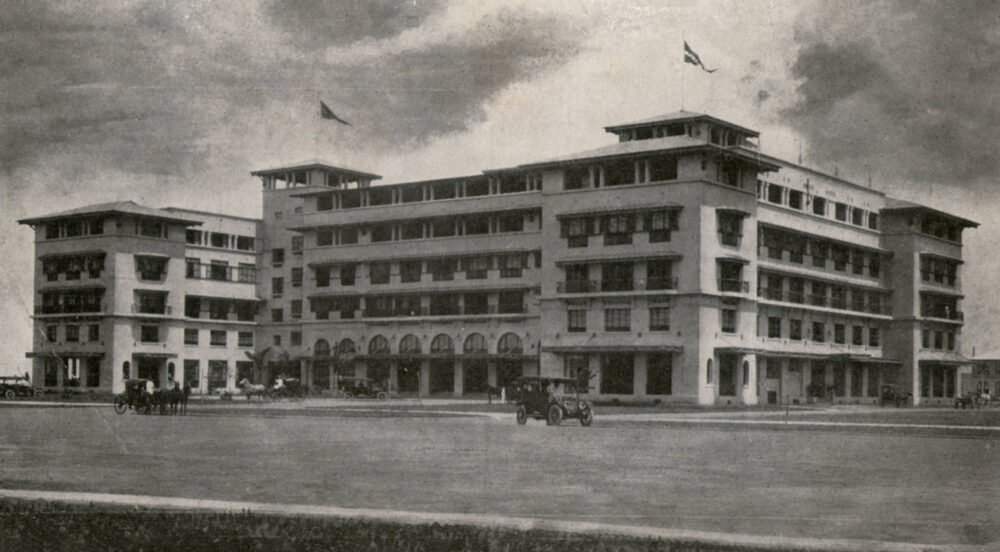 The Manila Hotel is a 550-room, historic five-star hotel located along Manila Bay in Manila, Philippines. The hotel is the oldest premiere hotel in the Philippines built in 1909 to rival Malacañang Palace, the official residence of the President of the Philippines and was opened on the commemoration of American Independence on July 4, 1912. . . When the United States took over the Philippine Islands from the Spanish in 1898 after the Spanish–American War, President William McKinley began Americanizing the former Spanish colony. In 1900 he appointed William Howard Taft to head the Philippine Commission to evaluate the needs of the new territory. Taft, who later became the Philippines’ first civilian Governor-General, decided that Manila, the capital, should be a planned town.
Wikipedia.

He hired Architect Daniel Hudson Burnham who drafted a wide and long tree-lined boulevard that would begin at the park where the end of the bay would be dominated by a magnificent hotel. To execute Burnham’s plans, Taft hired William E. Parsons, a New York city architect, who envisioned an impressive, comfortable hotel which he patterned along the lines of Californian mission style architecture. . . . On July 4, 1912, The Manila Hotel first opened its doors to the public, as announced on the front page of what was then known as Manila Daily Bulletin. A sprawling property located in the heart of Manila, the country’s first ever five-star hotel became the address of prominence visited by the most illustrious of guests.
Manila Hotel

There were large tobacco factories right in the city of Manila, but I found so much else of interest and delight in the Philippines that I quite forgot that such things as cigar factories existed! I received my first introduction to Manila hats, however, on the first day of my stay, for at a delightful stall in the Manila Hotel there were two or three samples of ‘target hats’ on view, and after seeing them, all of our party were seized with the same burning desire to purchase a Manila hat. This, we found, was quite an easy business, for at 10 o’clock each morning two Filippino hat-sellers invariably took up their position on the steps of the hotel and exhibited a big array of hats to tempt the purses and hearts of the tourists.
The Northern Herald, 22 August 1918

During World War II, the hotel was occupied by Japanese troops, and the Japanese flag was flown above the walls for the entirety of the war. During the Battle for the Liberation of Manila, the hotel was set on fire by the Japanese. The shell of the building survived the blaze and the structure was later reconstructed.
Wikipedia.