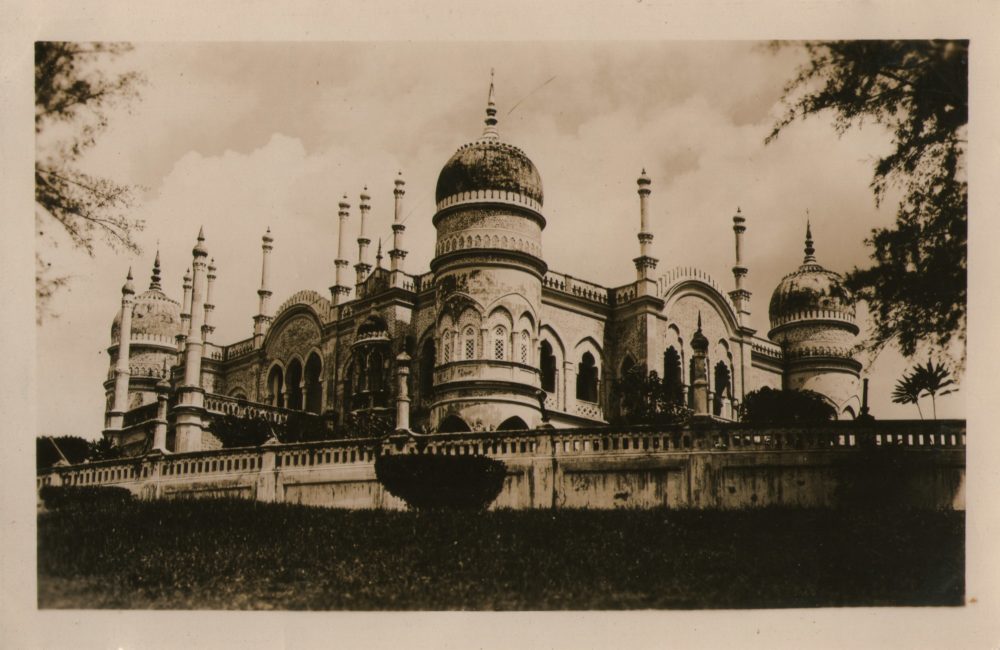 A photo printed as a postcard so no publisher details or caption
c.1940

Between 1903 and 1957 there existed an older palace on the same site [as the palace of the Sultan of Selangor], known as Istana Mahkota Puri. It was built in 1903 during the rule of Sultan Sir Alaeddin Sulaiman Shah, who was the fifth Sultan of Selangor, and the design closely resembles the Sultan Abdul Samad Building in Kuala Lumpur. The Sultan went on to live in the palace for 35 years until his death in 1938. In the 1950s it was briefly used as a student dorm for nearby schools. The palace was demolished in October 1957 and soon replaced by the present-day structure.
Wikipedia.

…taking the reign as Sultan Alaeddin Suleiman Shah, the grandson of Sultan Abdul Samad informed the State Council that he preferred for his seat to be in Klang instead of Jugra or Kuala Lumpur. . . Sultan Alaeddin found Klang’s fort too cramped for a palace site and the existing Malay graves there wasn’t much of a pull to him either. A 25-acre area along Langat Road was deemed suitable. With that site in mind, plans for Klang’s new palace was announced in the papers in October 1898. However, as you know, land matters are not always straight forward and so a new location had to be agreed upon. It was only by March 1899 that a final site was selected on a hill overlooking Klang’s recreation ground.
. . .
Records reveal that two design concepts were proposed by the team, one in a Mughal-Eclectic style reflecting the design of the New Government Office that Hubback and Row had worked on earlier. The other was in European style. Sultan Alaeddin selected the former, but his choice was met with slight resistance from the Secretary General, Henry Conway Belfield, as it was twice the allocated budget, sending Spooner’s team back to the drawing board to revise their design and estimates.
…
The Klang Istana was officially named as Istana Mahkota. Sultan Alaeddin was formally installed as the 5th Sultan of Selangor at the Istana in November 1903. Construction works at the palace however did not stop then. He had earlier in May 1903 insisted for a building extension, for which an additional $10,000 budget was approved.
Arthur Benison Hubback 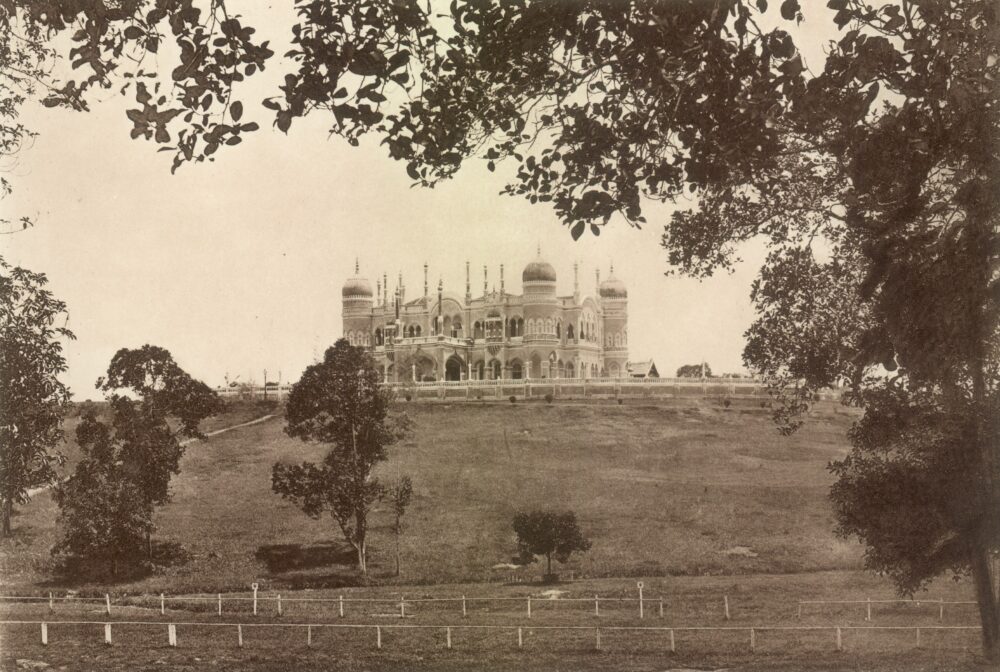 Palace of the sultan at Klang near Kuala Lumpur, c.1910 Wikimedia Commons

From behind the veil of the harem peered a curious face, a feminine face, as you might imagine! Strangers in the palace of the Sultan of Selangor are a novelty, and the lady was evidently as curious about us as we, I must admit, were about her. Was she one of the 72-year-old Sultan’s several wives? We wondered.

While the Kangaroo was at Port Swettenham it was my good fortune to be permitted to see the handsome palace of His Highness the Sultan of Selangor, a fine building set on the crest of a green sloped hill at Klang, five miles from Port Swettenham.

One can’t help feeling a little flattered as a handsome, bearded Sikh slopes his bayoneted rifle and salutes at the entrance to the palace. And the surprise of this martial courtesy is still on you as you cross the cool, fern laden verandahs and enter the throne room. Even a man cannot repress a gasp of wonder at this exhibition of Oriental color and pomp. Against a glittering background stands the Sultan’s throne, richly ornamented and brilliantly colorful. Flanking it are the seats for the Resident, the High Commissioner and other dignitaries, all their chairs being richly upholstered in a vivid gold satin. Standing on the marble floor, I glanced round this big, luxurious room, and it was then that my eye caught a shadow behind the veil that my smiling Malay guide informed me in his perfect English was the entrance to the harem. Theshadow took more definite shape, a feminine head peered round the edge of the veil. I almost winked.

The Sultan was not home that afternoon. From this beautiful room we looked through the dining hall (where the photos of the King and Queen of England are displayed on the walls), the sitting room, where the Sultan sits with his wives—-but not always all together-—and then strolled down the slope to see the finest mosque in all Malaya.
Mirror, 23 December 1933, p. 4

The Sultan, who succeeded his father, who died a few months ago, will be crowned In the old palace at his capital, Klang. The Government suggested that a new palace be built before the coronation, but this will be held up until the revenues of the State increase.
Truth, 4 December 1938, p. 21 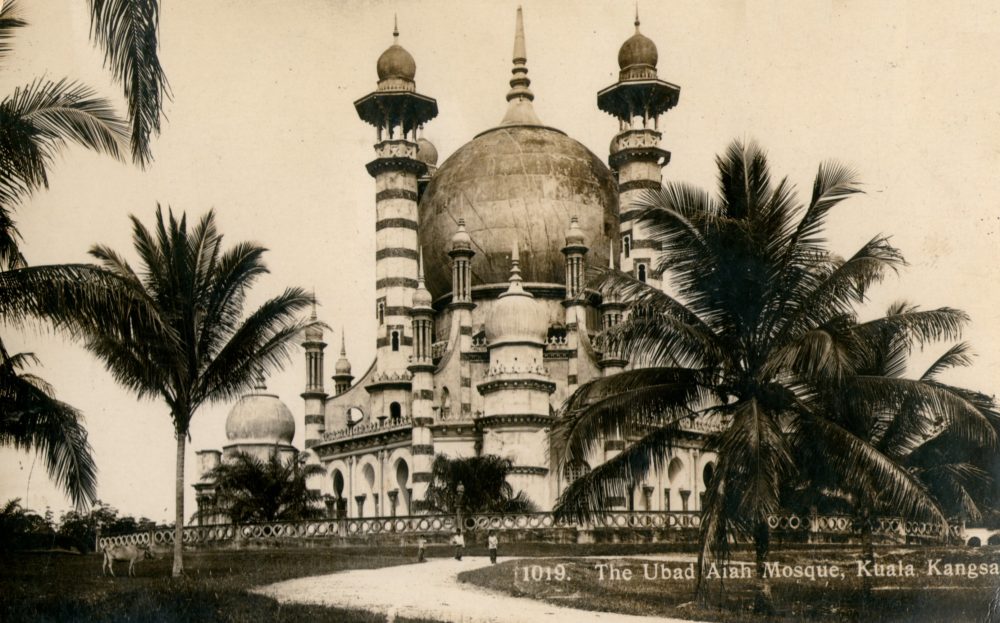 The most beautiful mosque in Perak is situated besides the Bukit Chandan Royal Mausoleum, Kuala Kangsar. The mosque was built at the royal command of Sultan Idris Murshidul Azam Shah, the 28th Sultan Perak (1887 – 1916) to fulfil his Royal Highness’ religious vow. Perak Government then instructed Colonel Huxley from the Public Services Office in Kuala Lumpur to design the plan for the mosque. The responsibility fell to Hubbeclk, a civil architect, and the building of the mosque was the responsibility of Caulfield who was Perak chief engineer at that time. On Friday, 26 September 1913, Sultan Idris Murshidul Azam Shah, set the foundation stone for the mosque. The building activity was interrupted for a few years due to the damage to the marbles caused by two elephants belonging to Sultan Idris and Raja Chulan.
The order of the marbles from Italy was interrupted caused by the World War I. In 1917, the most beautiful mosque in Perak was officially opened by Sultan Abdul Jalil Nasaruddin Shah, who replaced Sultan Idris who passed away in 1916. The cost of building the mosque at that time was estimated at RM200,000.
Kuala Kangsar Municipal Council

The mosque was built during the reign of the 28th Sultan of Perak, Sultan Idris Murshidul Adzam Shah I Ibni Almarhum Raja Bendahara Alang Iskandar Teja, who commission its construction as thanksgiving for his recovery from an illness that plagued him in his later years. The groundbreaking ceremony took place on 26 September 1913. The construction of the mosque was interrupted several times, once when two elephants belonging to the sultan’s and Raja Chulan fought, ran over and damaged the Italian marble tiles. The outbreak of the first world war also affected its construction. The mosque was finally completed in late 1917 at a total cost of $24,000 or RM200,000 – a considerable sum at that time. It was officially declared open by Sultan Abdul Jalil Karamtullah Shah Ibni Almarhum Sultan Idris Murshidul Adzam Shah I Rahmatullah, successor to Sultan Idris who had died during its construction.
Wikipedia.

The Ubudiah Mosque was the brainchild of the 28th Sultan of Perak, Sultan Idris Murshidul’adzam Shah (1887-1916). Legend has it that following his return from England in 1911 (His Highness went to England to witness the coronation of King George V), His Highness the Sultan fell ill. He chose to stay in Port Dickson for respite. Whilst convalescing in Port Dickson, he made a vow to build a mosque in Bukit Chandan, Kuala Kangsar, if he fully recuperated as thanksgiving. After his return to Kuala Kangsar when his health greatly improved, His Highness commanded Colonel Huxley of the Public Works Department, Kuala Lumpur, to design a mosque which he wanted to build.
Heritage Buildings of Malaysia 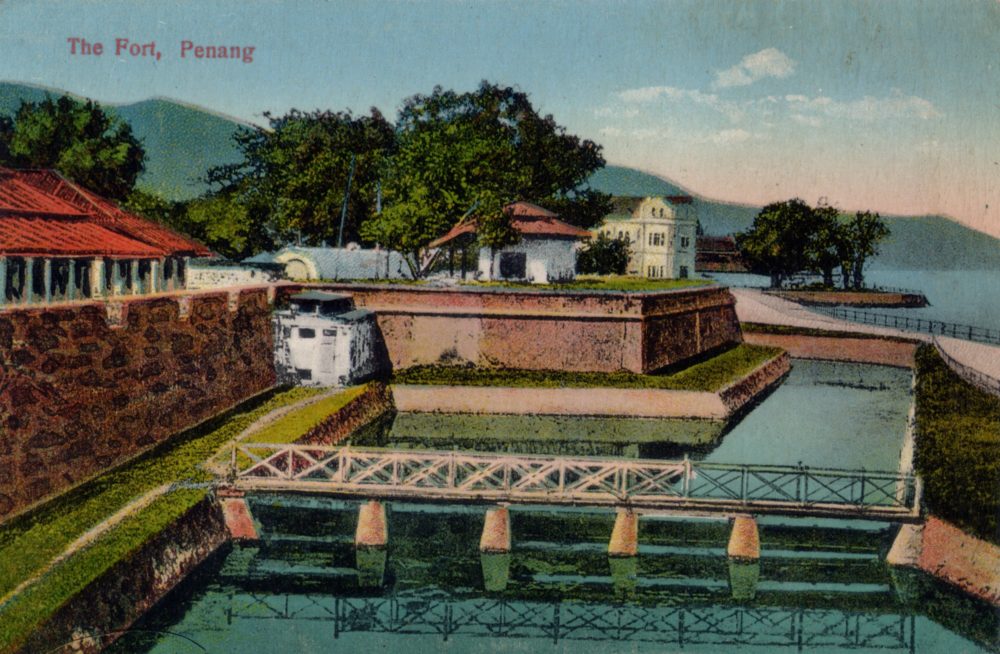 Fort Cornwallis is a bastion fort in George Town, Penang, Malaysia, built by the British East India Company in the late 18th century. Fort Cornwallis is the largest standing fort in Malaysia. The fort never engaged in combat during its operational history.
..
Captain Francis Light took possession of Penang Island from the Sultan of Kedah in 1786 and built the original fort. It was a nibong (Malay: palm trunk) stockade with no permanent structures, covering an area of 417.6 square feet (38.80 m2). The fort’s purpose was to protect Penang from pirates and Kedah. Light died in 1794. In 1804, after the outbreak of the Napoleonic Wars, and during Colonel R.T. Farquhar’s term as Governor of Penang, Indian convict labourers rebuilt the fort using brick and stone. Fort Cornwallis was completed in 1810, at the cost of $80,000, during Norman Macalister’s term as Governor of Penang. A moat 9 metres wide by 2 metres deep once surrounded the fort but it was filled in the 1920s due to a malaria outbreak in the area.

Even though the fort was originally built for the British military, its function, historically, was more administrative than defensive. For example, the judge of the Supreme Court of Penang, Sir Edmond Stanley, was first housed at Fort Cornwallis when the court opened on 31 May 1808. During the 1920s Sikh police of the Straits Settlements occupied the fort.
Wikipedia.

Fort Cornwallis was regularly criticised by naval and military experts who deemed it far too small, too weak and too low to be of any real defence to the island. Built on a sandy ground, cracks regularly appeared in its walls. The ditch or moat was constructed in 1805 and added a degree of extra defence but a glacis on the two land-facing sides of the fort was deemed ineffective. With barely enough room on one side for a suitable Esplanade (parade ground: today’s green space) and the town close by on the other there was no room for expansion.

Inside the fort were barracks to house artillery regiments and officers, storerooms for armaments, gunpowder, gun carriages, clothing and foodstuffs, as well as kitchens, toilets and even a cell to house military prisoners. Access was via bridges leading to the two gateways seen today. Over each gateway was a building which served as officers’ quarters. The majority of cannons mounted on the fort’s ramparts were 9 and 18-pounders. Even when firing blanks they shook the walls and threatened the structure.
Fort Cornwallis, Penang (official website)