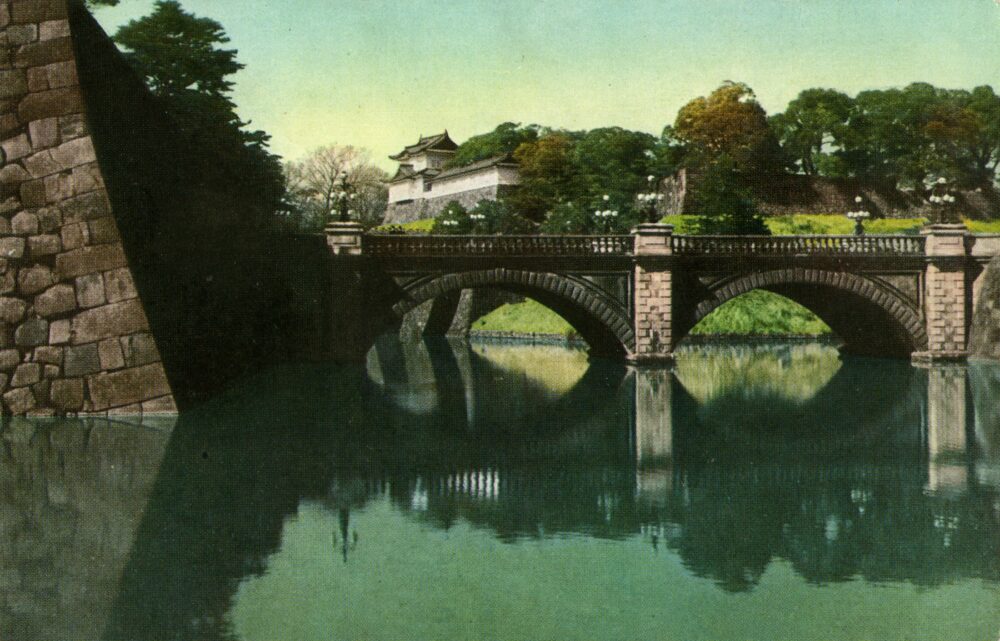 Edo Castle also had two bridges here, but the names were different. The stone bridge was a wooden bridge called 西之丸大手橋 nishi no maru ōtebashi “front bridge to the western compound” and the iron bridge was also a wooden bridge called 西之丸下乗橋 nishi no maru kejōbashi “dismount bridge to the western compound.” Nijubashi was actually the nickname of the kejōbashi (now the iron bridge), not the ōtebashi (now the stone bridge). The bridge was built in 1614 by the shōgun, Tokugawa Hidetada. The bridge had a secondary wooden support mechanism built underneath which made it a 2 level construction. Because of these two levels, it looked like there were two bridges. The nickname 二重橋 nijūbashi/futaebashi came to be used as it was quite a distinctive bridge.

When the imperial court moved into the castle in 1868 but the bridges remained. After the confiscation and destruction of the daimyō residences in Daimyō Alley and elsewhere, the old bridge and gate system was re-evaluated. The two bridges were chosen as the main entrances to Tokyo Castle (the Imperial Palace). The kejōbashi was torn down and replaced with an iron bridge in 1888. It was rebuilt again in 1964 to match the 新宮殿 Shin Kyūden the New Palace, which is the collection of shitty 60’s-looking buildings that litter the palace grounds.
Nijubashi – Tokyo’s Most Famous Bridge 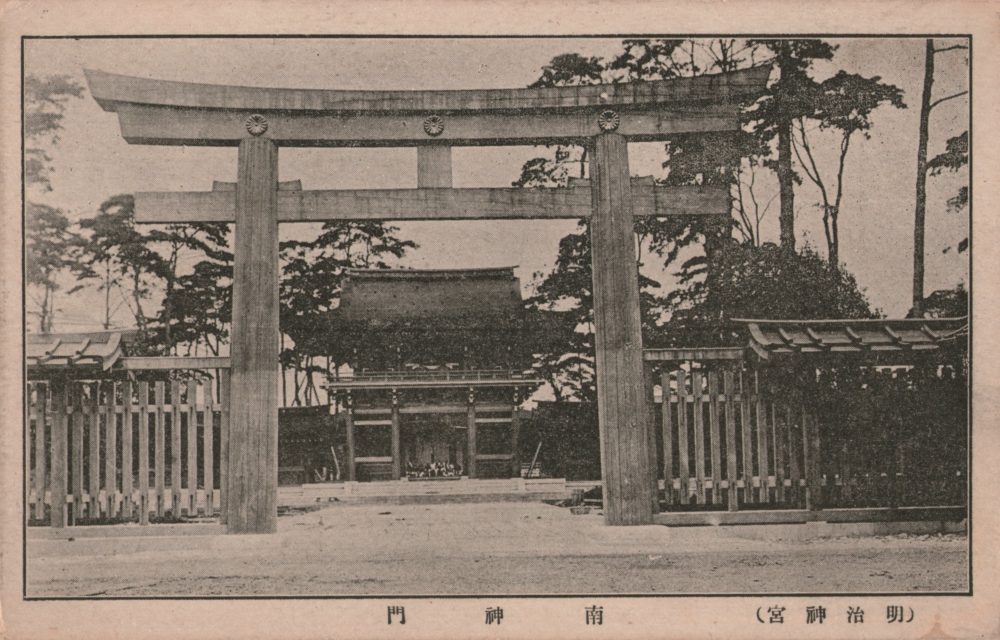 (That last part seems to be written backwards? I don’t know Japanese. My best guess is:)
South/Minami Gate (Meiji Jingu)

After the emperor’s death in 1912, the Japanese Diet passed a resolution to commemorate his role in the Meiji Restoration. An iris garden in an area of Tokyo where Emperor Meiji and Empress Shōken had been known to visit was chosen as the building’s location.

Construction began in 1915 under Itō Chūta, and the shrine was built in the traditional nagare-zukuri style, using primarily Japanese cypress and copper. The building of the shrine was a national project, mobilizing youth groups and other civic associations from throughout Japan, who contributed labor and funding. It was formally dedicated in 1920, completed in 1921, and its grounds officially finished by 1926.
…
The original building was destroyed during the Tokyo air raids of World War II.
Wikipedia