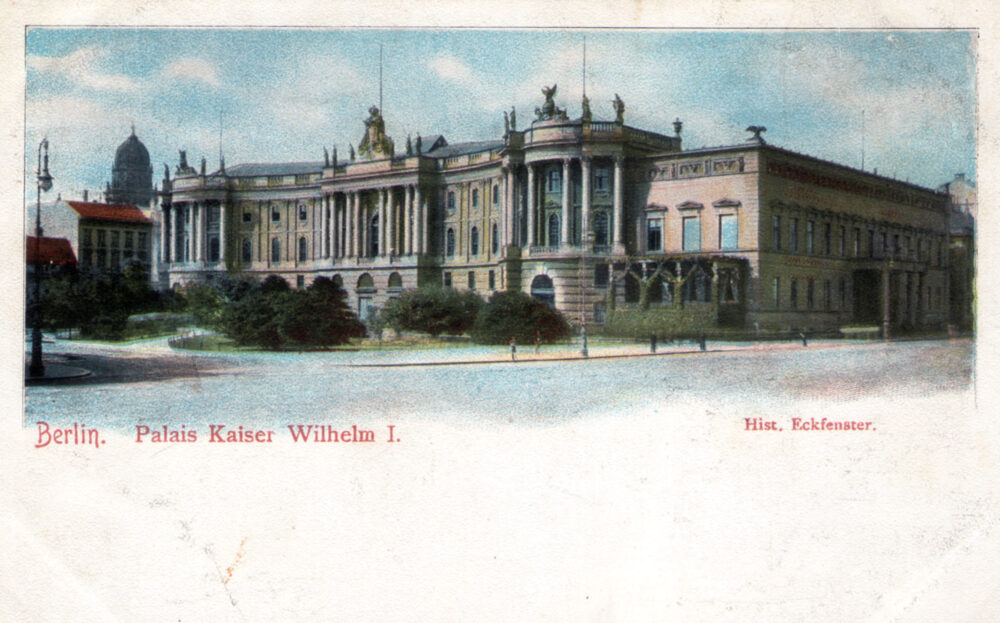 The Old Palace (German: Altes Palais), also called Kaiser Wilhelm Palace (Kaiser-Wilhelm-Palais), is a former Royal Prussian residence on Unter den Linden boulevard in Mitte, the historic heart and city center of Berlin. It was built between 1834 to 1837 by order of Prince William of Prussia, who later became German Emperor William I, according to plans by Carl Ferdinand Langhans in Neoclassical style. Damaged during the Allied bombing in World War II, the Old Palace was rebuilt from 1963 to 1964 as part of the Forum Fridericianum. . . . The Prussian crown prince Frederick William hired one of the most prominent architects of Germany, Karl Friedrich Schinkel, to design a memorial complex for Frederick the Great. However, after being disappointed with the expensive plans of Schinkel, he accepted the modest concept of the architect Carl Ferdinand Langhans in Neoclassical-style. As the construction of the palace was completed in 1837, the then crown prince William I began using the building as his residence until his death in 1888. The palace was built with a pergola, a mezzanine and a vestibule.
Wikipedia.

(Via Google Translate)
Langhans erected the building in the years 1834 to 1837 in the classical style. It has 13 window axes facing the street with a covered portico -like driveway surrounded by an eagle frieze. Eagles fly at the corners. A green pergola was added to the Opernplatz. Wilhelm’s living and working rooms were on the lower floor of the left part of the building, facing the street and a green inner courtyard at the back, while Augusta’s were on the upper floor, connected by an intimate spiral staircase. The vestibule was located in the central part, the representative staircase and the social rooms above. In the right part, which extended as a much longer side wing from Oranische Gasse to Behrenstraße, there were festival rooms, including the large circular dance hall. Towards Behrenstraße, around a second inner courtyard, were the service and living quarters of the staff, horse stables and a coach house . In everyday operation, the entrance on the narrow Oranische Gasse served as the main entrance and right of way. . . . During the imperial period , the palace developed into one of the most important sights in Berlin. Wilhelm always appeared at the “historic corner window” of his study on the ground floor to watch the guard procession Unter den Linden at the Neue Wache diagonally opposite.
Wikipedia. 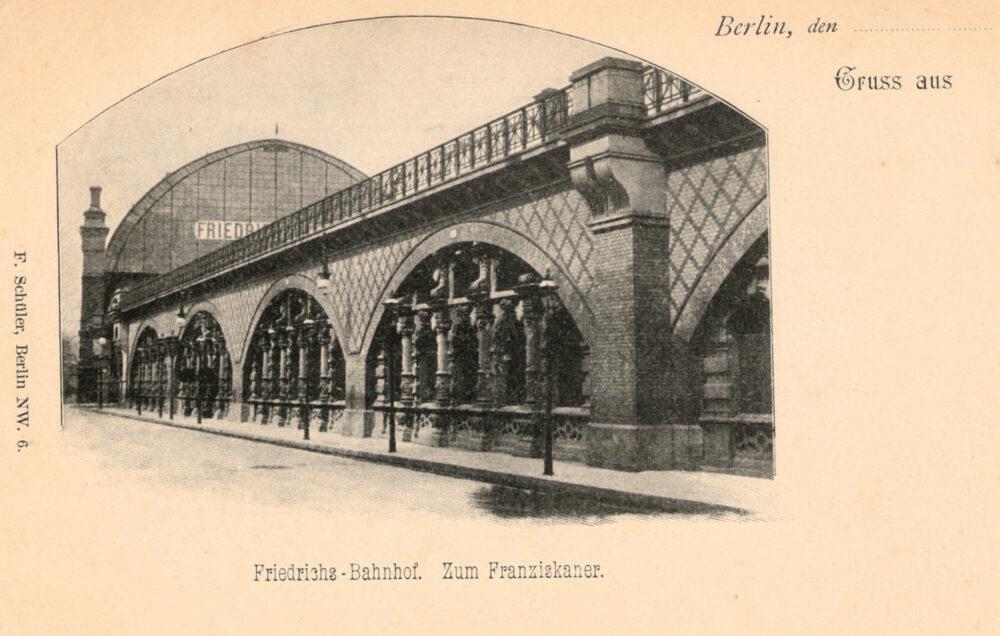 Berlin Friedrichstraße is a railway station in the German capital Berlin. It is located on the Friedrichstraße, a major north-south street in the Mitte district of Berlin, adjacent to the point where the street crosses the river Spree. . . In 1878, the first station was built after plans by Johannes Vollmer between the Friedrichstraße and the river Spree as part of the Berlin Stadtbahn construction. The architect was working on the neighbouring Hackescher Markt station at the same time. Just as the elevated viaduct the station is integrated into, the station rests on large arches built with masonry. The station had two platforms with two tracks each, covered by a large, curved train shed which rested on steel trusses of different length to cover the curvature of the viaduct underneath. The main entrance was on the northern side, the pick-up for horse carriages on the south side. Station opening was on 7 February 1882, as part of the ceremonial opening of the Berlin Stadtbahn. Long distance trains started on 15 May the same year.
Wikipedia.

So when the East Germans built the wall that sealed off West Berlin, they made sure to add metal and glass barriers to divide the platforms of Friedrichstrasse as well. The station became an international oddity, in that it was located entirely in East Berlin, but some of its train platforms and all of its underground services were only for West Berliners. Passengers would often have to make a border crossing when moving from one story of the building to the other. For the next 28 years, it was, effectively, a three-dimensional border, one drawn not between north and south or east and west, but between up and down.
Conde Nast Traveller

(Via Google Translate)
In 1882, the architects Kayser & Groszheim set up the restaurant complex “Zum Franziskaner” in the Stadtbahn arches no. 198-206 east of Friedrichstraße station at Georgenstraße 12 a/13. “This magnificent facility is at the same time the first artistically executed example of the gigantic pubs that have been appearing since the mid-1970s, known as ‘beer churches’ in Berlin folk jokes, in which mostly local beer was served. […] Drawn in the wildest forms of the German Renaissance The exterior architecture of the ‘Franziskaner’ refrains from any attempt to fit harmoniously into the massive and clumsy masonry of the Stadtbahn arches,
The “Zum Franziskaner” beer palace existed here until 1913, after which other establishments have operated at the site to this day.
Sammlung Online