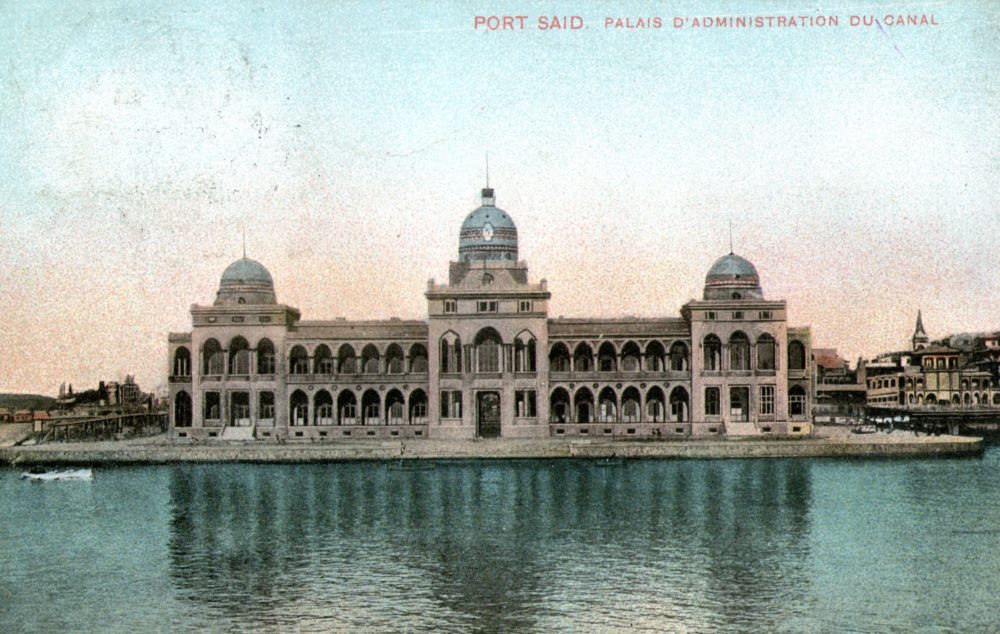 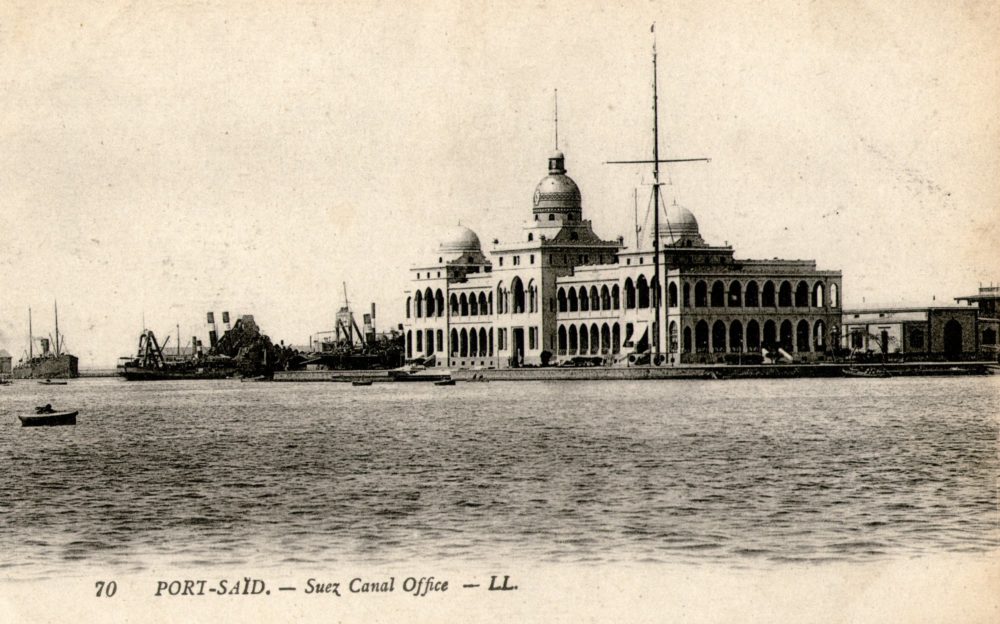 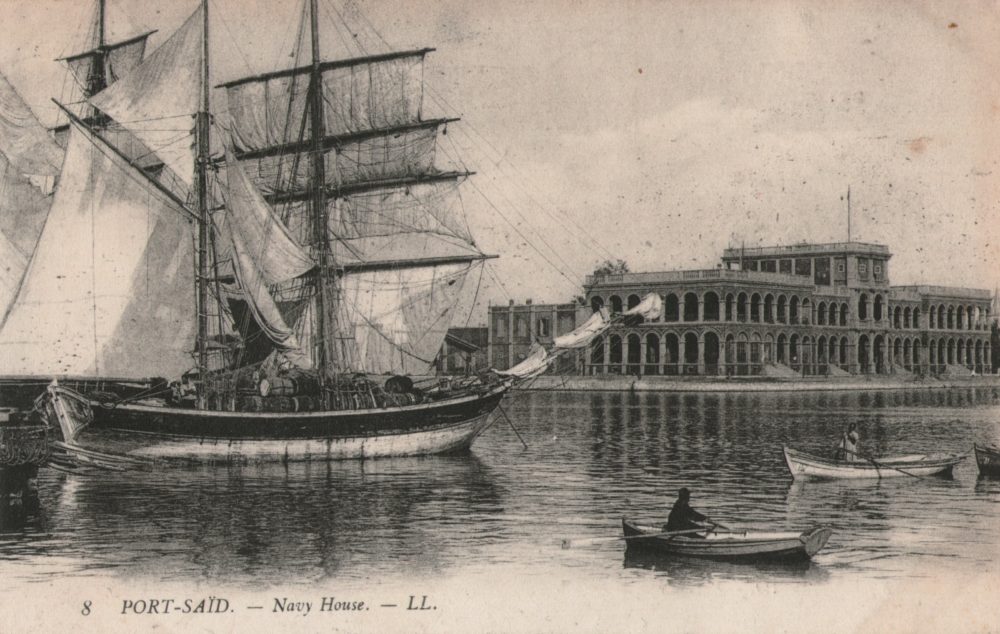 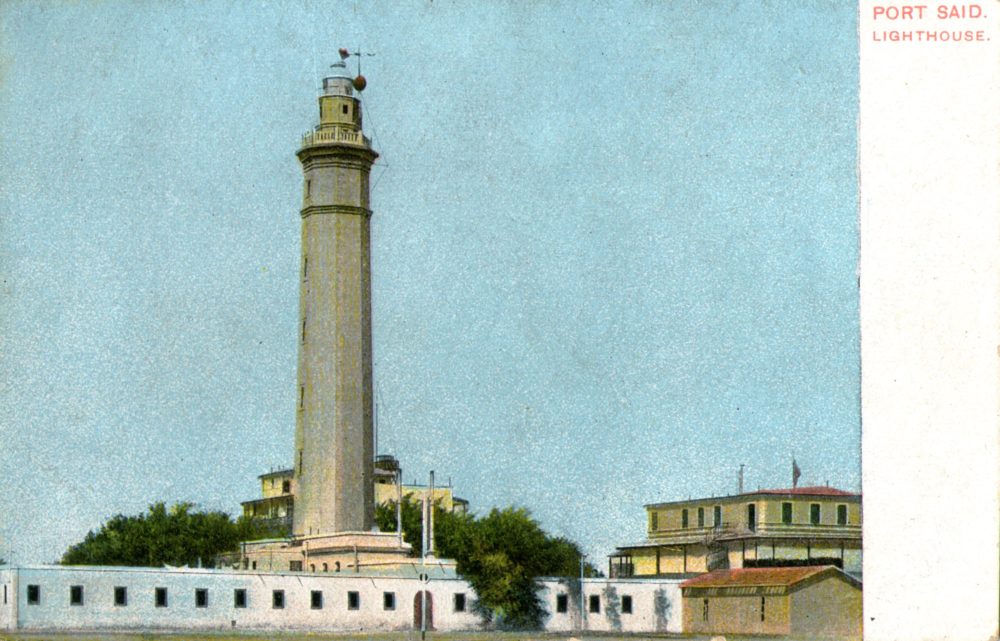 The Port Said Lighthouse is one of the most important architectural and tourist landmarks in the city of Port Said in Egypt. Considered a unique example for the evolution of architecture during the nineteenth century in the city, the lighthouse was designed by François Coignet at the request of the Khedive of Egypt and Sudan, Ismail the Magnificent. Construction was completed in 1869, one week prior to the inauguration of the Suez Canal. The lighthouse was built to guide ships passing through the canal. The lighthouse has an octagonal shaped tower that is 56 m high.
Wikipedia.

Going all the way back to the construction of the Pharos of Alexandria in the 3rd century B.C.E., Egypt has long been a nation of naval innovation. The Port Said Lighthouse was the first building in the world created with reinforced concrete. Erected in 1869 by François Coignet, the lighthouse today is the longest-standing edifice in the city, and at 56 meters (184 feet) high, it’s considered an icon of Port Said because of its elegant design. The large sphere at the top was originally used to determine the power and direction of the wind.
AFAR: Port Said Lighthouse 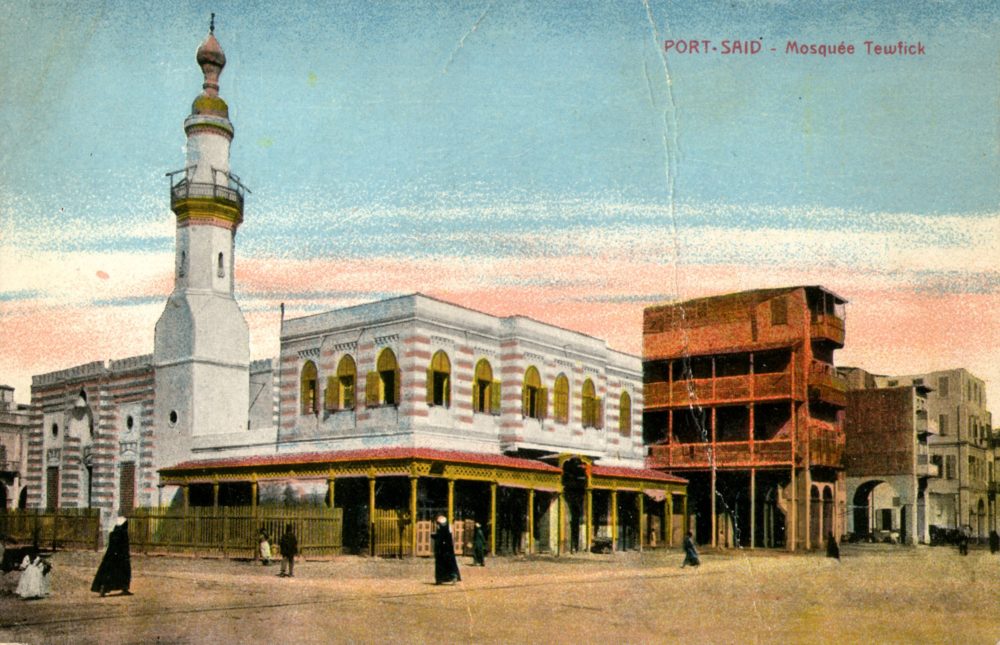 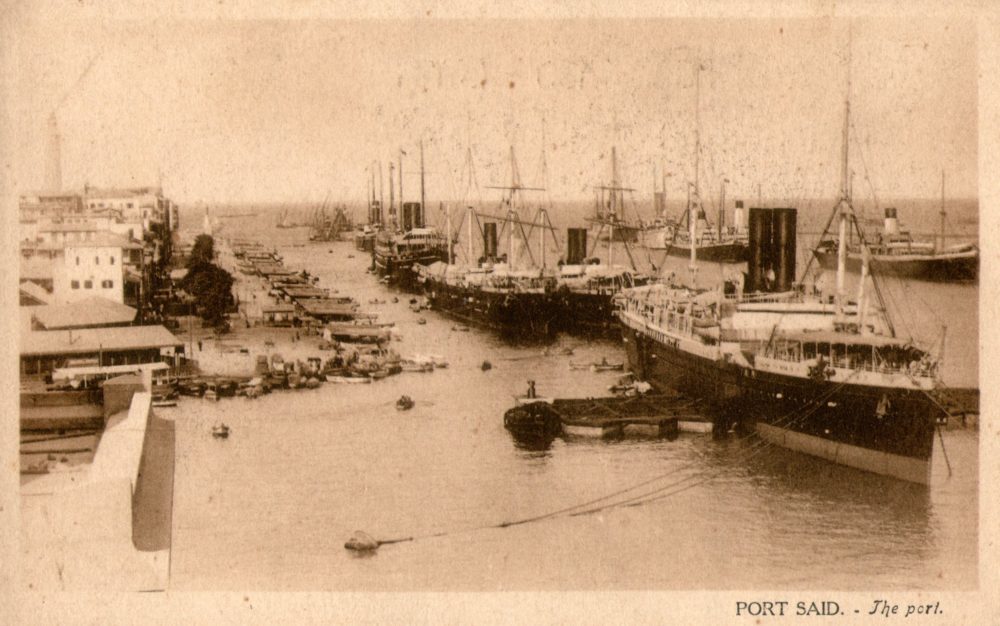 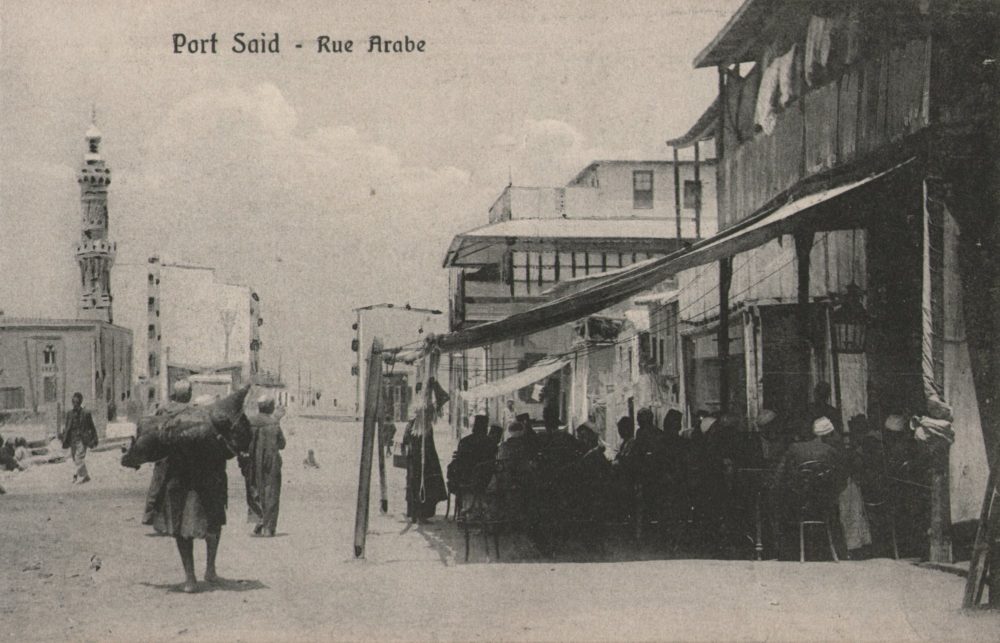 Some post cards with this image are captioned “Native Coffee House” (presumably referring to the people seated on the (right).

This is a street in the “Arab village”.  Al Abassi Mosque is on the left there, so this is approximately here on Google Maps. There is no street view but this view is close. 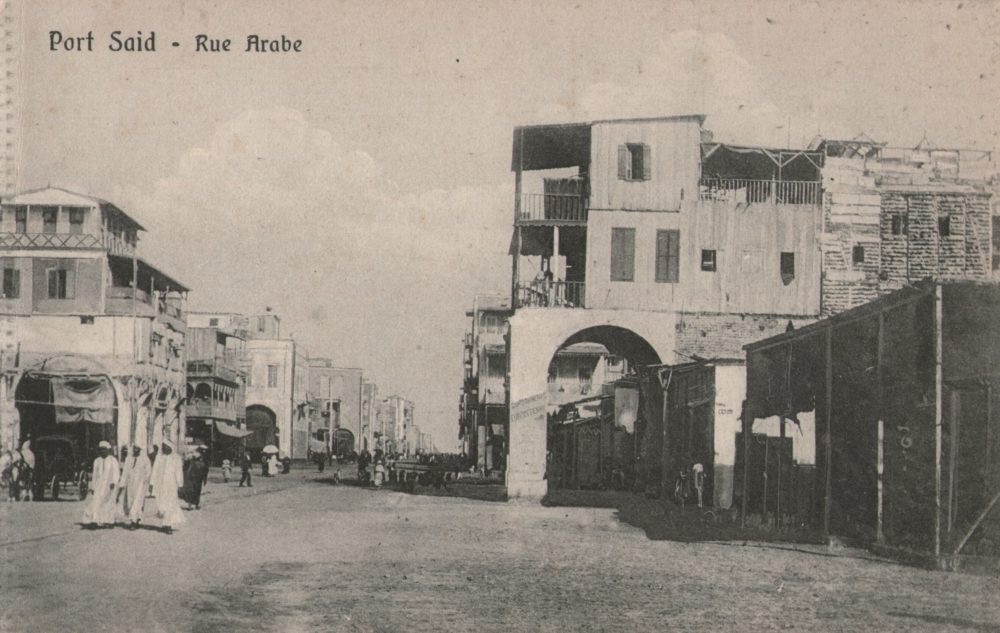 I’m not sure about the location of this one. Down the road a bit more and on the right (not visible in this image) is El-Tawfiqi Mosque, which seems to be here and there might be water in the background, so the street might be sort of around here. 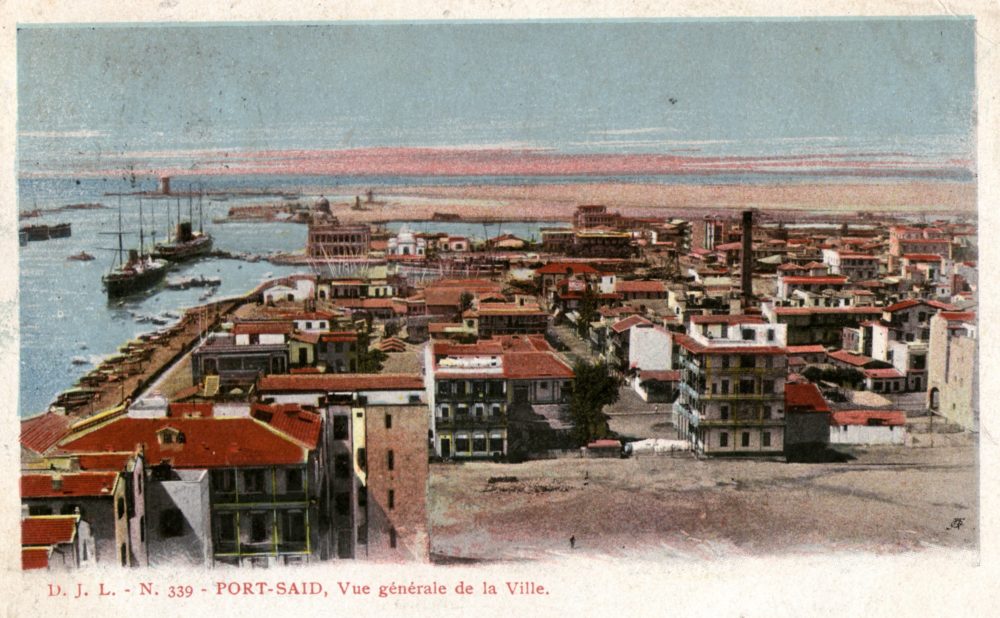 Port Said dates from 1859 and its situation was determined by the desire of the engineers of the Suez Canal to start the canal at the point on the Mediterranean coast of the isthmus of Suez nearest to deep water, and off the spot where Port Said now stands there was found a depth of 26 ft. at about 2 m. from the shore. For many years after its foundation it depended entirely upon the traffic of the canal, being the chief coaling station of all ships passing through and becoming the largest coaling station in the world.
Encyclopedia Britannica, 1911

There were no local resources here. Everything Port Said needed had to be imported: wood, stone, supplies, machinery, equipment, housing, food and even water. Giant water storage containers were erected to supply fresh water until the Sweet Water Canal could be completed. One of the most pressing problems was the lack of stone. Early buildings were often imported in kit form and made great use of wood. A newly developed technique was used to construct the jetties called conglomerate concrete or “Beton Coignet”, which was named after its inventor Francois Coignet. Artificial blocks of concrete were sunk into the sea to be the foundations of the jetties. Still more innovative was the use of the same concrete for the lighthouse of Port Said, the only original building still standing in Port Said. In 1859 the first 150 laborers camped in tents around a wooden shed. A year later, the number of inhabitants had risen to 2000 — with the European contingent housed in wooden bungalows imported from northern Europe. By 1869, when the canal opened, the permanent population had reached 10,000. The European district, clustered around the waterfront, was separated from the Arab district, Gemalia, 400 meters (1,300 ft) to the west, by a wide strip of sandy beach where a tongue of Lake Manzala reached towards the sea. This inlet soon dried out and was replaced by buildings, over time there was no division between the European and Arab quarters.

At the start of the twentieth century, two things happened to change Port Said: in 1902, Egyptian cotton from Mataria started to be exported via Port Said; and in 1904 a standard gauge railway opened to Cairo. The result was to attract a large commercial community and to raise its social status. In particular a sizable Greek community grew up. In 1907, the quickly growing city had about 50,000 inhabitants, among whom were 11,000 Europeans “of all nations”.
Wikipedia.

Anybody strolling the streets of Port Said cannot help but be struck by the omnipresence of wood in the buildings. Most of them, dating back to the turn of the century, are fronted by three- or four-storey-high wooden galleries, or verandas as they were called at the time. This remarkable architecture is found nowhere else in Egypt – or anywhere else in the world, for that matter – and sadly, it is under threat.
Port Said: Decaying Wooden Verandas Tell the Story of a City.

In the decades after 1869, the Suez Canal and the Red Sea developed into the lifeline not only of the British, but also of the French and Dutch Empires; the harbor town of Port Said at the Mediterranean entrance of the canal became a quasi-obligatory stopover during the journey between the colonies and Europe.
Cosmopolitanism on the Move: Port Said around 1900 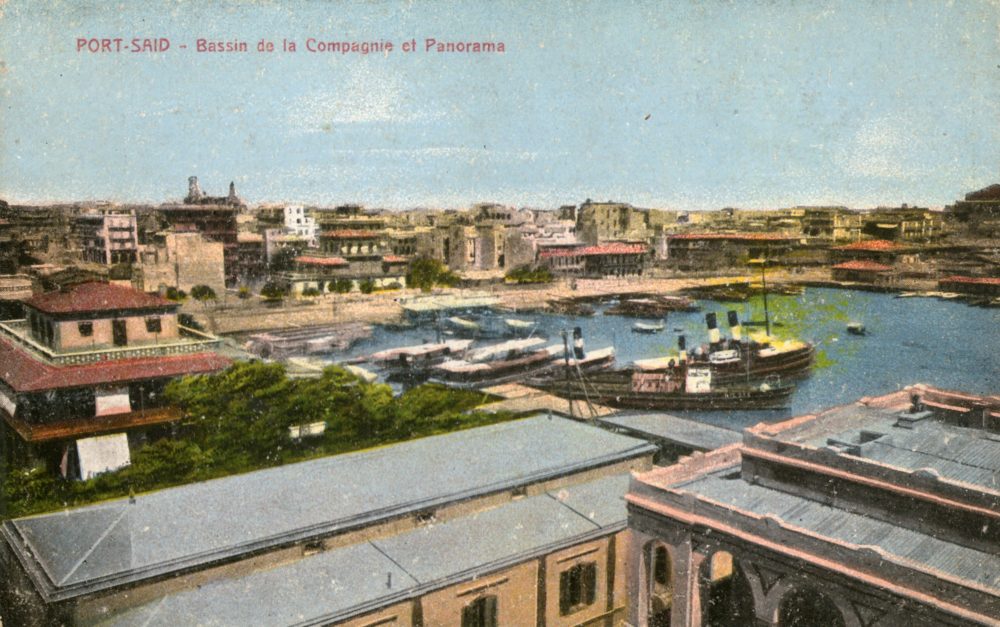 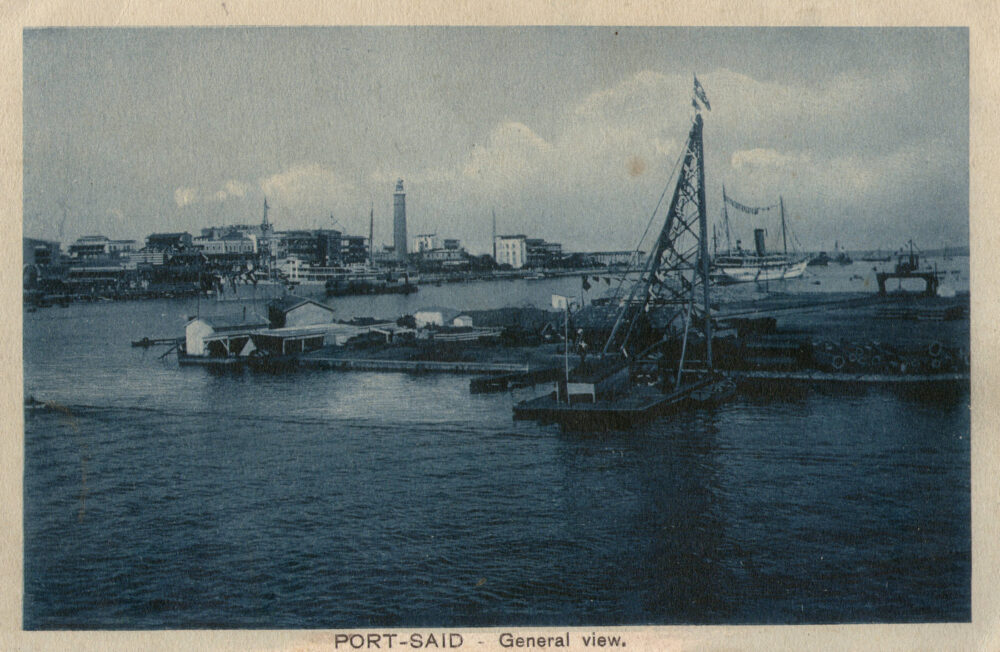