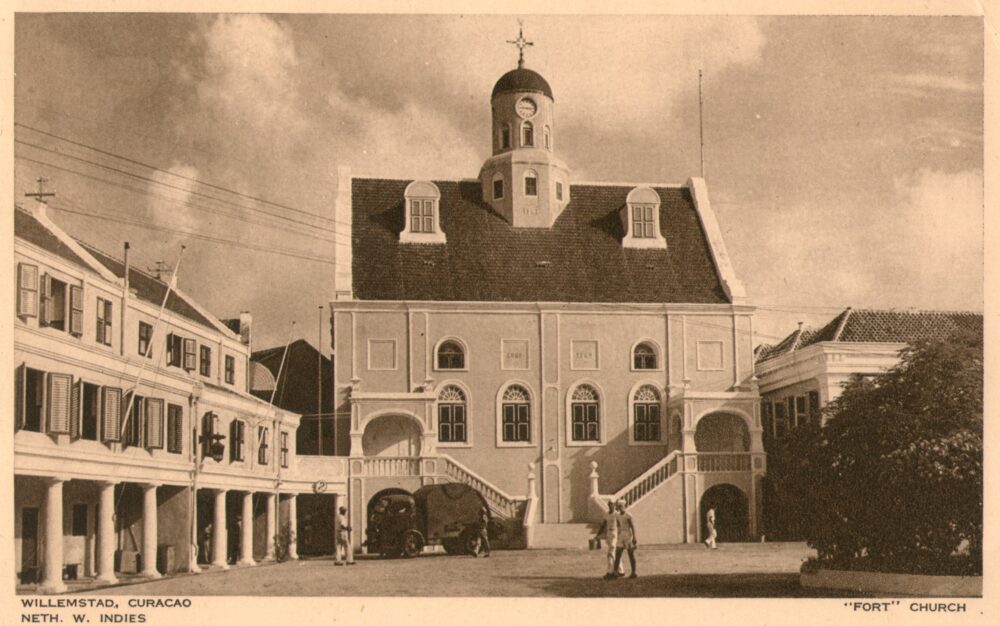 The present-day Fortchurch in historic Fort Amsterdam is the oldest church still in daily use on Curacao. Construction took place between 1767 and 1771 and the facade bears the date 1769. It is known that the construction cost 5,500 pesos (approximately 11,000 guilders), but nothing is known of the architect (although both Hendrik de Hamer and Frederik Staal were closely involved in the work). The vicarage stood next to the church on the spot that is currently the seat of the Government.

The Fortchurch is not large, (20.5 X 13.25 m), but is particularly high, with the tallest point of the tower reaching 16 meters above ground level. Given the small area of space available within the Fort, careful planning had to be done for the way it would be used. The high ceilings also doubled as an effective area in which to dry and store ship sails, which were hoisted up by pulley. The original tower of the Church was octagonal and was replaced by a round one in 1903, (which is clearly marked on the facade), designed by Mr. A.W. Statius Muller, the Head of the Building Department.
The Fortchurch

In 1804 a cannonball fired by British captain John Bligh, of HMS Theseus, hit the church. Bligh led a small squadron that captured the fort in February 1804. The ball is still embedded in the southwestern wall of the fort church
Wikipedia.