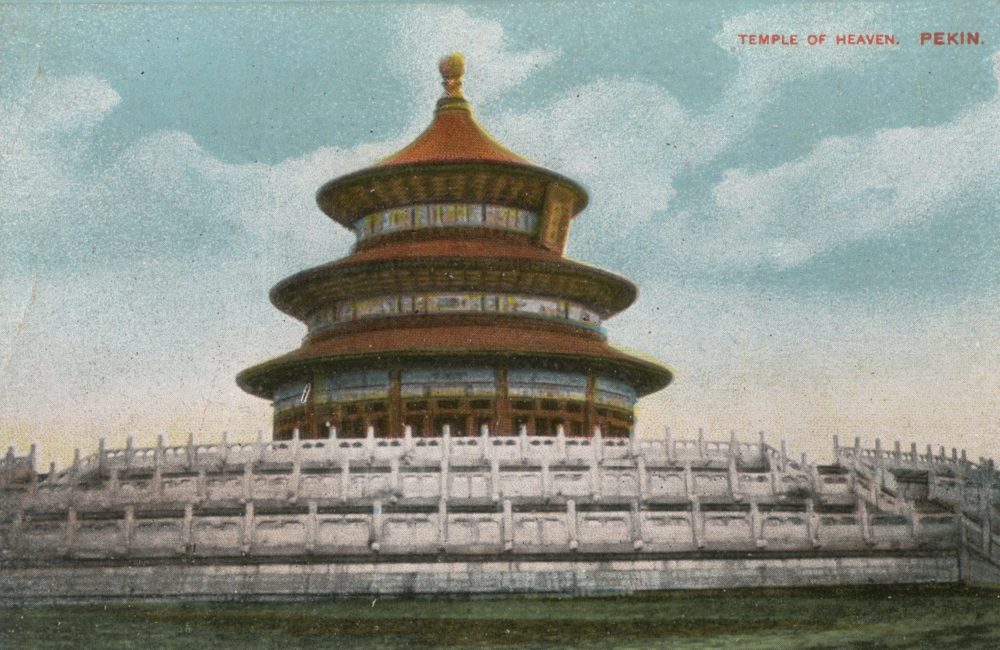 The Temple of Heaven, or more literally the Altar of Heaven is a temple of Chinese religion used for imperial ceremonies for five centuries. Its buildings are situated in their own large and tranquil park in southeast Beijing.

Construction of the Temple of Heaven began during the reign of Emperor Yongle was completed in 1420. It was used by all subsequent Emperors of the Ming and Qing Dynasties. In imperial China, the emperor was regarded as the Son of Heaven, the intermediary between Earth and Heaven. To be seen to be showing respect to the source of his authority, in the form of sacrifices to heaven, was extremely important. The Temple of Heaven was built for these ceremonies.
Sacred Destinations

The temple complex was constructed from 1406 to 1420 during the reign of the Yongle Emperor, who was also responsible for the construction of the Forbidden City in Beijing. The complex was extended and renamed Temple of Heaven during the reign of the Jiajing Emperor in the 16th century. Jiajing also built three other prominent temples in Beijing, the Temple of the Sun (日壇) in the east, the Temple of Earth (地壇) in the north, and the Temple of Moon (月壇) in the west. The Temple of Heaven was renovated in the 18th century under the Qianlong Emperor. By then, the state budget was insufficient, so this was the last large-scale renovation of the temple complex in imperial times.

The temple was occupied by the Anglo-French Alliance during the Second Opium War. In 1900, during the Boxer Rebellion, the Eight Nation Alliance occupied the temple complex and turned it into the force’s temporary command in Beijing, which lasted for one year. The occupation desecrated the temple and resulted in serious damage to the building complex and the garden. Robberies of temple artifacts by the Alliance were also reported. With the downfall of the Qing, the temple complex was left un-managed. The neglect of the temple complex led to the collapse of several halls in the following years. In 1914, Yuan Shikai, then President of the Republic of China, performed a Ming prayer ceremony at the temple, as part of an effort to have himself declared Emperor of China. In 1918 the temple was turned into a park and for the first time open to the public.
Wikipedia

Qinian Hall (Hall of Prayer for Good Harvests) is most magnificent building in the Temple of Heaven. It is a wooden triple-gable circular pavilion which is 38 meters high with a three-level marble stone base. The ancient emperors prayed for good harvests here. There are 28 pillars propping up the hall. The inner 4 pillars are large, and stand for four seasons. The middle 12 pillars represent the twelve months. The outer 12 pillars indicate 12 periods of a day.

Huangqiongyu Hall (The Imperial Vault of Heaven) is smaller with only one circular gable and one level of marble stone base compared with Qinian Hall. It is the place to enshrine the worshiping tablets of Gods. Inside the hall are pillars and vault decorated by beautiful paintings and carvings. Outside is a circular wall – Echo Wall which can transmit sounds over long distances.

Huanqiu Altar (The Circular Mound Altar) is an empty circular platform with three levels of marble stones. Vivid dragons were carved on the stones to stand for the emperors. The number nine stands for power as well as the emperors in ancient China. You will surprisedly find the balusters and steps are either the sacred number nine or its multiples. In the ancient time, the emperors burn the offerings for Heaven in a stove on the platform.
China Discovery