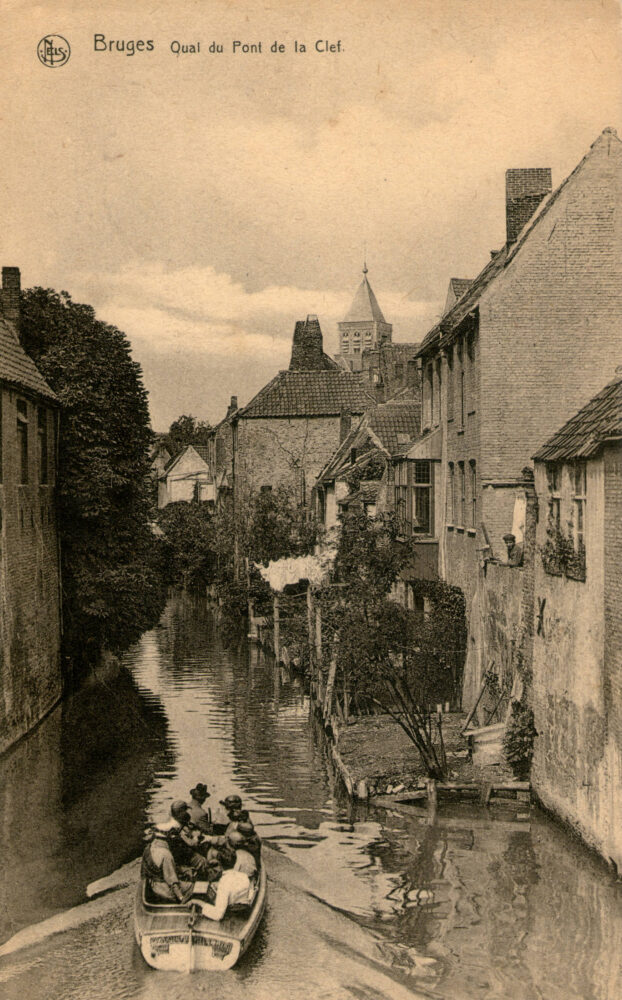 The 83-metre high Belfort (belfry) from the 13th century is one of the three iconic towers of Bruges, together with the towers of Onze-Lieve-Vrouwekerk (Church of Our Lady), and Sint-Salvatorskathedraal (St Saviour’s Cathedral). Those who climb the 366 stairs are rewarded with an impressive view of Bruges and surrounds.
Musea Brugge

Belfry
The Belfry of Bruges is a medieval bell tower in the centre of Bruges, Belgium. One of the city’s most prominent symbols, the belfry formerly housed a treasury and the municipal archives, and served as an observation post for spotting fires and other danger. A narrow, steep staircase of 366 steps, accessible by the public for an entry fee, leads to the top of the 83 m (272 feet) high building, which leans 87 centimeters to the east. . . . The belfry was added to the market square around 1240, when Bruges was an important centre of the Flemish cloth industry. After a devastating fire in 1280, the tower was largely rebuilt.
Wikipedia.

St Saviour’s Cathedral
The Saint-Salvator Cathedral, the main church of the city, is one of the few buildings in Bruges that have survived the onslaught of the ages without damage. Nevertheless, it has undergone some changes and renovations. This church was not originally built to be a cathedral; it was granted the status in the 19th century. . . . The roof of the cathedral collapsed in a fire in 1839. Robert Chantrell, an English architect, famous for his neo-Gothic restorations of English churches, was asked to restore to Sint-Salvator its former glory. At the same time he was authorized to make a project for a higher tower, in order to make it taller than that of the Onze-Lieve-Vrouwekerk [Church of Our Lady]. The oldest surviving part, dated from the 12th century, formed the base of the mighty tower. Instead of adding a neo-Gothic part to the tower, Chantrell chose a very personal Romanesque design. After completion there was a lot of criticism and the royal commission for monuments (Koninklijke Commissie voor Monumenten), without authorization by Chantrell, had placed a small peak on top of the tower, because the original design was deemed too flat. The Neo-Romanesque west tower is fortress-like 99 meters high.
Wikipedia. 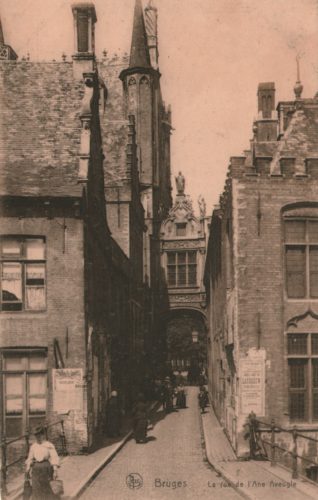