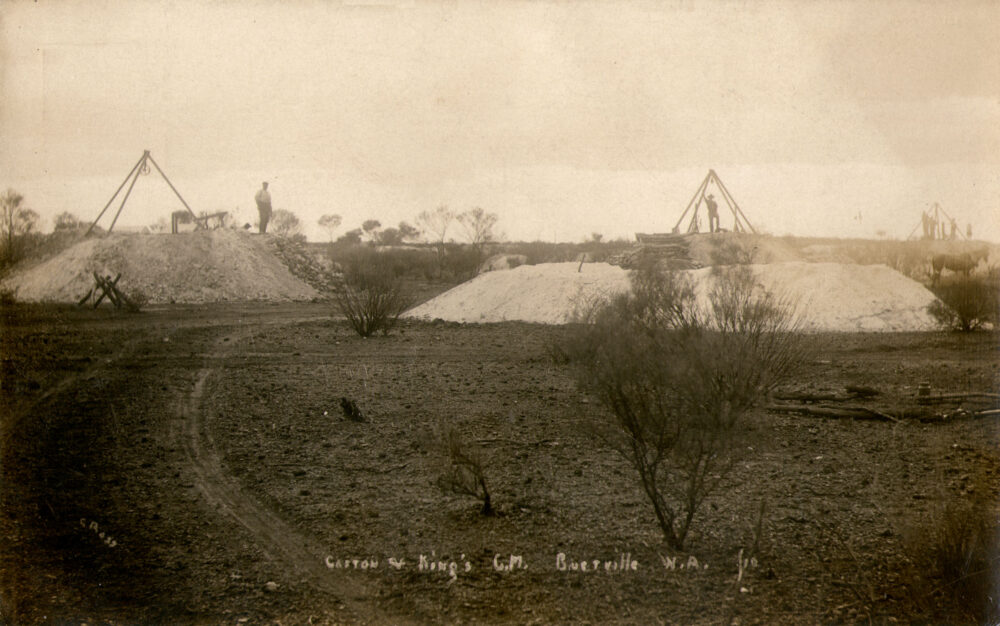 Burtville is an abandoned town in the Goldfields-Esperance region of Western Australia, located 29 kilometres (18 mi) south east of Laverton. In 1897, Gold was discovered in the area by two prospectors, B. Frost and J. Trugurtha. The surveyor, J. Rowe, planned the town lots in accordance with the Goldfields Act in 1901. The settlement was initially known as Merolia which is the Indigenous Australian name for the district. The town was eventually named after the grandson of the first chief justice of the Western Australian Supreme Court, Sir Archibald Burt. Archibald Edmund Burt JP was the chief mining warden of the Mount Margaret Goldfield.
. . .
The population of the town and district rose to approximately 400 by 1903 as a result of gold mining. The town also had a water supply from a government well and a sealed pan sanitation system. A police station was opened in 1903 along with a school and two hotels. A ten stamp state battery and five stamp battery known as The Burtville Ore Reduction works were operated within the town from 1903 to 1906. Another privately owned ten stamp battery that allowed public access known as The sons of Westralia was also operating at the time. By 1916 the population had reduced to 45 and the police station was closed.
Wikipedia.

The Nil Desperandum was the original lease pegged on the field by its discoverers Billy Frost and James Tregurtha . . . in 1897. They gave the Nil Desperandum away, and instead worked the Wanderer lease for two years, which turned out a low grade affair. . . . From 1905 to at least 1920, Thomas King and Herbert Gaston owned the mine. Both appear to come from Adelaide, or least had residences in Adelaide during the period. King took no active part in the mine, relying on a dozen telegrams a day from Gaston, detailing all aspects of operations. Gaston was a former Major at Southern Cross, the postmaster at Burtville, and also a Justice of the Peace, which carried the responsibilities of a law judge in the town. The following is enlightening:

“Probably the most interesting thing at Burtville is the administration of the law. This is dealt out at periods when policeman Manning musters up a sufficient number of derelicts to warrant a court, over which an affiable party named Gaston, being the only J.P. in the district, presides in a building about the size of a couple of horse boxes. No matter how heinous the offence, the penalty rarely goes beyond the limit of a half a crown fine”. The writer goes on to say Gaston has to put up with the dregs of Burtville in his court, loathes his J.P role, and escapes as soon as he can back to his mine.

Around 1912, Gaston began expanding the lease, with neighbouring Surprise, Away from Home, Away from Home South, Golden Bell North, Adelaide, and Bateman Hill leases acquired. Development took place at least on the last three, and were said to be joined underground to the Nil Desperandum. In 1922, Gleeson and party, Richards and party, and Smith and party are all operating on the lease.
mindat.org

Sir,— I am sorry to have to trouble you again with one of my letters, but this one is not a personal letter. It is one for the public. I went to Burtville on Sunday to see Messrs. Gaston and King’s mine, the Nil Desperandum. I will give you my opinion of it as it looks now. I may be wrong, but I will give it. Mr. Gaston, the manager, was very kind to me and showed me around. The dump for the battery to look at it one would pass it by, as it does not look any different from any other, but when you break the stone or lode matter you can see gold in most of it. The battery will tell, and if I am not mistaken it will astonish the mining world. We went down ladders for 50ft. Then 40ft. or 50ft. west is the golden belt. It is not a reef, nor is it a lode. I don’t know what to call it. It has been driven on for 56ft. and they are not through it. Mr. Gaston knocked down about 50lb. of stone at the end of the 56ft. which showed splendid fine gold. It may go on for 50ft. or 100ft. more. There are no signs of any large stones whatever. As it looks now it means wonderful discovery for the mining world. I think it will be worked by an open cut, as it may be 100ft. wide. If it turns out as it looks it means another Kalgoorlie. The formation is on the west side of the general working on the lease. The work done on the lease is a credit to the holders. There is nothing whatever to lead one to believe such a thing was below. There are no signs of a reef of any kind. The shaft was put down, and the drive put in for mining exploring, and the explorers got their reward, which they must be given great credit for. Mr. Gaston takes things very quietly; yet he must know what it means to him and to the public also. Of course no one can tell until it is opened up, but one thing is certain, and that is that it is not a rich patch only. — Yours, etc.,
F. H. HANN,
Nambrook, 17th September.
This letter is taken from the last issue of the “Laverton Mercury,” and the hope of the many, friends of Messrs. Gaston and King is that Mr. Hannwill prove to be a true prophet.
Coolgardie Miner, 4 October 1913