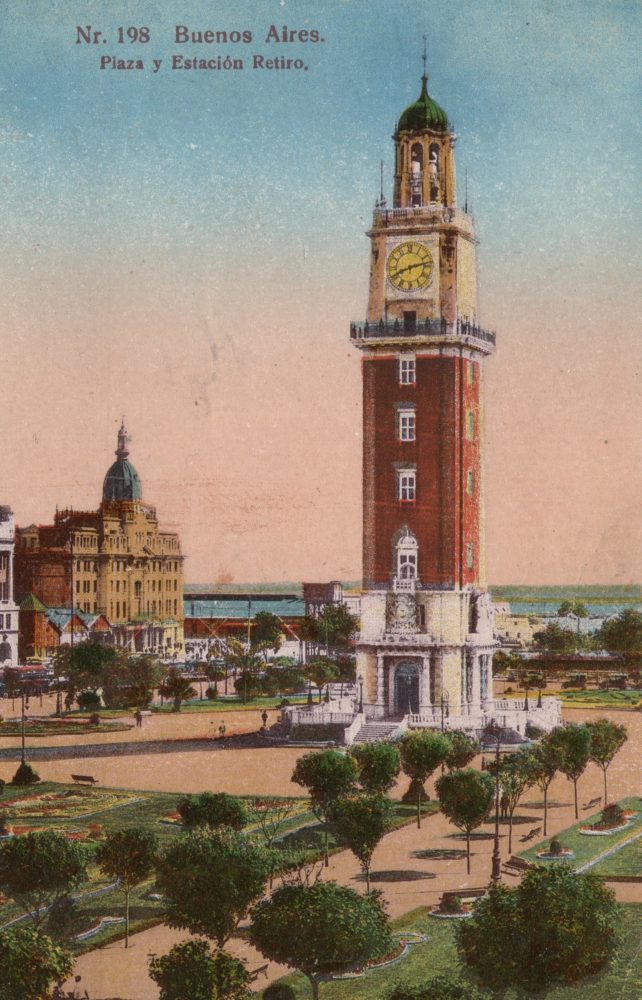 Torre Monumental (Spanish for “Monumental Tower”), formerly known as Torre de los Ingleses (“Tower of the English”), is a clock tower located in the barrio (district) of Retiro in Buenos Aires, Argentina. It is situated in the Plaza Fuerza Aérea Argentina (formerly Plaza Britannia) by San Martín Street and Avenida del Libertador. It was a gift from the local British community to the city in commemoration of the centennial of the May Revolution of 1810. After the Falklands War in 1982, the tower’s original name was dropped, though some still call it Torre de los Ingleses.

On September 18, 1909 the Argentine National Congress passed Law N° 6368, consisting of an offer by the British residents of Buenos Aires to erect a monumental column to commemorate the centennial of the May Revolution. Although the centenary monument was initially considered to be a column, it ultimately took the form of the clock tower. A 1910 exhibition of project proposals at the Salón del Bon Marché, today the Galerías Pacífico, resulted in the jury’s award to English architect Sir Ambrose Macdonald Poynter (1867–1923), nephew of the founder of the Royal Institute of British Architects. The tower was built by Hopkins y Gardom, with materials shipped from England such as the white Portland stone and the bricks from Stonehouse, Gloucestershire (see below). The technical personnel responsible for the construction also came from England. . . . The inauguration of the building took place on May 24, 1916 and was attended by the President of Argentina Victorino de la Plaza and British dignitaries led by the minister plenipotentiary Reginald Tower.
Wikipedia.